It Was A Skid Row Christmas: Feeding some of the 50,000 Homeless in LA

There are 50,000+ homeless humans in LA County and as I had no holiday plans this year, I decided to try and feed one hundred people on Christmas Day. I sent 30 text messages on 21st& 22ndof Dec asking the recipients to make a financial contribution and/or volunteer on Christmas Morning for a couple of hours on Skid Row in Downtown L.A. 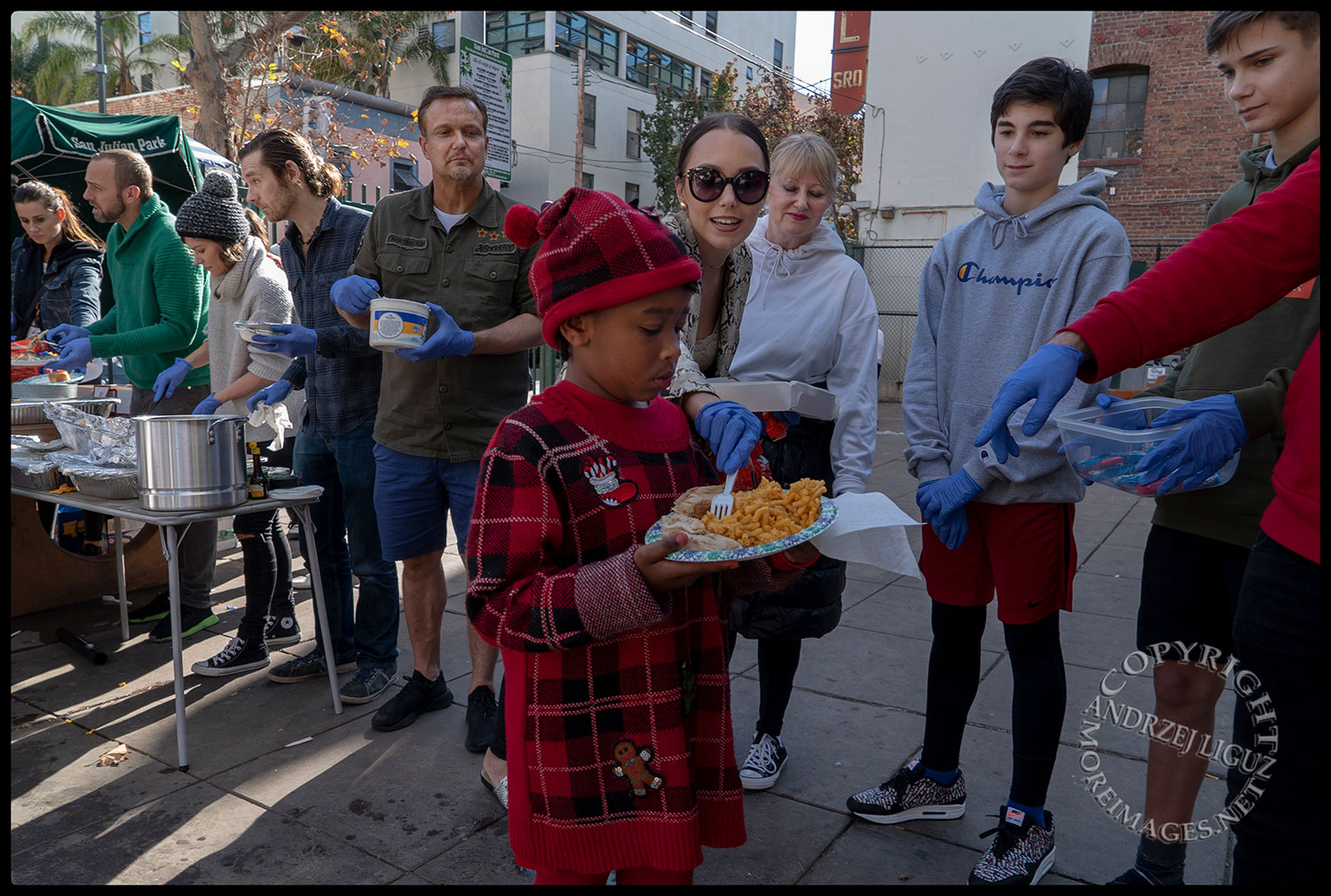 The response blew me away. In four days thirteen people donated sums ranging from $25 to $200 totaling just over $1000 with which to buy food. I was surprised and delighted when (the very cool) Ayler and his (equally cool) partner Naz also offered to come shopping at Costco and help prepare food. 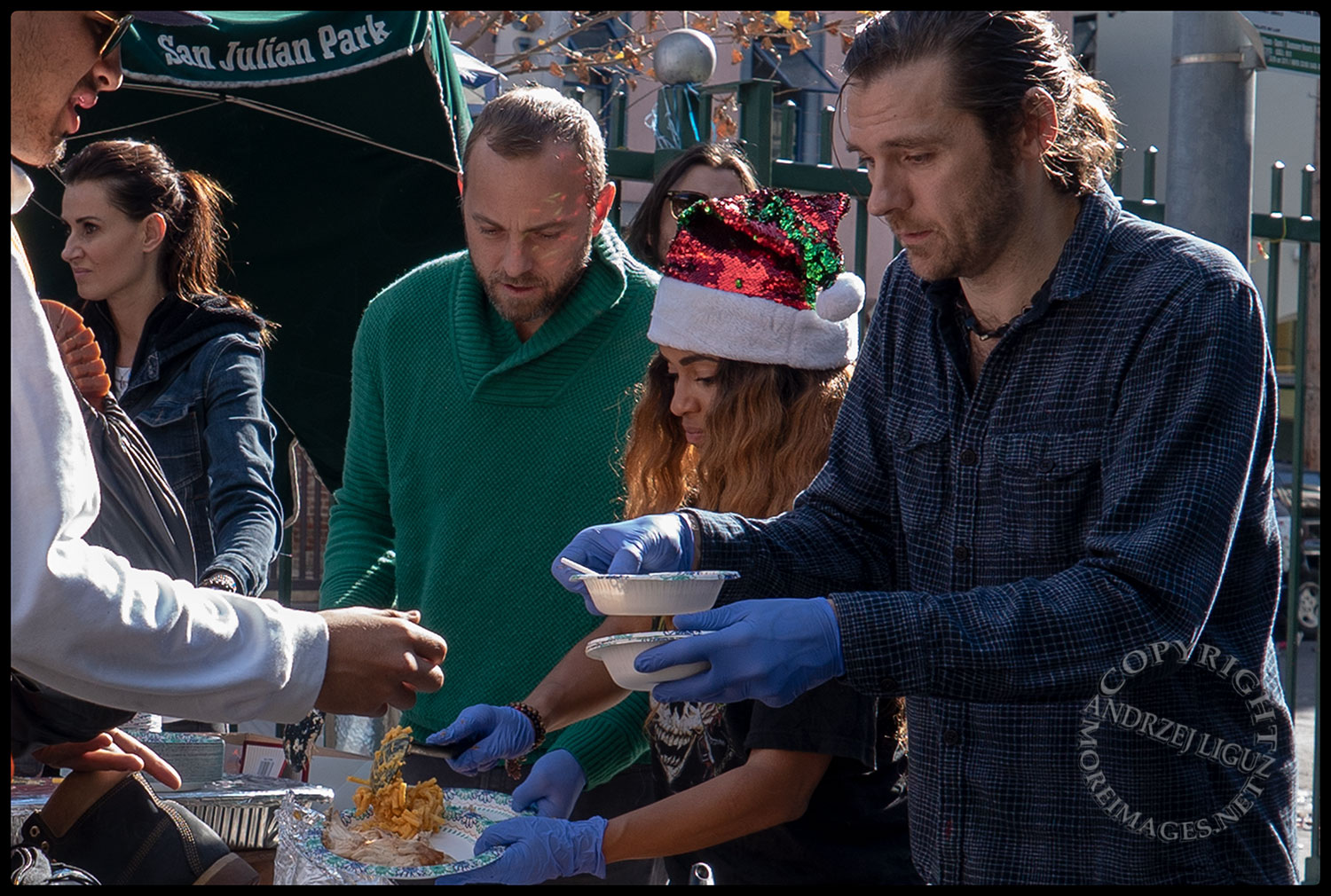 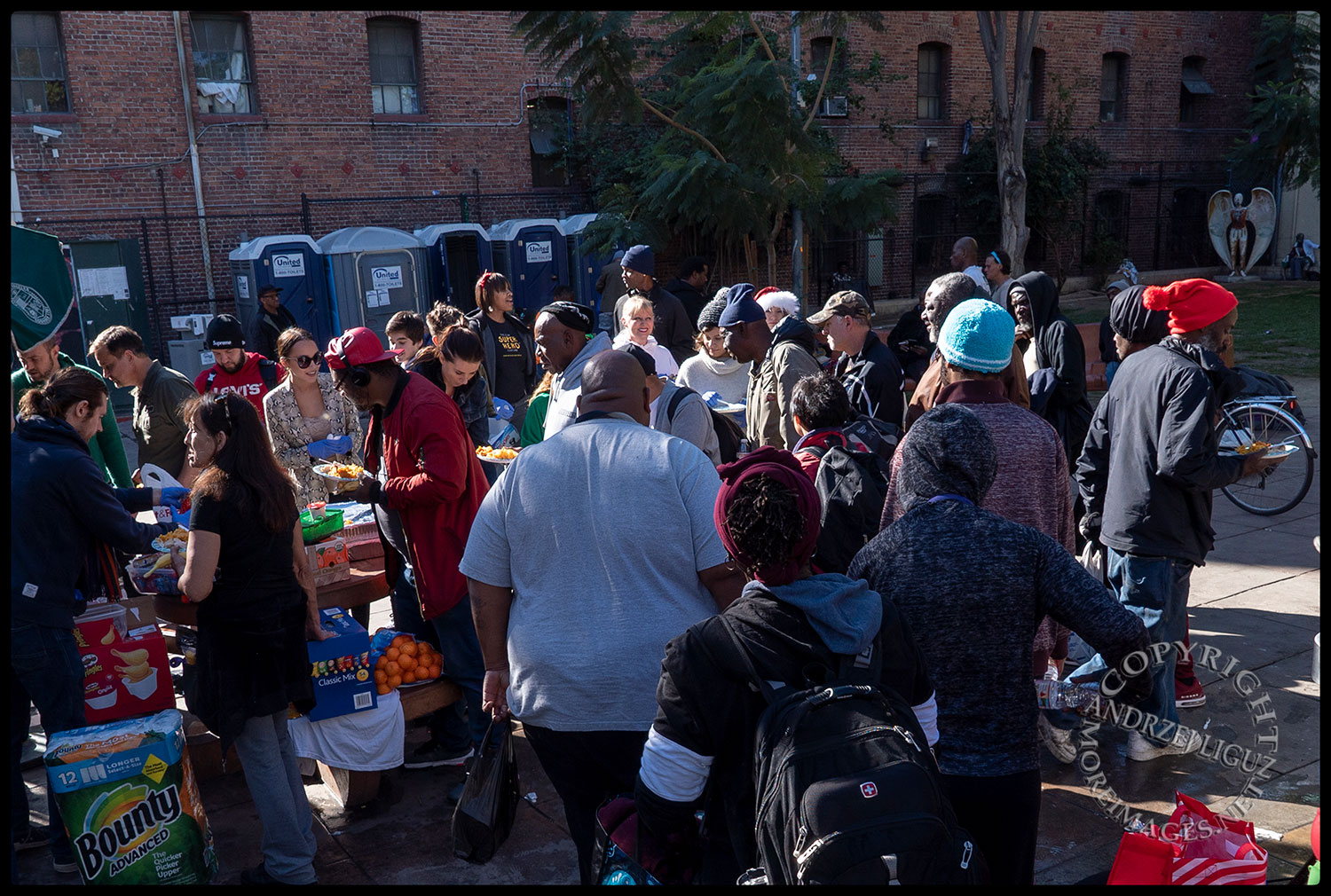 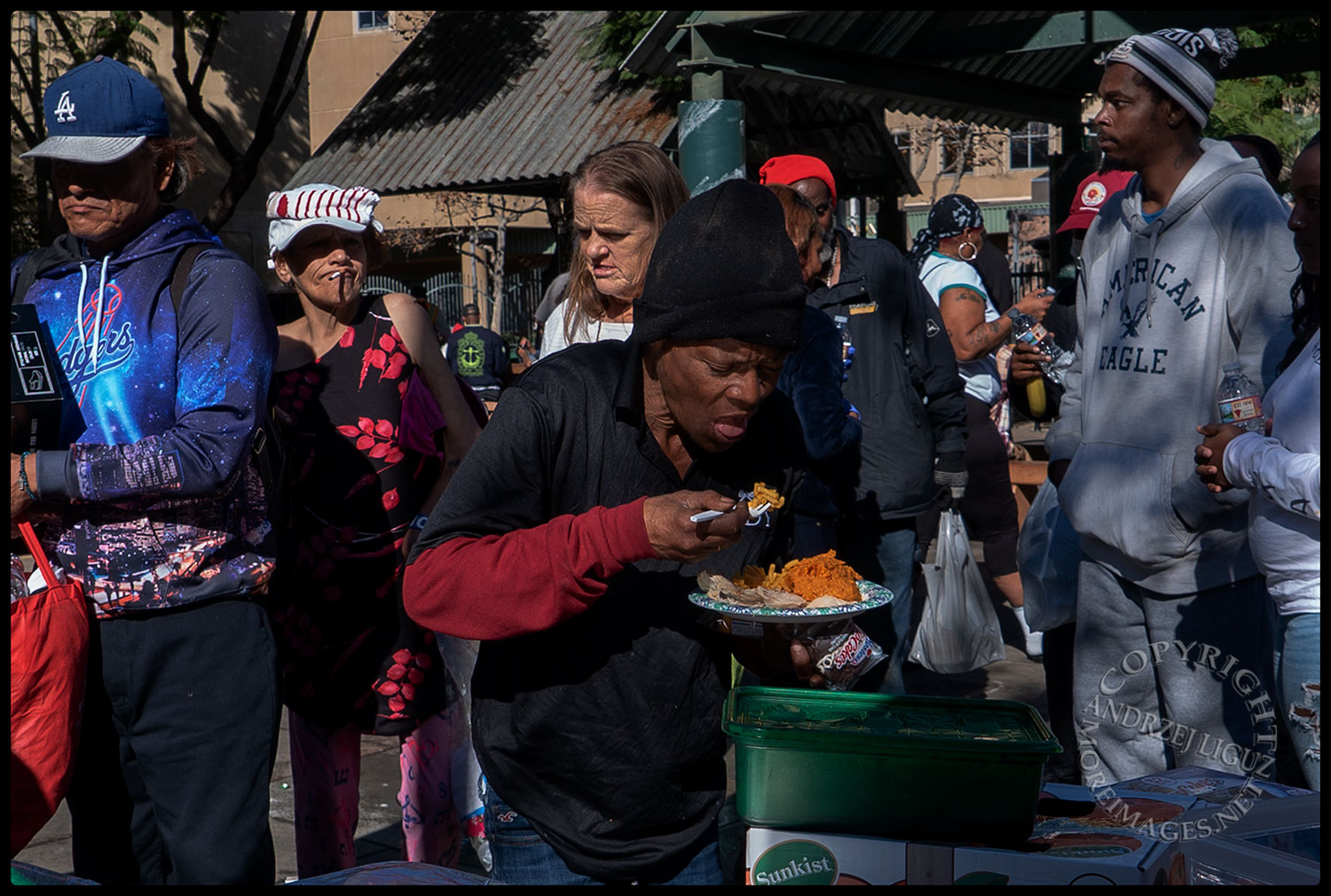 I’ve done this kind of thing before and learnt along the way that even though I haven’t eaten meat for over 35 years and eat reasonably healthy, most Americans who live on the streets love roast chicken, mac and cheese and not particularly healthy snacks.

So I called the Costco close to Venice Beach, where a full roast chicken only costs $5 and ordered 20 Roast chickens to be collected at noon on Christmas Eve. As more money than expected showed in the time between me ordering and picking them up, I ended up buying 30 roast chickens instead. Ayler and Naz met me at the Costco and the three of us wandered its cavernous depths collecting romaine lettuce, bags of mandarins, bunches of bananas, packets of buns, boxes of Twinkies and bottles of water. Lots of bottles of water. And plates and paper towels and cutlery and all the other stuff required to feed a volume of people.

I was enormously relieved and grateful when Ayler and Naz took the roast chickens back to their place in the Hills. As mentioned before, I don’t eat meat and although I was ready to prep the chickens for Xmas lunch, I was definitely not looking forward to doing that in the confines of the RV. As it turned out, Ayler and Naz stayed up until 3am stripping 30 chickens to fill 4 big trays with meat and also made 5 big trays of mac n cheese and 2 big trays of a phenomenal yam and marshmallow dish. Respect and Thanks. (NB: After feeding lunch on Skid Row, Naz went home and cooked another couple of big trays of food for friends dropping by later…MASSIVE  respect)…

After packing the remainder of the food, water and other stuff into the RV, I drove from Venice to one of my regular LA parking spots on Moulton Ave outside The Brewery, a magnificent artists colony in a converted brewery that’s home to 800 artists across 300 studios just north east of downtown LA. And about 10 minutes drive from Skid Row. I parked up for the night and proceeded to cook two giant pots of my mothers Polish vegetable soup. I got to sleep late and woke up early to clean out the RV and get it ready to deliver food. We’d arranged for anybody who wanted to help to meet at the end of Moulton Ave at 11am on Christmas morning.

Thanks and Respect to them all.

After I gave a brief orientation talk giving some context of what we could expect down on Skid Row, we rolled downtown in a convoy of three vehicles with me leading the way in the RV and Ayler’s friend Anisa riding shotgun. She moved to LA early in 2018 and was shocked when she saw the tents on the sidewalks of Skid Row with hundreds of people milling about on the streets as she had no idea that any of this existed in LA.

We pulled up to San Julian Park, which happens to be the only (tiny) patch of greenery in that whole neighborhood and proceeded to set up just inside the gates of the park. As sometimes happens in these situations, when the famished descended it was a mad free for all for the first few minutes until I stepped in and organized the crew with specific jobs and encouraged the hungry to line up in single file so complaints about people cutting the line disappeared.

After about thirty minutes I was informed that some people were going through the line a third time, so I gave the order to pack up and move on to a new location. We drove around a couple of blocks looking for a suitable place to pull over and settled on the corner of 6thand San Julian, where we fed people for another thirty minutes before running out of food.

Initially I thought we’d fed over 400 people, but in reality and on reflection it was closer to 300. Which was still considerably more than the one hundred I was hoping to feed. We all had a truly extraordinary day and some of the people were so inspired they wish to start feeding people down at Skid Row on a regular basis. So we are now looking at doing this on the last weekend of every month and I will be calling a meeting on the weekend of 19th/20thJanuary for anyone who wants to become involved. If you are interested in helping, whether financially or with time, please email your details to more@moreamericandreams.com with MORE Food in the header and I will let you know what we are doing and when.

Aside from feeding people, one of the important things we did was to show what a small group of committed individuals can achieve when they stand together for a common good – we don’t need to wait for governments or charities, we can do something ourselves as individuals and make a real difference.

I have a history of this kind of proactive behavior with a belief in collective responsibility as well as individual responsibility with a healthy sense of adventure. And in that vein, this was a combined MORE (Ministry Of Random Events) and MAD (MORE American Dreams) event. Having lived in seventeen towns across six countries I am currently living in a 30′ RV whilst I’m shooting a book and multi-part documentary series about ‘Looking for the American Dream‘ and plan to be back out on the road soon….email your info if you want to be included in the mailing list…