Jeff Buckley drowned sixteen years ago today. I was fortunate enough to do a photo session with him as well as photograph him performing on his first Australian tour. The majority of my pictures have never been seen before as I did not automatically go out and sell them for everything I could get when he died. 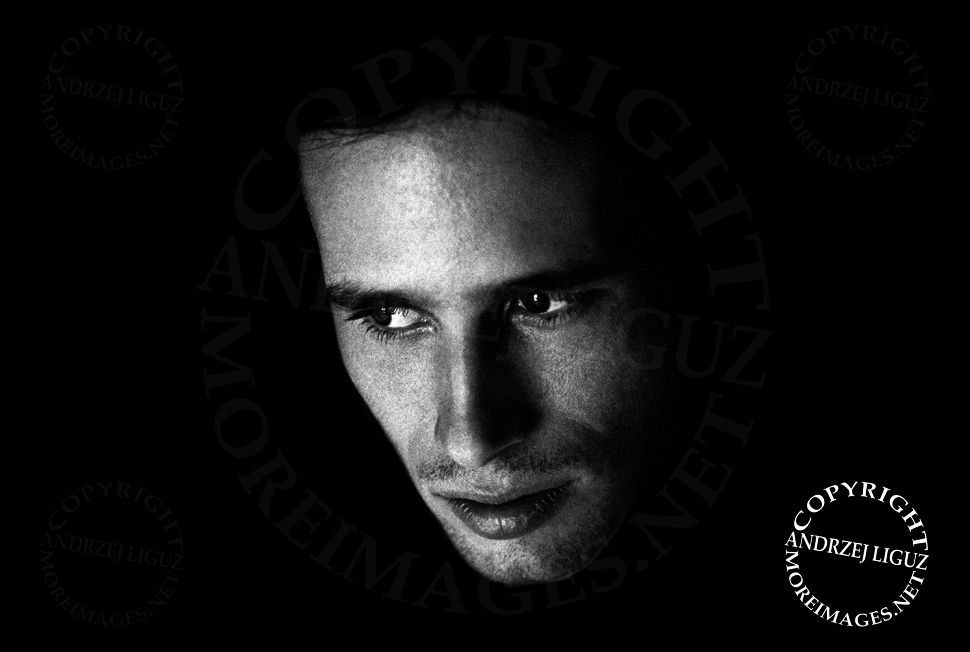 He was only thirty years old when he shuffled off this mortal coil, but the music he made and the images he left behind means that he is kept alive in our collective memories as that young man with the golden voice.

I first heard Grace about a month after it came out in August 1994. John Parker, who is now a big shot at Sony in Sydney but back them was a lowly publicist in Melbourne, gave me the album and told me it was the greatest piece of music he’d heard in years. I took his opinion with a pinch of salt as I’ve heard that so many times from publicists that I just don’t believe them anymore.

I’d listened to a lot of Tim Buckley and when I first heard of Jeff I was immediately put in mind of Julian Lennon. He showed so much promise but at the end of the day never lived up to the expectation. He could never be John. It’s tough being the child of a successful rock star. How many have succeeded? Not many. And now, ironically enough from my point of view, Julian has chosen photography as his principal form of creative expression. He’s not bad too.

I took Grace home and listened to the first couple of songs. I wasn’t feeling too well and they were a bit too overblown and loud for my frame of mind. So I put on another album. I can’t even remember what it was now. Grace sat there on my shelf for the next few months.

Towards the end of 1994 I noticed that a ridiculously large number of critics had placed the album in their top ten lists. Along with the debut albums from Oasis and Weezer, Parklife from Blur, Dummy from Portishead, Illmatic from Nas and offerings from Soundgarden, Nirvana and Green Day. So I figured as I already had it, I should give it another chance. 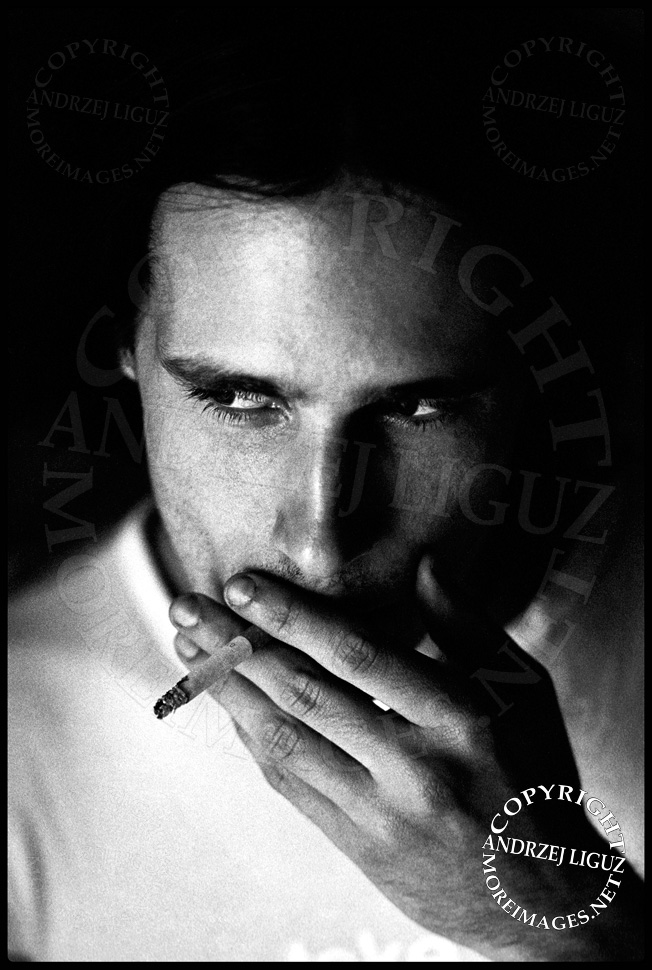 I still didn’t rate ‘Mojo Pin’ and ‘Grace’ that highly, but when ‘Last Goodbye’ came on I sat up and started taking notice. ‘Lilac Wine’ was a revelation. The cascading chords of ‘So Real’ danced across the room. I started to realize there was a reason why so many critics were swooning over this album.

‘Hallelujah’ was transcendent. We all know it so well now, but do we remember the first time we heard it? I do. It’s the moment I became a total fan. It’s a genuine tour de force and still one of the greatest vocal performances ever recorded. To this day I still get shivers every time I hear it.

‘Lover, You Should’ve Come Over’ is a song from every lover to the one they wanted. Every lonely night waiting and pining for a loved one has been filled with that song playing on repeat in bedsitters all over the world. The Smiths could never be so plaintive.

‘Corpus Christi Carol’ is a hymn dating from the 1500’s and is infused with the delicacy of gossamer wings on a butterfly. You could just sense the girls swooning and wanting to pull Jeff to their breasts the first time they heard it.

The stomp of ‘Eternal Life’ was a serious clarion call after the stillness created by ‘Corpus Christi’. And then we are drawn into ‘Dream Brother’. A stunning raga like meditation that builds into a crescendo of sound driven by the drums of Matt Johnson. And all topped off with that golden voice.

I couldn’t believe that I’d left this album sitting on the shelf unheard for four months. I immediately put it back on again. And again. By the end of the day I knew it well.

This was the child of a rock star who had truly surpassed the legacy of his father. And with only one album under his belt. It was hard to believe, but it was true.

Jeff toured the world for 1994 and 1995 in support of Grace. I read reviews that breathlessly described his vocal gymnastics and wondered if he was going to make it to Australia, or bypass it like so many other baby bands do. It costs so much money to get there that it’s hard to justify the journey.

I finally heard that he was coming to play a series of small Sydney and Melbourne shows in August 1995. At the time I was shooting a lot for Who Weekly, a sister magazine to People magazine in the USA. About a week before Jeff was due to play I was delivering some pictures to Who Weekly and got into a conversation with the Picture Editor, Stephanie Strange. I asked her if they were planning to do anything with Jeff whilst he was in town. To my surprise she told me they’d just booked a photographer to do a shoot with him. 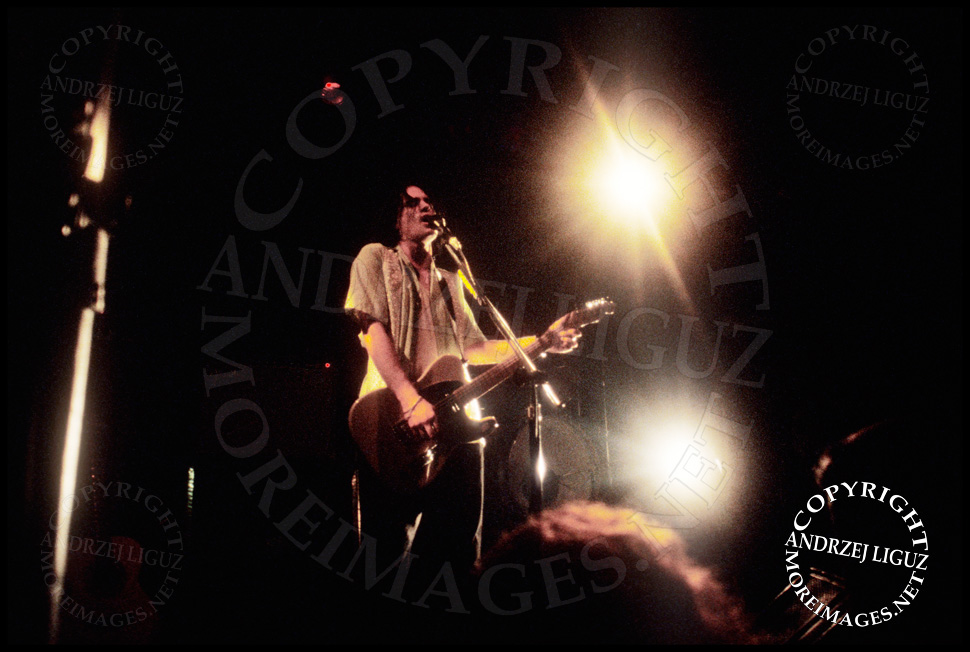 This is the only time in 25 years of working as a photographer that I was absolutely determined that I wanted that shoot. So I told Stephanie she had to let me do it. It didn’t matter that somebody else was booked, I had to do the shoot. I was lucky that we’d been working together for a couple of years and knew each other well enough by that point as she laughed and said she’d see what could be done.

Even though I was one their main freelancers at that time, I didn’t really think she’d change the photographer so started calling around some of the other magazines to see if I could shoot Jeff for someone else.

I was getting nowhere as everybody had already booked their photographers, when to my amazement Stephanie called me the next day and told me that she’d dumped the other photographer and I was doing the shoot with Jeff. I was over the moon.

And so on the afternoon of Wednesday 30th August 1995, I made my way to the Ritz Carlton in Double Bay, which is known by Sydneysiders as Double Pay because it’s the seriously rich part of town and everything costs twice as much. That particular hotel also happens to be where Michael Hutchence from INXS subsequently died two years later. But I think that was in a different room.

I was shown into Jeff’s suite by his road manager, Gene Bowen. Jeff appeared tired but was sweet and accommodating. He’d played a show at The Metro two days earlier, but I suspect the jet lag was getting to him. When I mentioned that I’d listened to his dad a lot it seemed like it was something he was tired of hearing. Which was fair enough, so I didn’t pursue that line of conversation any further. What nobody realized at that time of course was that his influence has far surpassed the impact his father had. 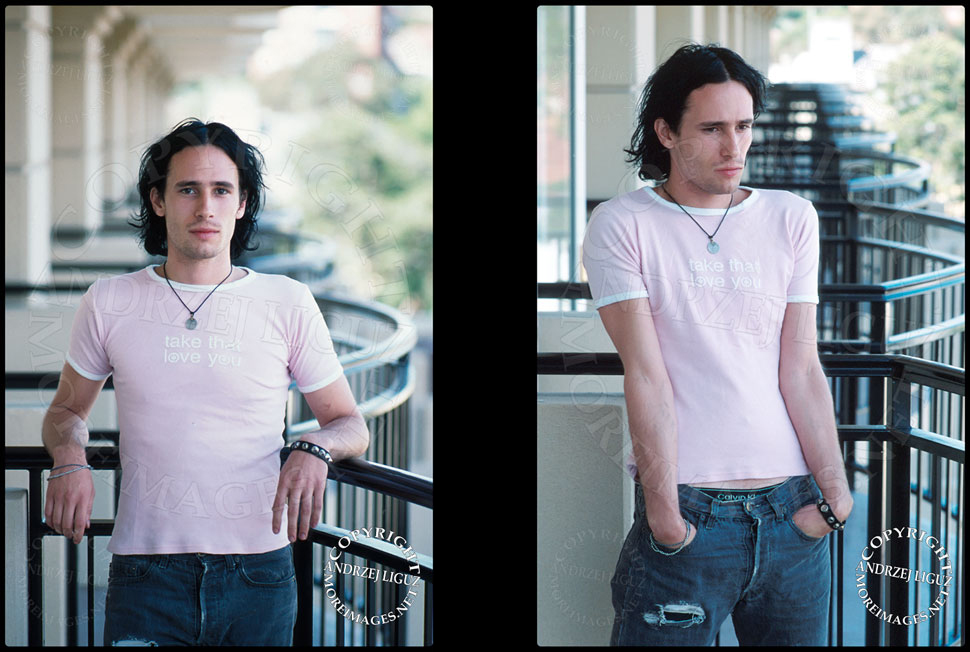 I was surprised to see he was wearing a pink Take That T-shirt as they were not the kind of band I would imagine he’d listen to, but I didn’t comment on it. He’d already done the interview, so we went out on the balcony and I started to shoot some pictures with him.

The brief was to get color pictures to go with the article Who Weekly were going to publish. Magazines always need more than one background / set up as they need a picture to lead with and also a separate image to go within the story, so after shooting on the balcony I also took Jeff back into the hotel room and did some more pictures with him in the hotel room.

Even though I knew the magazine wouldn’t run them, I also decided to shoot some black and white pictures for myself. Which I am now deeply grateful for that foresight as the image at the top of this story came from those pictures.

AND Who Weekly managed to lose all my color pictures when they ran a big story about him after he died. The very cool Stephanie had left by then and I can’t remember the name of the dumb photo editor who’d replaced her, but she had the hide to offer me $500 compensation for the loss of 30 original transparencies. We settled for something above that but less than they were actually worth.

I didn’t hang around after the shoot as Jeff had more interviews to do, but I arranged with Gene to go see the show and shoot some live shots of Jeff at the Phoenician Club when he got back from Melbourne a few days later.

The following Wednesday, on 6th September, I made my way to the Phoenician Club, which was a rundown former cinema turned Maltese bar. Expectant faces that were turned to the stage burst into applause when Jeff and his band walked on.

He opened with ‘Dream Brother’ and played most of the Grace album, only leaving out ‘Corpus Christi Carol’. Highlights were the new song ‘What Will You Say?’ which subsequently appeared on the Live at L’Olympia album in 2001, ‘Vancouver’ which showed up on ‘Sketches…’, a killer cover of ‘Kick Out The Jams’ by the MC5 and a beautiful rendition of Dylan’s ‘If You See Her Say Hello’, which was recorded as part of the Grace sessions but has still not been released (aside from a live version on the Legacy Edition of Live At Sin-é).

One of the pictures from that live show ended up on the cover of ‘Grace Around The World’, the live album that was released in 2009. Jeff’s mother Mary and I started communicating around that time and she also licensed the image to put onto a line of T Shirts which are still being sold on Jeff’s website. 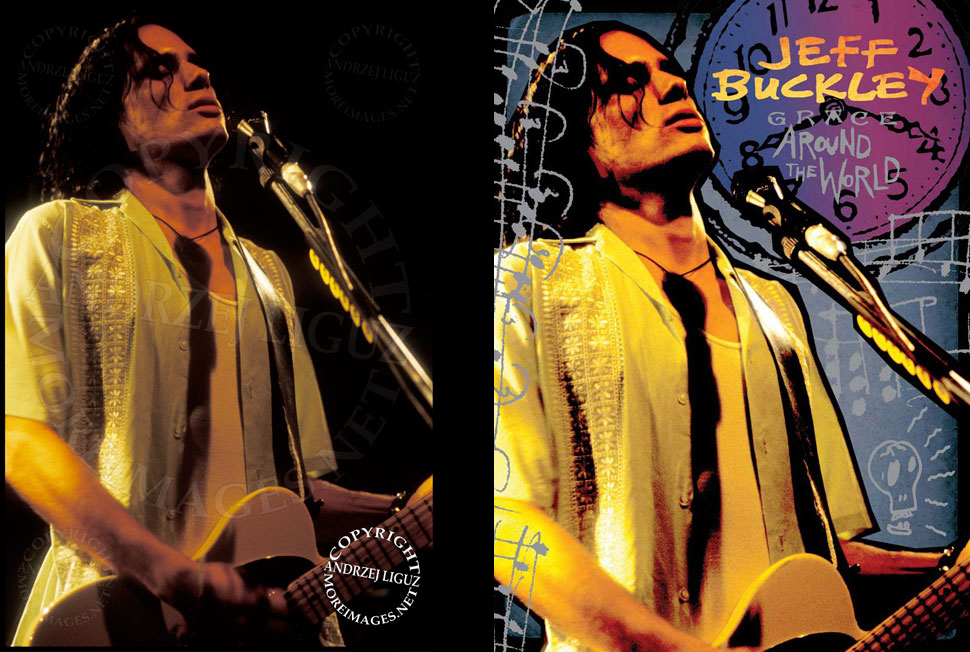 To this day Jeff is still one of my favorite artists and I listen to something by him at least once a week. I’m wrapping up this blog with a video of Jeff performing his awesome cover of Leonard Cohen’s ‘Hallelujah’: