Hurricane Sandy in NYC: A Personal Perspective On The Day It Hit & Day After

Because the City was concerned about the impact of Hurricane Sandy, they stopped the subway running at 7pm on Sunday 28th October. Which was unfortunate from my point of view as I had a big birthday dinner planned for 8pm that same night. But that turned out to be a minor detail in the greater scheme of things. 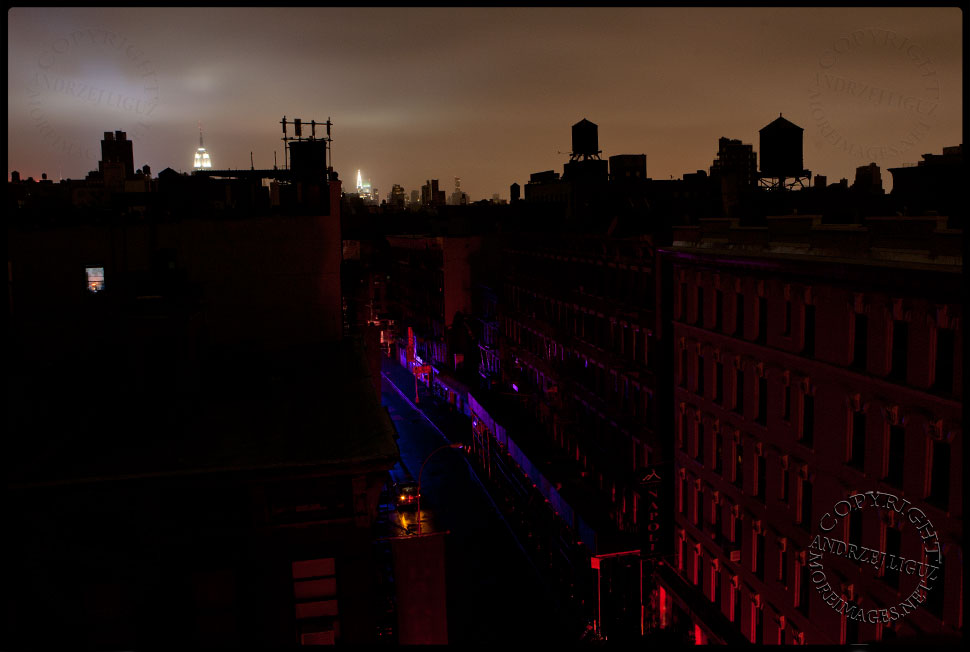 Little Italy, NYC. Hurricane Sandy 10/29/12 © Andrzej Liguz/moreimages.net. Not to be used without permission.

Hurricane Sandy didn’t actually hit until Monday 29th, most of which I spent at home watching the restaurant signs in Little Italy swinging wildly in the wind and waiting for one of them to come loose and fly through the air. But nothing so dramatic happened.

To fill in time whilst I was waiting for something to happen I went shopping for some food and then called my mother and daughter in England to let them know I was ok and not to worry about the news reports as nothing had really happened yet. Late in the afternoon I received a phone call from an automated voice that informed me it was calling on behalf of ConEd and that my power would be shut down sometime later that day. For some reason I didn’t think it was going to actually happen. It all felt a little surreal and a little too normal.

And then around 9pm all the power went off. I subsequently discovered that everyone south of 26th Street on Manhattan was in exactly the same position as me. It was strange to sit in absolute darkness and the only sounds coming from outside were the howling of the wind and the wailing of the sirens. I wasn’t sure whether they were police, ambulance or fire. But they were insistent and they didn’t stop for the rest of the night.

After sitting around the house for half an hour or so I decided to head out into the storm to take some pictures. So I posted a status update on Facebook and climbed the stairs to my roof, where I took the picture at the top of this page.

I could see the lights of the Empire State Building and the Chrysler Building uptown, but there was an enormous gulf of darkness between them and me. The only window with light coming from it was opposite me and it was obvious from the flickering quality it was created by candles. The flashing blue and red lights of the police cars cruising up Mulberry St every few minutes bounced off the walls of the buildings and reflected in the windows of the restaurants.

The wind wasn’t too bad by that point but the occasional seriously strong gust would sweep through and a couple of times I did wonder about the wisdom of going on a rooftop in the midst of a hurricane. Suffice to say I didn’t hang around up there too long. 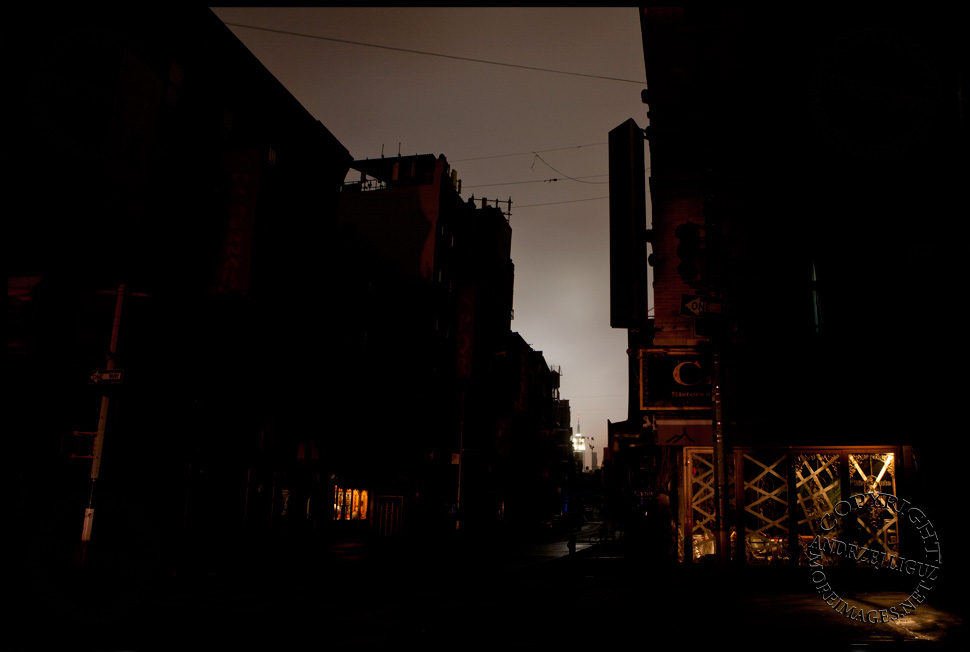 Little Italy, NYC. Hurricane Sandy 10/29/12 © Andrzej Liguz/moreimages.net. Not to be used without permission.

I wandered down to the street level and as the rain was intermittent I set up the tripod for the next picture, looking up Mulberry St with the Empire State Building visible in the distance. The windows in Café Napoli were covered in tape and some lights were on inside so I figured they had a generator running. Another restaurant on the other side of the road had some lights on too, but apart from that all was pitch black.

Police cars would cruise by slowly and I could see them shaking their heads at the mad photographer, but they didn’t pull over to tell me to stop so I figured I could continue with my mission.

I grabbed my bicycle and rode the block to Canal Street which would normally be a riot of cars and lights and noise. Even at 11pm on a Monday evening. It was completely dead. The only vehicles moving were police cars, ambulances and fire trucks. And ConEd trucks. The wind was serious in that long wind tunnel of a road and the rain picked up some pace as well. After shooting for a few minutes and getting soaked I retreated to a doorway where I was at least out of the wind and had some shelter from the rain.

I got cruised by a few police cars, but they could see the camera and the tripod so they didn’t bother me. It was seriously dark and so I shot a lot of the pictures that night on a 30 second exposure. Which is a seriously long time to hope the wind isn’t going to blow over the tripod and camera. Or even move them and destroy the shot. Which happened a few times. 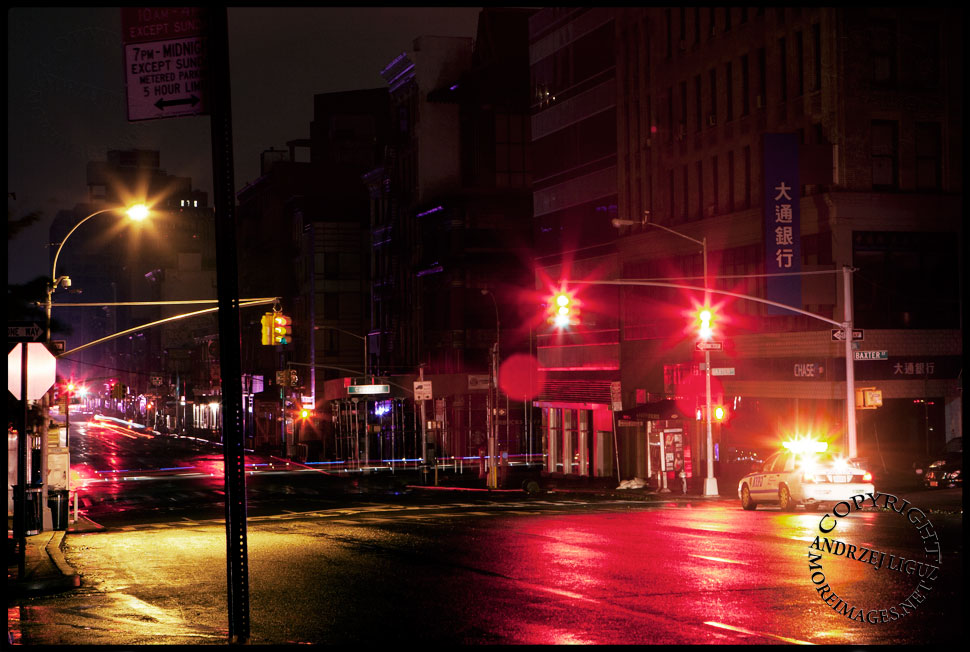 Canal St., NYC. Hurricane Sandy 10/29/12 © Andrzej Liguz/moreimages.net. Not to be used without permission.

I packed away my equipment and rode west in the darkness down Canal St to the Soho Grand on West Broadway, where a good friend of mine Aron (who is the Food & Beverage Director) had invited me to come and visit him earlier in the day.

I was surprised to see sandbags surrounding the entrance and even more surprised to see water in the middle of the street. I made my way past the over efficient (but understandably so) security guard stopping the hoi polloi getting in by showing him the text messages I’d exchanged with Aron. Once I’d touched base with Aron I went back outside and took some photographs of West Broadway, which is where this last image was taken on a very long exposure as a fire truck made it’s presence felt. 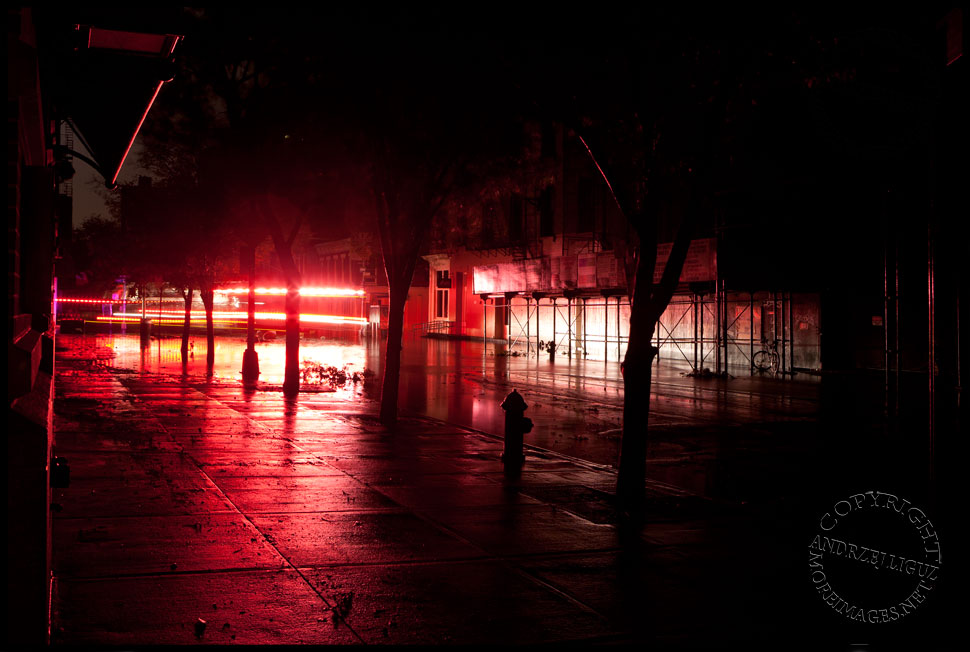 West Broadway, NYC. Hurricane Sandy 10/29/12 © Andrzej Liguz/moreimages.net. Not to be used without permission.

When I got home I discovered that not only was there no power, but also no hot water and no cell phone (or landline) service either. Which has become more of an issue as time has gone by. 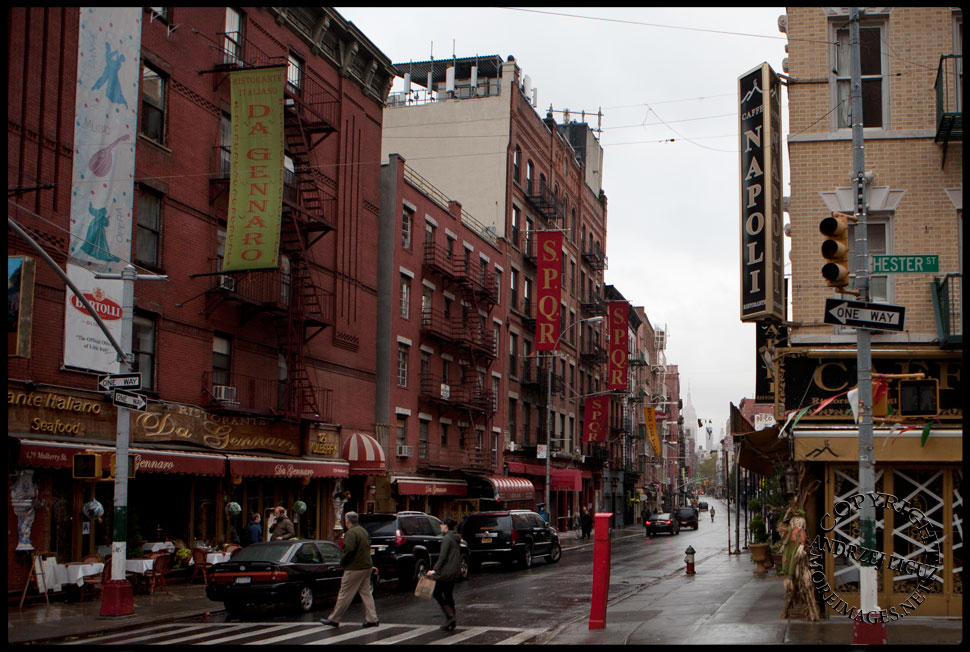 As I couldn’t do any work on my computer I spent most of the following day doing things around the house I’d been putting off for a while and then decided to go back out and shoot some more pictures. 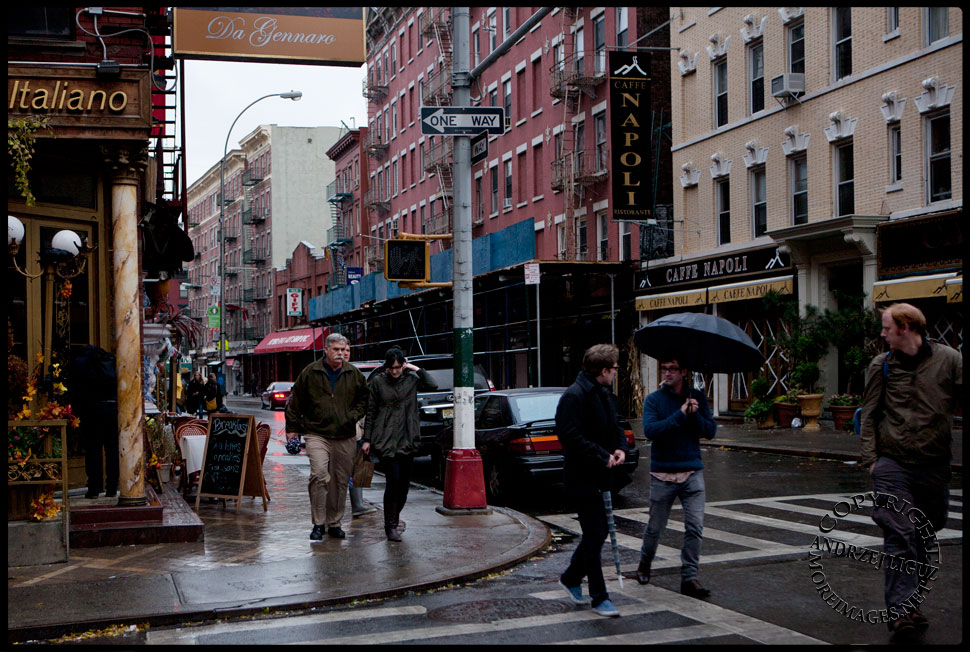 I started in Little Italy again and repeated the shot from the previous evening so I could get a sense of what it looked like in the day. There weren’t many people around so I headed west, where I found this Japanese TV crew doing a quick stand up near the entrance to the closed (and flooded) Holland Tunnel. 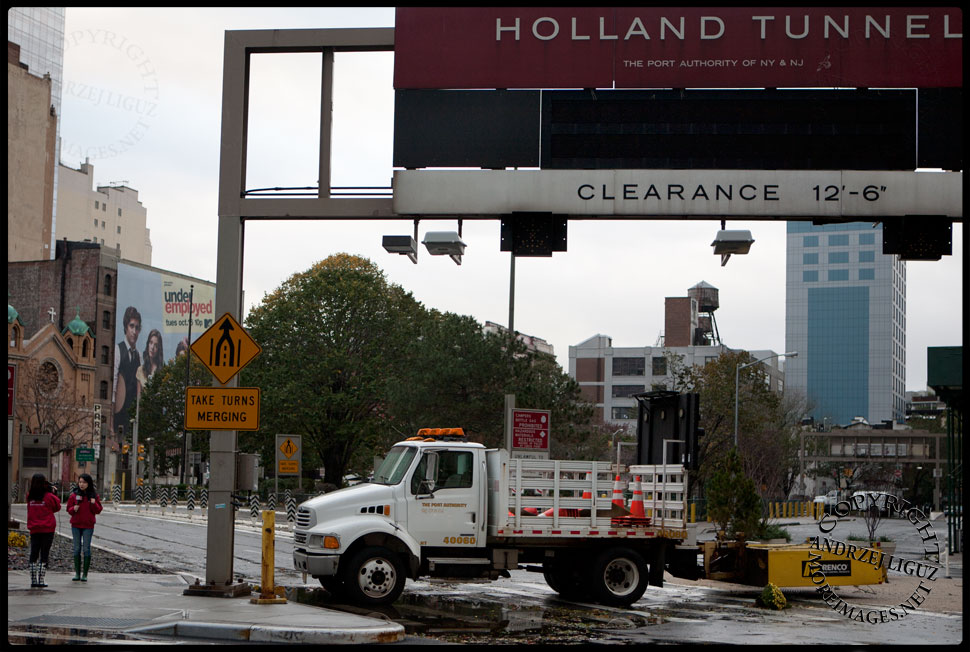 When I got to the Hudson River I shot the pilings with Jersey City in the background and then found a washed up cabinet that was wrapped in plastic. The promenade in front of Battery Park City was full of people out for a walk following the big storm. Further down the promenade Associated Press had set up a tent where their correspondents were sending reports to various countries around the world. 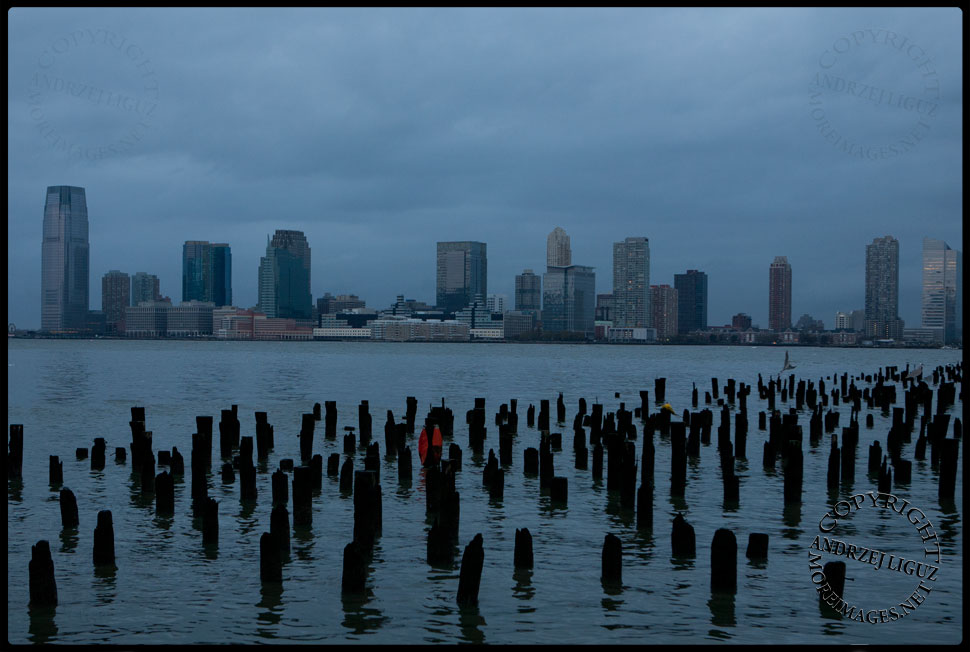 As night was falling I came across a pump siphoning water out of one of basements along the West Side Highway and I was happy to see the ConEd truck rolling past in the background. On my way home I stopped in at the Soho Grand and met Aron wandering around outside. He was about to go hunting for large plastic cups as they weren’t using glass because of the dim lighting created by the generator in the hotel and so I offered to go look for them on my bicycle as it would be quicker and easier for me to do so. 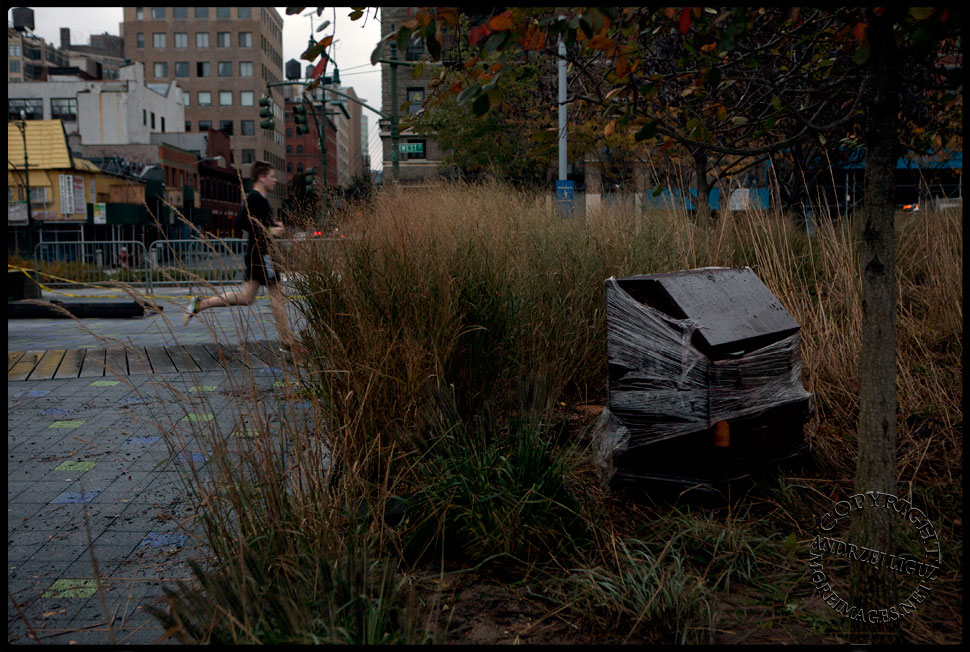 Washed up cabinet next to the Hudson River, NYC. Hurricane Sandy +1 10/30/12 © Andrzej Liguz/moreimages.net. Not to be used without permission.

He took my camera bag and I set off uptown on my mission. It was strange to ride into the part of the city where there is power and people were thronging the sidewalks. I went to approximately 11 or 12 different Duane Reade’s only to discover the shelves had been stripped of plastic glasses. I finally discovered a D’Agostino’s that had just had closed but I sneaked in through the out door and was delighted to find 7 bags of 20 16oz plastic glasses, which I immediately grabbed and paid for. 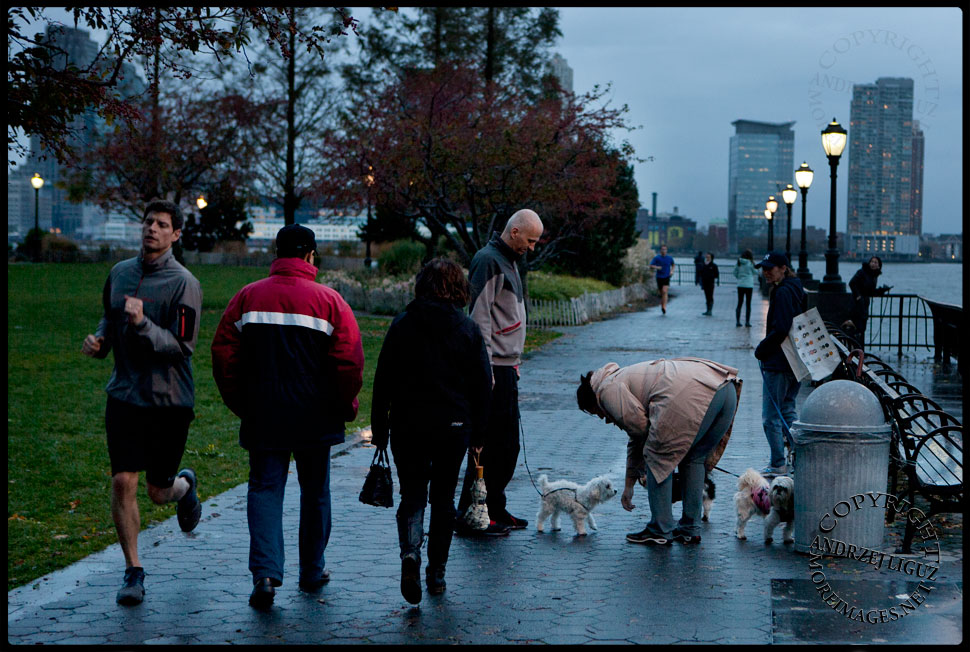 The ride back downtown had a definite surreal quality to it when I crossed the line from light back into darkness. I was in the midst of the Manhattan madness (aka civilization) and then all of a sudden I was riding in absolute pitch blackness and silence. I wished I had my camera but at the same time was grateful I’d left it behind as my journey was lighter and faster without it. 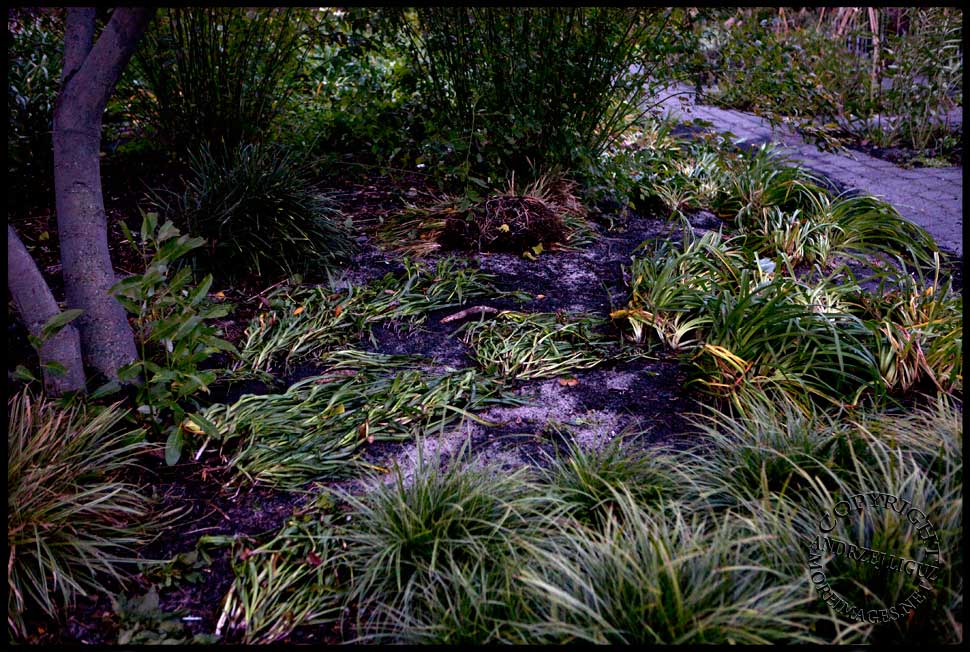 Two hours after I left thinking I’d be back in 30 minutes I returned to the Soho Grand where I was greeted like a conquering hero and I collapsed in a chair where I sat for the next few hours sorting through pictures and replying to emails I’d missed through lack of net and power. I have to very clearly state here and now that I am extremely grateful to Aron and all the staff at Soho Grand for looking after me so well. They are true heroes, working hard under very tough conditions and doing it extraordinarily well. If it wasn’t for them I would be struggling to find somewhere where I can charge up my equipment and work on my computer. If you are coming to visit NYC then I would highly recommend staying here. Or if you are coming next year, then try the sister hotel, Tribeca Grand, because Aron will be GM of that hotel next year. Respect and kudos to that fine and dapper gentleman. 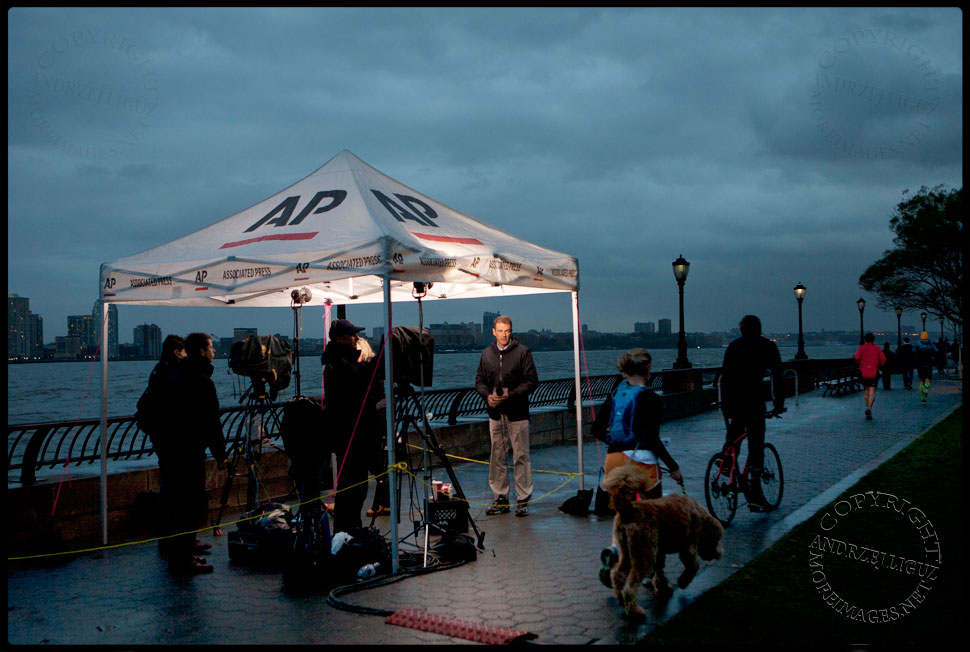 I went back out today and shot some more pictures, this time in the East Village which was hit badly by the Hurricane. I’ll post those tomorrow as it’s now seriously late and I’m exhausted and want post this before I head home to my dark and cold apartment. I wish I could take a long hot shower, but no such luxury yet. And it doesn’t look like that will be happening until early next week. If then. This Hurricane Sandy caused some serious problems and there are well over a million people in downtown Manhattan who are currently without power or hot water. Spare a thought for them today when you step in your shower and turn on your light. Or even as you read this on your computer. Enjoy it while you can. It could be gone tomorrow. 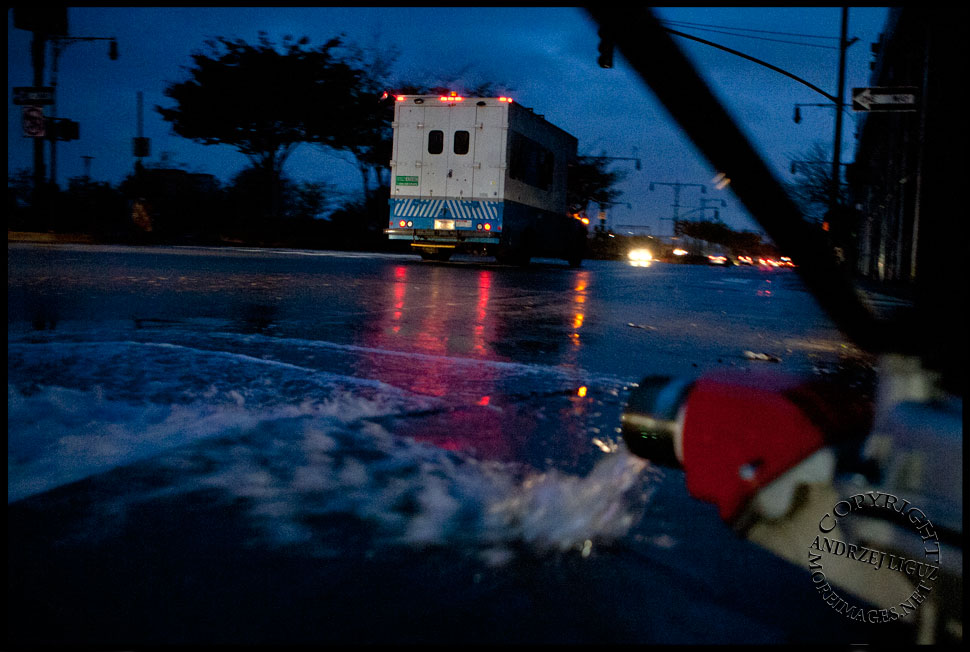 Water pumping, West Side Highway, NYC. Hurricane Sandy +1 10/30/12 © Andrzej Liguz/moreimages.net. Not to be used without permission.