Fela Kuti: The Man, The Music, The Legend, The Fela! Broadway Musical

Nigerian musician Fela Kuti could be described as a militant version of Bob Marley. Following the 1977 release of his ‘Zombie’ album, over 1,000 soldiers attacked his Lagos compound and beat him, his band and his entourage with iron bars. They sexually assaulted his wives and threw his mother from a second floor window. She died as a result of her injuries. 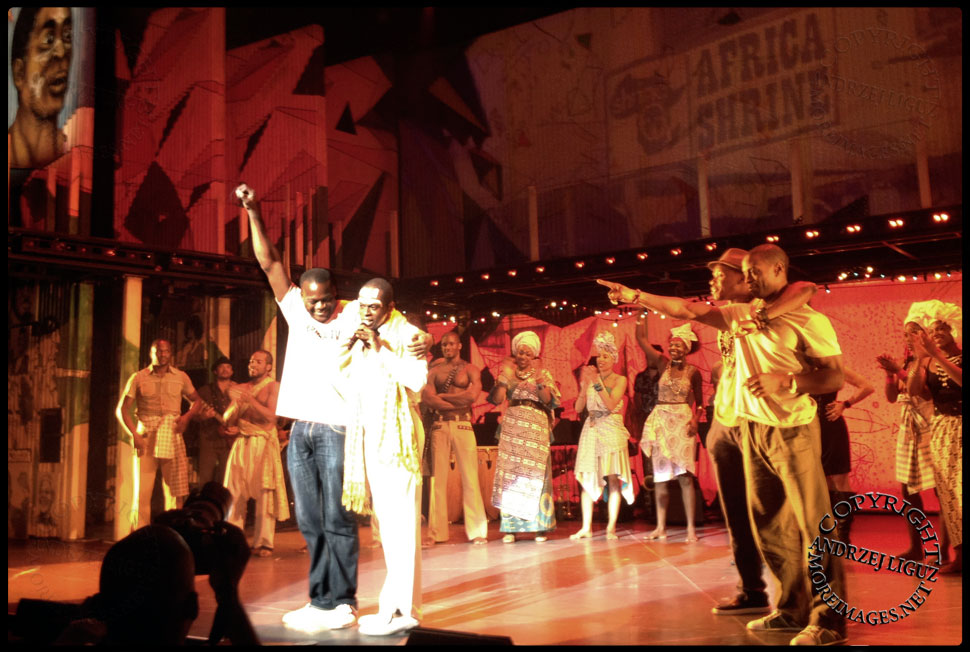 Sahr Ngaujah and Ogugua Iwelu at the end of the Fela! show. Shot on iPhone 4S © Andrzej Liguz/moreimages.net. Not to be used without permission

Fela was arrested and jailed more than sixty times by the Military dictatorship of Nigeria during the 1970’s. His powerfully incendiary songs enraged those in power and he was a serious thorn in the side of the government as he had massive support from the common people. Fela started his own political party, MOP (Movement Of The People) and attempted to run for President of Nigeria in 1979, but his candidature was refused.

As well as being seriously political, Fela also invented Afrobeat, a polyrhythmic fusion of Jazz, Funk, West African High-Life, Psychedelic Rock and traditional West African chants and rhythms. A combination guaranteed to make you dance, as can be seen in this video shot by Cream drummer Ginger Baker in 1971:

Fela was a legend. Such a legend that now there is a Broadway musical about him, financed by Jay-Z, Will Smith and ?uestlove from The Roots amongst other more traditional Broadway backers. And it’s not some hackneyed light piece of froth, but a real journey through the life and times of the man, as well as the legend. And all performed within a very cool set by a kick ass cast of dancers and singers, with a killer band. 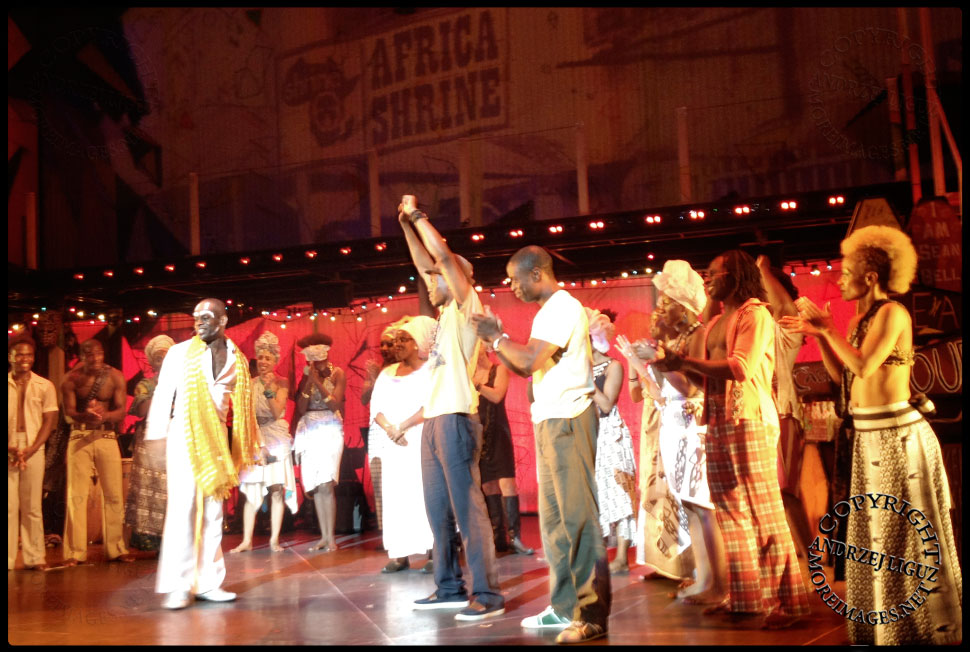 Sahr Ngaujah and the cast of Fela! at the end of the Fela! musical. Shot on iPhone 4S © Andrzej Liguz/moreimages.net. Not to be used without permission

I saw Fela! a couple of weeks ago and felt privileged to witness Sahr Ngaujah’s last performance after seven years in the title role. It was an incredible show and the end was particularly emotional for the cast and crew as he handed on the role to the more than capable hands of Duain Richmond.

The after party was amazing with ?uestlove spinning the decks and the dancers from Fela! cutting up the dancefloor with amazing moves. Ever been to a party with professional dancers? Those people know how to move and they just don’t stop. One of the best nights I’ve had for a long time. 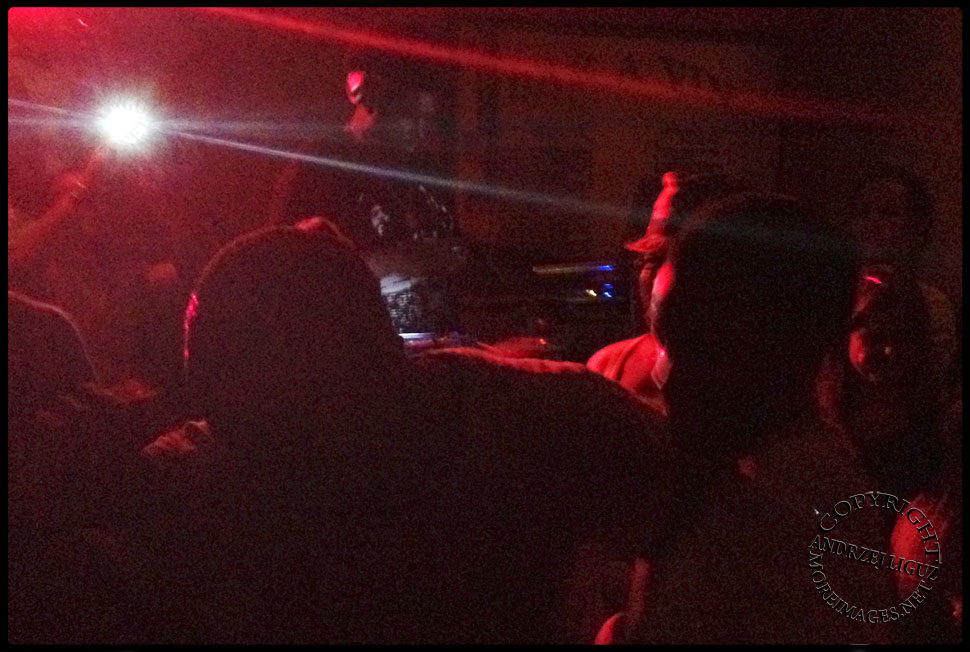 ?uestlove on the decks at the After-Party following the Fela! show. Shot on iPhone 4S © Andrzej Liguz/moreimages.net. Not to be used without permission

I first heard of Fela in 1979 when ‘Black President’ came out. The NME gave it a great review and my friend Nick bought the album. It was a compilation of three vocal tracks from African releases; ‘Sorrow Tears And Blood’ (1977), ‘Colonial Mentality’ (1977) and ITT (International Thief Thief) (1979). We’d never heard anything like it. Well, maybe Gil Scott-Heron and The Last Poets. But with phenomenal mad grooves and sung in Pidgin English, so that more Africans could understand it.

I finally got the opportunity to see Fela live in 1983 at what is now the Brixton Academy in London.  To this day it is still one of the strangest gigs I’ve ever been to. He had a Witch Doctor on stage with him who took absolutely no notice whatsoever of the fact there was an amazing band playing an incredible show all around him. He asked for a volunteer from the audience to give his shirt and then cut it into pieces with a big pair of scissors. As I recall, he balled up the shirt and then when he pulled it open, the shirt was in one piece again. And looked like it had been ironed. He followed that up by cutting out his tongue and coming right to the front of the stage so the audience could see the stump of the tongue in his mouth. He then put the tongue back into his mouth and showed us his mouth again we could see it was all back in one piece. It was mighty strange.

Ogugua Iwelu lived in Kalakuta Republic, Fela’s compound in a poor neighborhood of Lagos and I met Ogugua at the Fela! show a couple of weeks ago as he is one of the Producers. I mentioned that I saw Fela thirty years ago and asked him about the Witch Doctor. He told me the Witch Doctor was responsible for Fela being arrested in 1984 on currency smuggling charges. The Witch Doctor illegally brought money back into Nigeria at the end of the tour and when he was stopped, Fela took responsibility and told the officials it was his money. Fela did twenty months in jail for that episode and Amnesty International took up his cause to get him released.

After his release he formed a new band, Egypt 80 and continued to make politically charged records and tour the world until his death by an Aids related illness in 1997. The documentary ‘Music Is The Weapon’ was made about him in 1982:

There has been a revival of interest over the last few years in Fela and his legacy led principally by the musical Fela! Knitting Factory records re-released 48 of his albums in 2009 and they can be found on his website. A good place for someone who’s never heard his music to start would probably be the compilation album, Best Of The Black President.

If you live in NYC, make a point of going to see Fela! at the Al Hirschfield theatre on 45th and 8th Ave.. It finishes at the end of this week on 4th August. And if you know me, get in touch as I have a promotional code which I can give you so your tickets will be discounted. 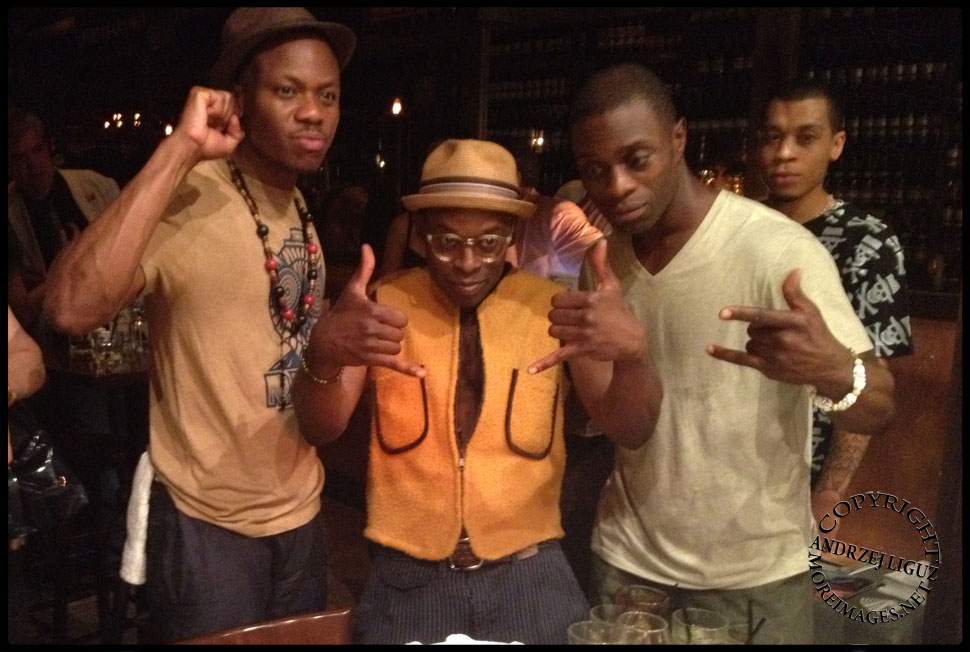 Sahr Ngaujah and fellow performers after the Fela! show. Shot on iPhone 4S © Andrzej Liguz/moreimages.net. Not to be used without permission