Justin Ross Lee is a Socialite and Reality TV Star

My phone rang one afternoon a few weeks ago and the voice on the other end introduced itself as Justin Ross Lee. I’d just been booked to do a shoot with him by the NY Times and he’d called to confirm the details. When I asked what he does, he informed me he is a socialite and reality TV star. 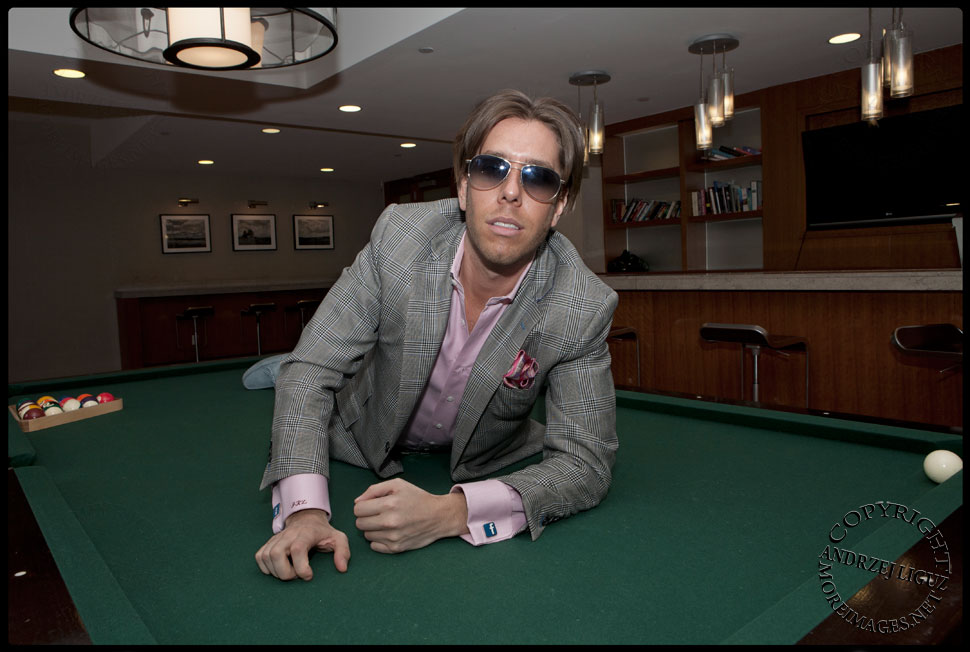 Justin Ross Lee on the pool table © Andrzej Liguz /New York Times Not to be reproduced without permission.

I’ve met a lot of people in the course of my life and I’ve never met anyone who introduced himself in that way. I figured he was going to be an interesting character. And I was right. And he didn’t tell the entire truth when I asked him what he does. He also has a company producing and promoting pocket handkerchiefs called Pretentious Pockets, as well as an endorsement deal with Lugless, a company that ships luggage for travellers. 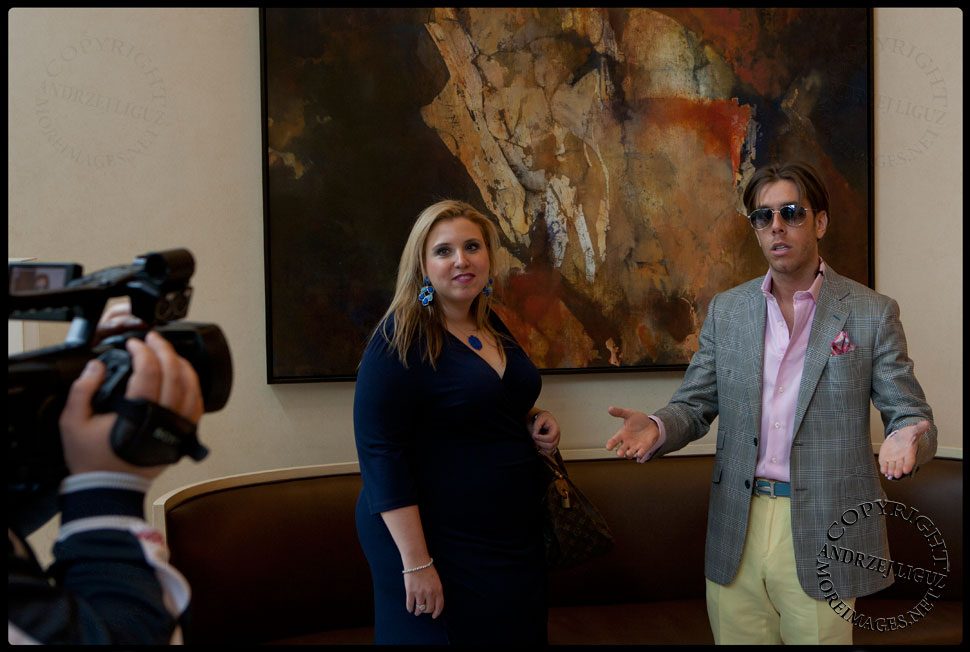 I showed up at the apartment building on 34th St just as a film crew walked in with Haute PR owner and reality TV star Robin Kassner. She appeared on Millionaire Matchmaker and is now putting her own show together. As she represents Justin, she had come with her crew to film me doing the photo shoot with Justin for the NY Times. When I discovered this I pointed out that even though I am a freelancer, on this occasion I was working for the Times and needed to check in with them to see what they had to say before I could agree to it. So I called Beth, the photo editor who’d commissioned me to do the shoot and she told me they wouldn’t be allowed to film as they hadn’t cleared it in advance and couldn’t simply do a guerilla run on the NY Times like that.

As the crew was already there and I was in no hurry, I suggested Robin do a quick interview with Justin so their time wasn’t entirely wasted. I photographed Robin chatting with Justin in the lobby before we went up to the meeting room where I shot some portraits of Justin. He was a willing subject and was happy to lie on the pool table when I suggested it could make for an interesting image. 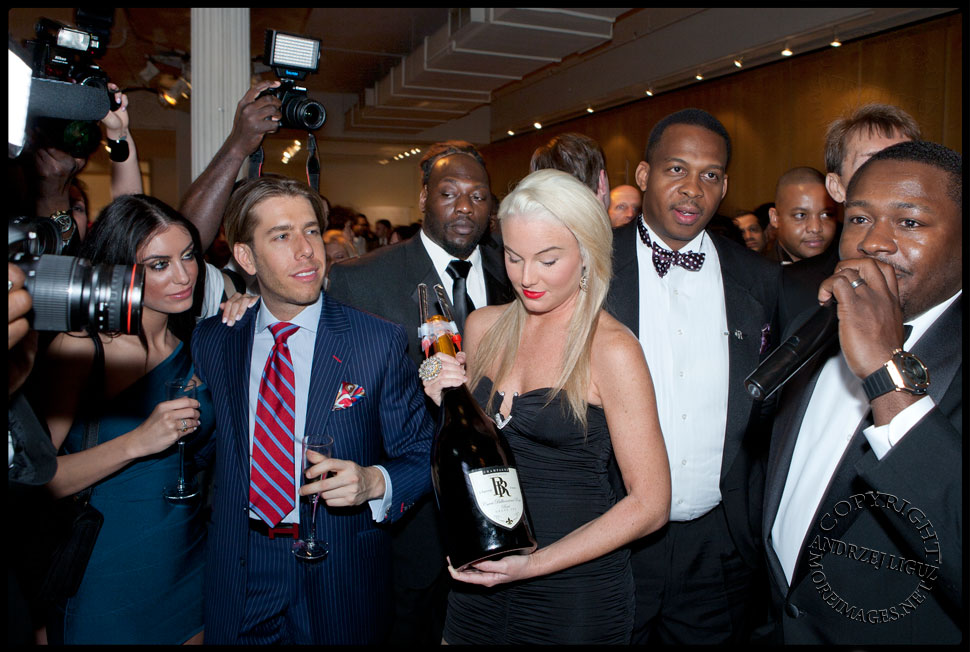 I got another phone call a couple of weeks ago, but this time from Beth at the NY Times. She told me that Justin was attending The Luxury Review and the Times had decided they also wanted some pictures of Justin in situ. So on the appointed day I showed up at The Metropolitan Pavilion ready to go. As always, he was accompanied by Adam Amsilem and Jonathan Hadi, his two interns and his attorney, Mark J Friedman.

Bradford Rand from Rand Luxury was finalizing details for his event at the door as we came in and he greeted Justin like a long lost friend, as did Patrick McMullen, the well known party photographer around NYC. The brief from Beth had been to shoot reportage style images of Justin as he wandered and checked out the various toys that were on display. Unfortunately the lighting was too dim for me to be able to do that, so I ended up shooting more party style pictures, which she was really happy with anyway.

Justin Ross Lee with friends at The Luxury Review © Andrzej Liguz /New York Times Not to be reproduced without permission.

The event was for people with serious money to spend. We saw the launch of the new Bentley Continental GTC and a new Limited Edition Ducati 1199 Panicale motorbike as well as the Cuvee Billionaires Row Brut Rose Champagne. There were stands promoting golf courses and jewellers, luxury yachts and jet planes, wines and Leica cameras. And chocolates. Which were superb.

Justin and his entourage spent the full 4 hours having fun at the Luxury review, catching up with old friends and new as well as trying out the Bentley for size and checking out the new Billionaires Row champagne and Alacran tequila, which is owned by his friend Arty Dozortsev.

He chatted for a while with NY Giants Superbowl player Hakeem Nicks and I captured as much of it as I could until we finally got kicked out by the security and moved on to MPD restaurant in the Meatpacking district. I photographed him having dinner with his friends before I finally made it home around midnight.

Justin Ross Lee with girlfriend Regina Brawer at The Luxury review © Andrzej Liguz /New York Times Not to be reproduced without permission.

Beth had told me the deadline for the pictures was noon the following day. As I’d shot 650 pictures, which was really far too many but I wanted to make sure I had it really well covered as I’d had to shift on the original brief, I ended up staying awake all night processing and editing the pictures so I could deliver them on time. I dropped 25 images on the NY Times ftp site at 11.30am and Beth was delighted with the results. And I went to sleep. The story ran in the NY Times last Thursday and is worth checking out as it’s a good profile of an interesting character who could only really survive and prosper in NYC.

Justin Ross Lee & girlfriend Regina Brawer at MPD in the Meatpacking District © Andrzej Liguz /New York Times Not to be reproduced without permission.

I recently created a new Facebook page for my photography and will be posting more pictures from these shoots into a gallery there, so ‘Like‘ the page and come back and check for that later or tomorrow.