Paul Kelly in NYC: S To Z Wrapped It All Up On The Fourth Night

On the last night of his four A to Z shows in NYC, Paul Kelly walked on the stage of a sold out Rockwood Music Hall which was filled with anticipation after hearing stories of the first three nights. It was going to be a great night and nobody would be going home disappointed. 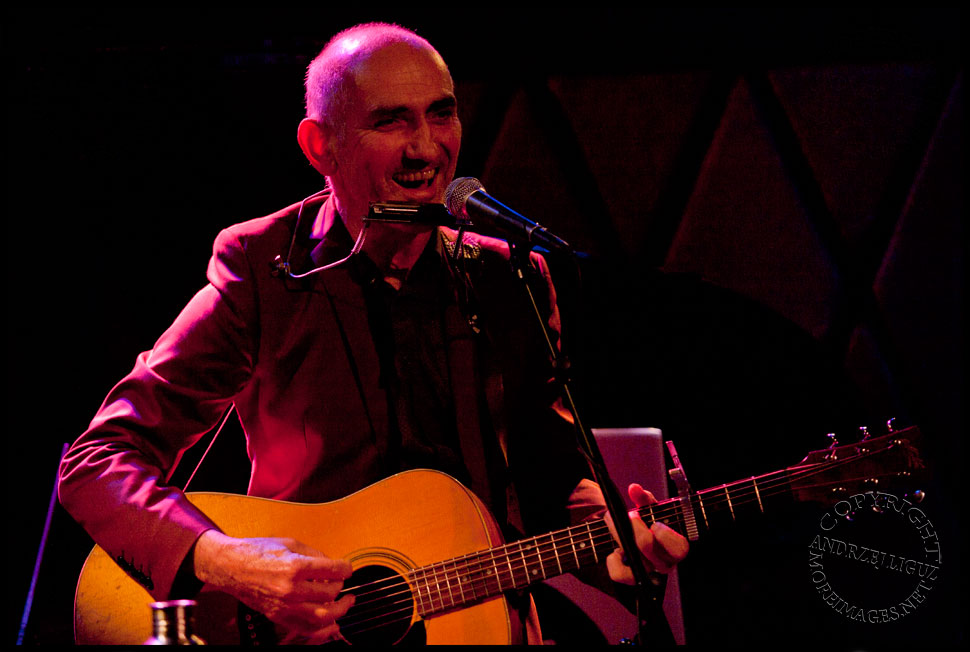 Looking up briefly after adjusting his harmonica, he launched into the classic drunken regrets wrapped up in a stark and stripped down version of ‘Stories Of Me’:

He checked his capo and moved it into the proper position for the meditative ‘She’s A Melody (Stupid Song)’ before smiling for the first of many times that night as he introduced Dan and told us “When Henry Miller left Brooklyn for Paris sometime in the 1930’s, he said “Goodbye streets of early sorrows, goodbye pastrami on rye”. A woman called Julie is the star of this song. She is now about 57, but is always 17 in this song”. They then played the haunting ‘Standing On The Streets Of Early Sorrows’ and Dan’s guitar scattered beautiful notes around the room. I’m not sure if I’ve said this yet, but Dan is the perfect foil for his uncle and more than justifies his airfare and lodging night after night after night.

‘Stolen Apples’ taste the sweetest, especially with that brutal guitar sound from Dan and ‘Stumbling Block’ was a history of philosophy in 3 1/2 minutes with some classic lines: “if you can’t get rid of what’s inside you, it’ll destroy you”. ‘Sydney From a 747’ is an at Antipodean interpretation of ‘Dallas’, a Jimmie Dale Rogers song first recorded by The Flatlanders in 1972 which asks “Did you ever see Dallas from a DC-9 at night?”

‘Sweet Guy’ was the first song Paul wrote from a female perspective which he told us felt weird at first, but he got used to it after the first two or three times he played it. The beginning of the seriously sad ‘They Thought I Was Asleep’ was reminiscent of ‘The Boxer’ by Simon & Garfunkel but went on to sketch the story of a boy driving in the back of a car as his parents drive home after a day in the country and he watches some kind of discussion between his parents that end with his mother crying and his father stroking her face.

The Mistake by James Fenton was the starting point for ‘Thoughts In The Middle Of The Night’ and whilst we were on the subject of books, we discovered that Paul is currently buried in Christopher Hitchens biography, which he thinks is a great read. He asked Tour Manager Greg to turn up the guitars so ‘To Be Good Takes A Long Time (To Be Bad Takes No Time At All)‘ could be made into more of a Rock’n’Roll song.

Dan broke out his best surf guitar sounds for the awesome ‘To Her Door‘, which brought loud cheers of recognition as it’s now regarded as one of the all time classic Aussie songs. A blistering ‘Under The Sun’ completed the first half of the last night.

After a half hour break Paul came out with Dan for their second ukulele song, ‘Until Death Do Them Part’. This wedding song was originally written for a play but since then he’s actually played it at weddings and sometimes even as the bridal waltz. Dan got a loud response from the crowd for his ukulele solo.

Paul told us he doesn’t have a V song, so Dan did a ‘Vision’ of the future by performing the extremely surreal ‘Bindi Irwin Apocalypse Jam’ from his ‘Dan Kelly’s Dream’ album. Stolen from Ringo’s ‘Octopuses Garden’, this psychedelic romp through an imaginary underwater future with Bindi Irwin (who’s mother was always there as chaperone) got the audience singing acapella and cheering his incendiary guitar work.

‘When I First Met Your Ma’ is still one of my all time favorite songs, as is the mighty ‘Wintercoat’, which is covered to great effect by the Dresden Dolls, but on this evenings showing felt like Chris Isaacs should be covering it.

As there are no songs starting with X, Paul gave us something X rated: The opening verse of the mighty ‘Right Outta My Head’ featured the following perspective:

After this firestorm of sound, Dan left the stage and Paul returned to the piano where the always stunning ‘(You Can Put Your) Shoes Under My Bed’ drew intimacy and yearning back into the picture. And the spastic line always raises a laugh.

‘You Can’t Take It With You’ is a finely tuned observation that irrespective of whatever it is we have, whether fame, fortune or lofty ideals, we can’t take any of them with us when we die. There are definitely times when Paul could almost be described as Old Testament in his perspective on the human condition.

The poignant ‘You Broke A Beautiful Thing’ was originally written for Renee Geyer and the raucous ‘Your Little Sister (Is A Big Girl Now)’ was conceived as a companion piece to the classic ‘Little Sister’ by Doc Pomus.

‘You’re 39, You’re Beautiful And You’re Mine’ was inspired by ‘You’re Sixteen’ which was initially recorded by rockabilly singer Johnny Burnette in 1960 and turned into a #1 hit by Ringo Starr in 1974. Paul’s version was written for his girlfriend Sian Prior, but in one of those ironies of life, she’d turned 40 by the time he finished it.

The final song of the show was ‘Zoe’, which Paul informed us means life in Greek. The opening guitar line from Dan sounded suspiciously like the opening to ‘Rikki Don’t Lose That Number’ by Steely Dan and his backing vocals could have come from an Empire Of The Sun song.

Paul and Dan left the stage and the crowd didn’t stop clapping or hollering until Paul returned a couple of minutes later. There were loud shouts for ‘How To Make Gravy’, but he’d played that a couple of days earlier and wasn’t going to do it again. Instead he treated us to another song he’d written for Renee Geyer but hadn’t actually himself played before, the sublime ‘When A Woman Loves A Man’.

Dan reappeared for the clap along of ‘You’re So Fine’ and laid down some superb Dick Dale styled guitar for ‘Young Lovers’ before they both disappeared again. The crowd was so loud they finally came back to wrap the up their series of NYC A to Z shows with the Dylanesque ‘Your Lovin’ Is On My Mind’ and a delicate ‘Summer Rain’.

Smiling broadly Paul and Dan finally left the stage ready to head out for their next show. I cannot recommend that you go and see the A to Z shows highly enough if they come to a town close to you. Paul Kelly is a genius songwriter and one of the warmest performers I have seen with a wicked larrikin sense of humour. If you can’t get to see one of these shows, then get the A-Z Boxset from his website, as it’s the next best thing. This video of the much requested ‘How To Make Gravy‘ gives a great perspective on Paul and how his music connects with an audience. 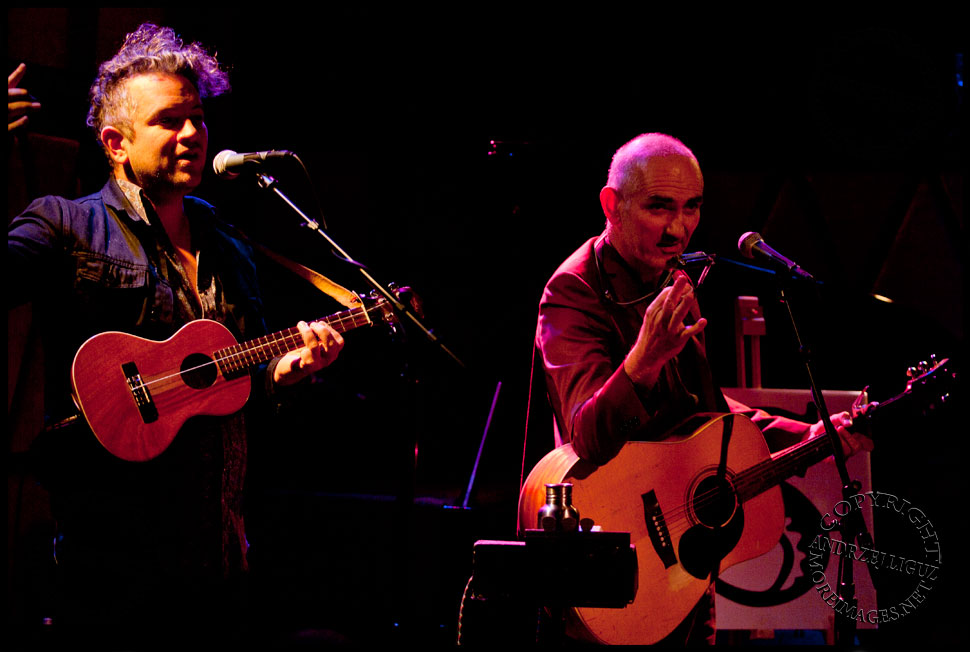 Paul & Dan Kelly say goodnight at Rockwood © Andrzej Liguz/moreimages.net. Not to be used without permission