Paul Kelly in NYC: F To L Is Stop Two Of The Journey.

Last night was the second of Paul Kelly’s intimate A-Z shows at the 300 capacity Rockwood Music Hall Stage 2. Much of the audience were obviously settling in for the whole week as they’d been there on Tuesday night and their shared love of this Australian wordsmith began to make them feel like old friends. 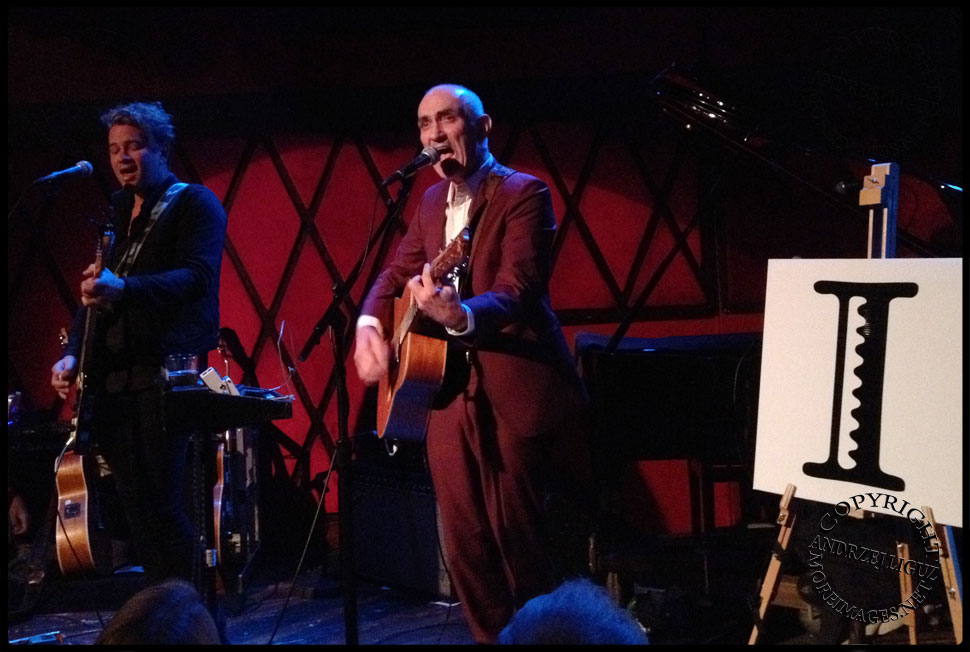 As he’d covered A to E last night, he opened with ‘Foggy Highway’ to appreciative applause and then moved straight onto ‘Foggy Fields Of France’, which was based on a poem by e.e. cummings.

We discovered at this show that ‘Forty Miles To Saturday Night’ was inspired by a painting called ‘Ten Miles To Saturday Night’ that Paul saw whilst on tour in San Diego. As can be seen here, this painting by Canadian painter Robert Lougheed features 3 well dressed guys on horseback heading into town and one of them is obviously a musician as he’s carrying a violin case. 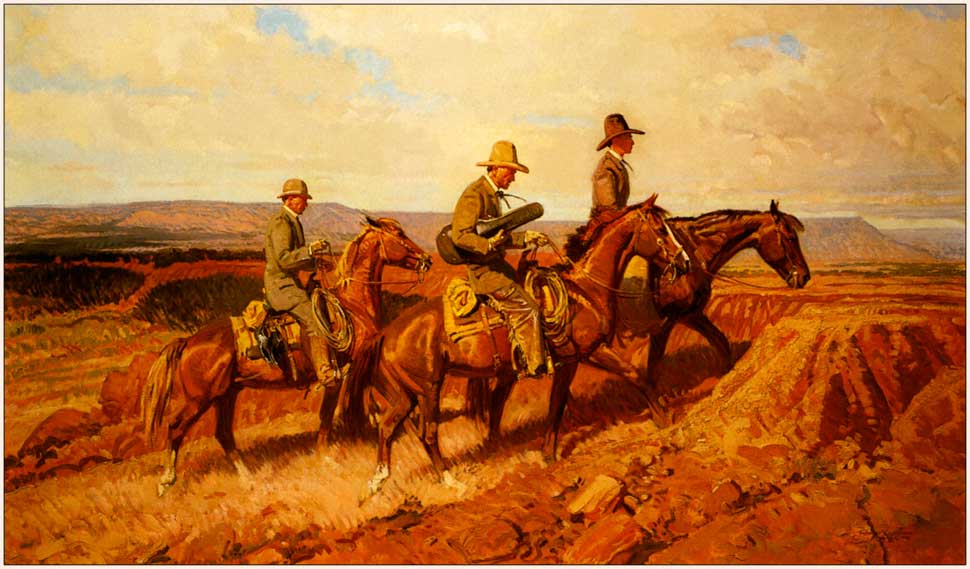 I was delighted to hear ‘From Little Things Big Things Grow’ next as it’s one of my personal favorites and an important song in the pantheon of Australian music as it unambiguously tells the story of how Vincent Lingiari and the Gurundji people led the way to Aboriginal Land Rights with the 9 year Gurundji Strike / Wave Hill Walk Off in August 1966.

I wasn’t aware the trigger for the title came from a Bruce Springsteen rock’n’roll song called ‘From Small Things (Big Things One Day Come)’, that was given to Dave Edmunds in 1982 for his D.E. 7th album.

Paul co-wrote this superb protest song with the phenomenal Aboriginal singer–songwriter Kev Carmody, with whom I became friends with back in 1989 just after his incredible first album ‘Pillars Of Society’ came out that featured the genius of ‘Comrade Jesus Christ’ and ‘Thou Shalt Not Steal‘. Full disclosure – I photographed Kev for his 1995 album ‘Images and Illusions’. 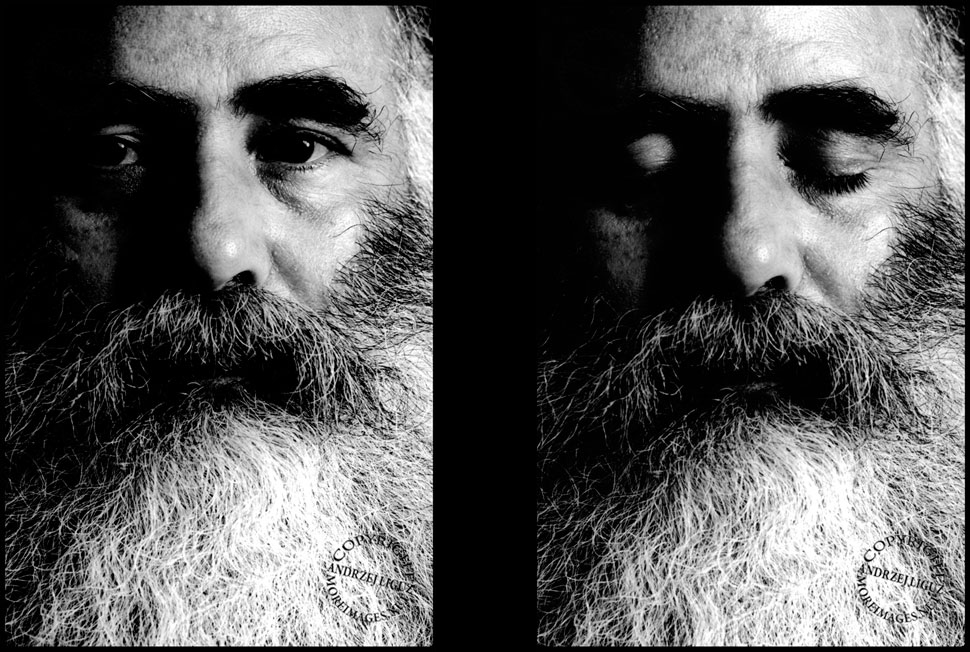 Kev Carmody © Andrzej Liguz/moreimages.net. Not to be used without permission

Rolling Stone described the performance of ‘From Little Things Big Things Grow’ by Paul Kelly, Kev Carmody, John Butler and Missy Higgins as one of the highlights of the Australian leg of ‘Live Earth’ in July 2007, with the emotional audience singing along to all eleven verses.

From St Kilda To Kings Cross brought cheers and smiles to many of the ex-pat Australians in the audience as it’s an old favorite which covers the long standing conflict between Sydney and Melbourne as to which is the better place to live and settles firmly on the side of Melbourne.

Dan left the stage for ‘Gathering Storm’ and ‘Ghost Town’ but returned for the sublime ‘(The) Gift That Keeps On Giving’ that featured beautiful harmonies as Paul and Dan sang together. Paul informed us it was based on one of the greatest love poems ever written, ‘The Song Of Songs’ by King Solomon, but that the original was far too long to use in a pop song.

“Something about G makes us look in the Bible” was the introduction to the next segment of the show. ‘Going About My Fathers Business’ was an amazing song about the way we repeat the sins of our parents that featured one of those classic Paul Kelly couplets which say everything in so few words:

“Going about my father’s business, doing my father’s time
What’s done to me, I’ll do to mine”

‘God Told Me To’ is a deeply disturbing psycho murder song that Nick Cave would have been proud to write. It featured a serrated guitar from Dan Kelly that slashed the air like a rusty knife cutting a throat and spilling blood on the killing floor.

‘Hard Love’ was written for Vika and Linda Bull. These half Tongan sisters have performed with Paul on and off for many years and have been the beneficiaries of his songwriting talents on more than one occasion. He loves writing songs for them because as he pointed out before the song, there is a special quality to the sound created when siblings sing together. The same could be said for the empathy he shares with his nephew Dan, who has accompanied him on the A-Z tours for many years.

Paul apologized as he told us ‘How To Make Gravy’ is a Christmas song that doesn’t have a chorus. But I did notice that doesn’t stop people from singing along to this sadly sweet story of a man writing to his brother just before Christmas that name checks the awesome Junior Murvin who wrote the superb ‘Police & Thieves’. 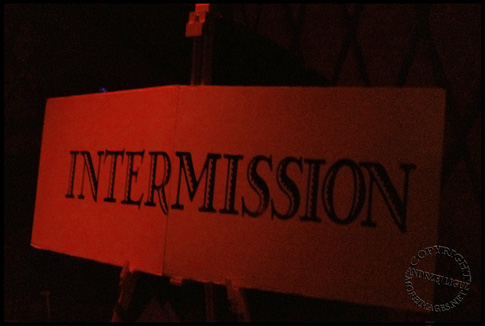 The Intermission Sign © Andrzej Liguz/moreimages.net. Not to be used without permission

The twenty minute intermission gave everyone time to replenish their drinks and relieve the pressure on their bladders. The line was so long for the bathroom I didn’t bother waiting and went next door instead.

Another old favorite of mine, ‘I Can’t Believe We Were Married’ opened proceedings on the second half of the show with Dan singing harmonies but not playing guitar. This is one of the best songs I’ve ever heard about a former relationship, which features that subtle sense of humor at which Paul excels.

“Our houses were a shambles, our love conspiracy
Your hand was always down my pants
before our guests could leave
They didn’t like our drugs, our children or our dogs
The way we made it up each day
Now the kids have grown, we talk on the phone
If one of them is sick or needs some money
Our words are dry, so measured and polite
I can’t believe we were married
That we were wed”

‘I’d Rather Go Blind’ is most definitely not the Etta James song, but carries a similar sentiment. ‘If I Could Start Today Again’ traces the sadness and regret of words said in anger and ‘I Wasted Time’ was a stunning song about the realizations which curl around the edges as we come to terms with growing old.

As Paul sat behind the piano for ‘I Was Hoping You’d Say That’ he told us he didn’t want to waste the piano. But then he wryly noted that given the quality of his piano playing he was probably going to waste it anyway. It was a suitably humorous introduction to this sweet love song that makes everyone laugh.

‘I Had Forgotten You’ hadn’t been played for a long time and was being aired tonight on Dan’s suggestion. The audience appreciated hearing this chestnut from ‘So Much Water, So Close To Home’. Dan left the stage for the stark and serious ‘Just About To Break’, which for me was one of the highlights of the night. 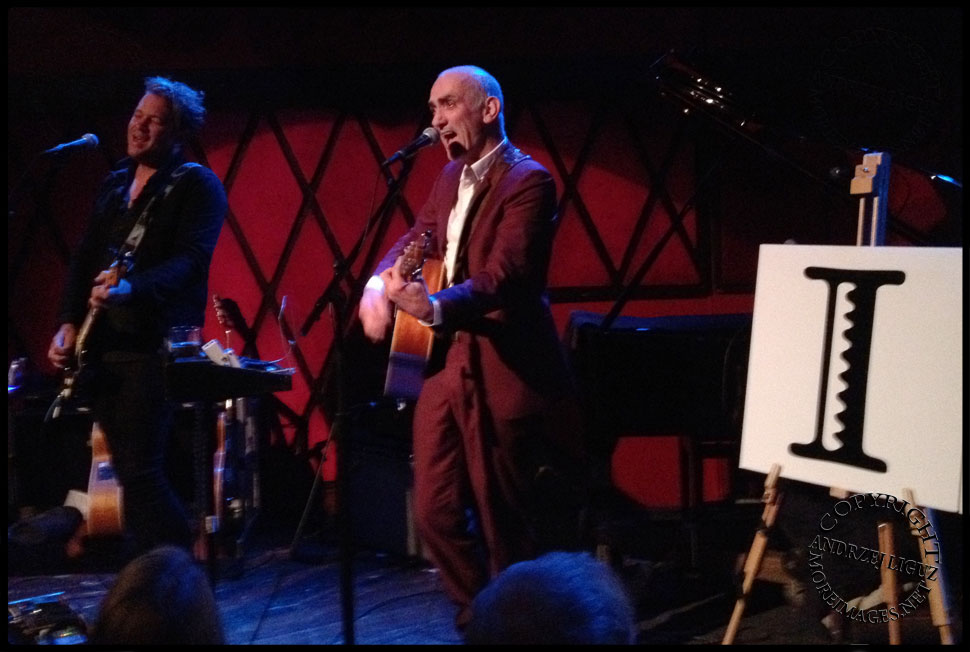 Dan returned as Paul told us he was walking by a fruit and vegetable shop one day when he heard Van Halen’s ‘Jump’ blaring from inside, so he went home and wrote ‘Jump To Love’. As he turned the next letter to ‘K’ somebody shouted out for him to sing ‘Just Like Animals’, but Paul said he hadn’t played it for ages and Dan told him there was too much pain wrapped up in that song.

And the mood was definitely upbeat by this point as we were in the final stretch of the show – the entire audience clapped along to ‘Keep On Driving’ and Paul struck a serious Elvis pose at the end as he pointed at the audience. ‘Keep Coming Back For More’ had Dan holding down a driving swamp blues riff as Paul howled at the moon.

When Paul announced the next song was to be the last, a girl in the audience shouted out “We love you Kelly” to shouts of agreement from the rest of the crowd. At the end of ‘Little Decisions’ he sang “I don’t want to hear about yr big decisions” and staggered around the stage with his arms open wide as if holding the weight of something seriously heavy.

After the crowd had made some serious noise, Paul returned to the stage and informed us “I did have another couple of songs in mind”, to which the audience responded with good-natured laughter. The salutary story behind ‘Little Boy Don’t Lose Your Balls’ was lost amidst the laughter of the punch line chorus, but things got very quietly reverential for the desperately angry blues of “I Won’t Be Your Dog Anymore” that featured Paul on haunting harmonica at the end. 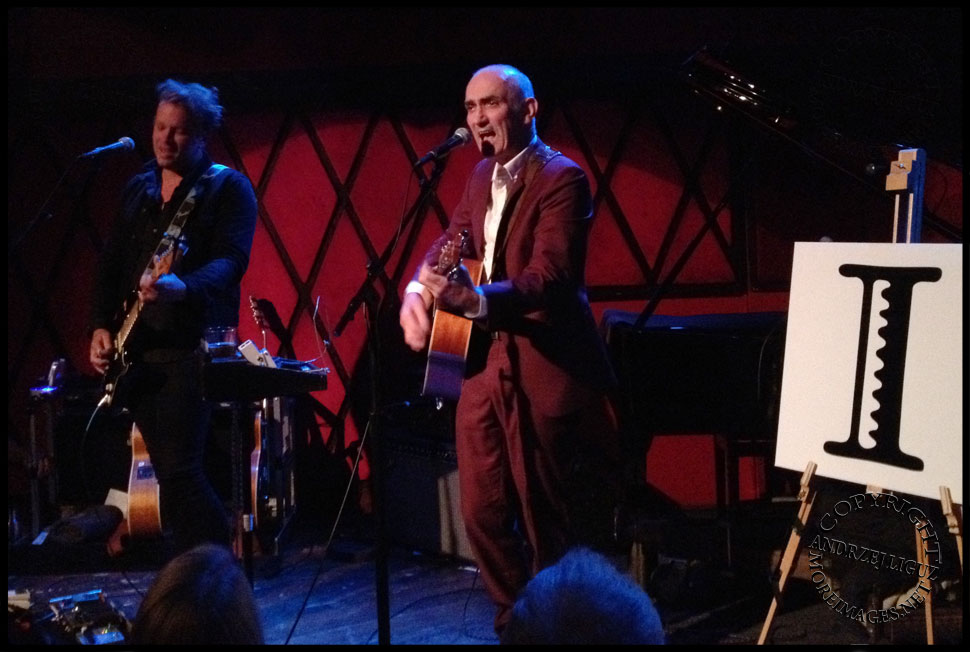 The Australians in the audience sang along with the opening lines of the uplifting ‘Leaps And Bounds’ and smiled swaying to thoughts of Australian sunshine. But that wasn’t quite the end of the night as Paul and Dan came back for a second encore and did a great version of ‘Look So Fine, I Feel So Low’, which reminds me in so many ways of ‘Help’ by The Beatles.

The audience were left wanting more and no doubt they will be back tonight for the next stop in this musical journey. Paul told me after the show that the third night is always different to the others as it features less well-known songs and much darker lyrical content. So I am definitely looking forward to what tonight will bring.

I also talked with Dan, who gave me a copy of his excellent album ‘Dan Kelly’s Dream’. I dropped it into my computer when I got home and I recommend it very highly. I’d like to give Paul’s A-Z Box Set the same kind of hearing, but haven’t had the opportunity yet.

And I will add that I almost feel like I should get in touch with Apple to let them know they can use me for advertising purposes. Am genuinely surprised at the quality of the pictures I took last night with my new iPhone 4S. Tonight will be different though as I just received an email from Paul’s tour manager Greg informing me that I can shoot with my real camera. All I need now is for Paul at some point in time to agree to give me ten minutes so I can finally do the photo shoot I’ve been wanting to do for the last 20 years and I will be an extremely happy man. But I now live in NYC and not in Australia and I know Paul really doesn’t like having his picture taken, so I don’t hold out much hope of that happening.

Tomorrows show is sold out, so if you live in NYC and want to treat yourself, make a point of going along to Rockwood Music Hall on Allen St in the Lower East Side tonight.