Paul Kelly in NYC: A To E Is Just The Beginning.

Paul Kelly played the first of his four A-Z shows tonight at Rockwood Music Hall. I am illustrating this by using a picture of NYC I shot last week instead of a shot of Paul Kelly, as I was informed before the show that no pictures would be allowed. So I didn’t take my camera. 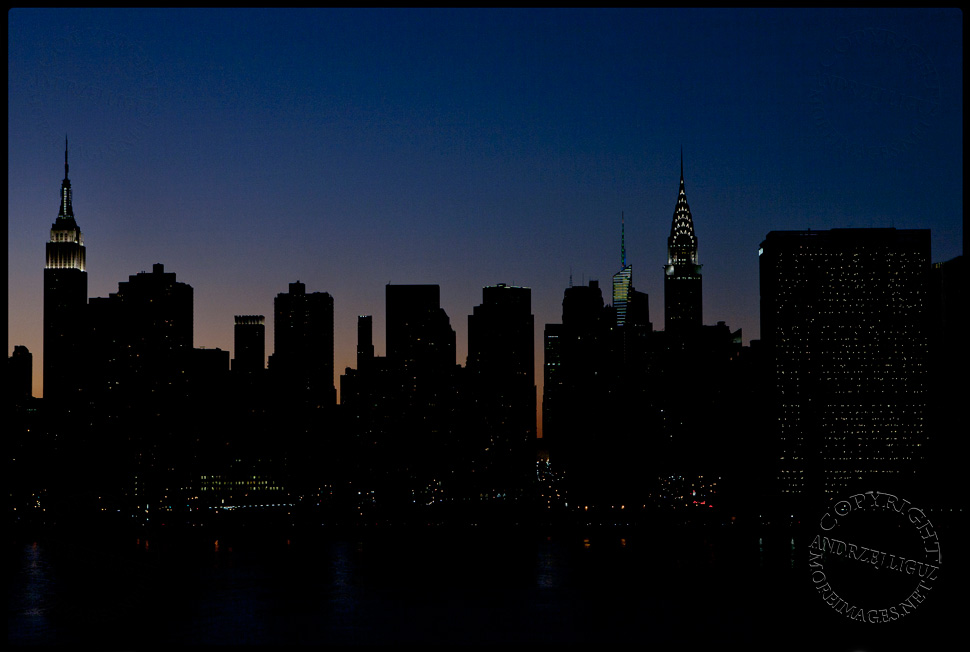 NYC Sunset © Andrzej Liguz/moreimages.net. Not to be used without permission

But I did take some pics on my iPhone. And this picture is one of them. But I don’t think the quality is good enough to blow up to be big enough to post as the first picture on the blog. But it can just about handle it at this size. I didn’t feel bad about using my phone as so many people around me were using their phones. And lots of them were activating the flash on their camera. But I didn’t. 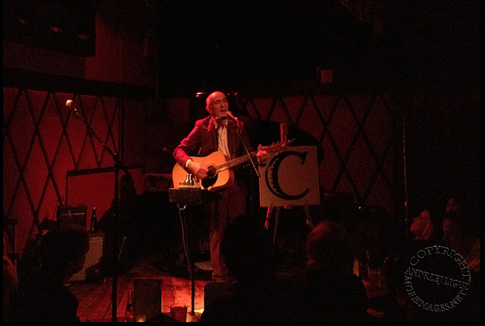 But I digress. It was a great show and didn’t disappoint in any way whatsoever. Although some guy behind me kept shouting out for ‘Bradman’. Which wasn’t going to happen as most Americans would probably get very confused trying to follow a song about an Australian icon. Who played cricket.

I realized as I was watching Paul perform that it’s almost twenty years since my pictures were on the cover of Paul Kelly: Live, May 1992. Time marches on and waits for no one. And this winter I’m feeling it.

He opened the show with ‘Adelaide’ and ‘Anastasia’, much like on the superb A-Z box set. ‘Before Too Long’ and ‘Blue Stranger’ were exquisite and ‘Careless’ was completely sublime. Before introducing the dark new song ‘Cold As Canada’, he asked if anybody recording would not put it out on the net as he’s planning to release it on a new album later in the year. It opens with one of those simple Paul Kelly verses that say everything in so few words “Morning comes cleaving in, like a sick and pale child, she leaves him there sleeping, there’s no simple way to say goodbye”. I look forward to hearing the recorded version of this stark story telling the end of a relationship.

Paul told us that he wrote ‘Cities Of Texas’ after he woke up one morning on his first tour of America with a band, walked to the lounge at the front of the tour bus and saw Dallas shimmering in the sun. He also told us after Dan Kelly’s superb echoing Twin Peaks guitar had faded into silence that he sends it to Willie Nelson every couple of years, but still hasn’t heard anything back.

‘Coma’ led us into the twenty minute intermission, during which I bumped into the very cool Katy Steele from the Perth. Before moving to NYC a couple of years ago she had a good level of success in Australia with her band Little Birdy, but felt the need to break away and explore new pastures. She told me she’s in the process of finishing her new electronic oriented album, which should be ready for release in the next few months. 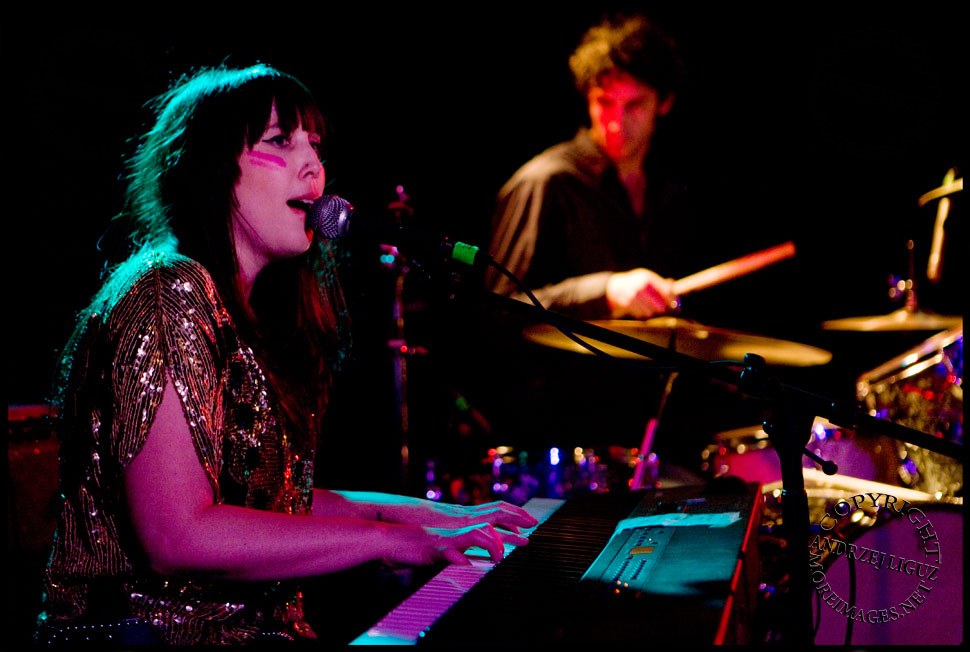 Katy Steele performing at Mercury Lounge, NYC 2010 © Andrzej Liguz/moreimages.net. Not to be used without permission

It’s worth noting that her family raises the case that there is a lot to be said for genetics. Her father, Rick, is a well respected guitarist who has been President of the Perth Blues Club since 1992 and her brother Luke had massive worldwide success a couple of years ago with his electronica band Empire Of The Sun and before that with Americana tinged The Sleepy Jackson. Full disclosure – I shot the cover of The Sleepy Jackson’s first album, which featured Luke with my daughter and her best friend.

The Sleepy Jackson Single and Album artwork flanking the original picture © Andrzej Liguz/moreimages.net. Not to be used without permission

Paul returned to the stage with ‘Charlie Owen’s Guitar’, his paen to Australian musician Charlie Owen, who has played with the mighty Beasts Of Bourbon as well as host of other Australian bands. ‘Curly Red’ was dedicated to red headed girls and ‘Deeper Water’ brought a cheer of recognition from the audience.

The superb ‘Desdemona’ is Paul Kelly’s short version of Shakespeare’s Othello whilst ‘Difficult Woman’ was written after Australian soul singer Renee Geyer approached Paul and asked him for a song. When he called her back to let her know he’d written something for her, she insisted he sing the words down the phone to her. As he explained last night, he reluctantly acquiesced and when he finished there was what felt like a long silence at the other end of the phone. The silence finally broke and she told him he should come over as she’d try it.

‘Don’t Start Me Talking’ led the way into ‘Don’t Harm The Messenger’, which was the middle of a trilogy of ‘Don’t’ songs. There was a definite sense of being allowed behind the curtain of a songwriters craft as Paul let us know he had become stuck with the song and decided to get amazingly talented but sadly now deceased Grant McLennan from the Go-Betweens in to speak the third verse. And now the song serves as a reminder of Grant every time he plays it.

‘Don’t Stand So Close To The Window’ was described as a country waltz with all things country, including drama and sticky beak neighbors. I looked around and wondered if the Americans understood that a sticky beak neighbor is somebody who wants to know all your business.

‘Down To My Soul’ slid easily into crowd favorite ‘Dumb Things’, where Paul sung his hips and guitar like a young Elvis, eliciting shrieks of joy from the ladies.

It was time for this first show to end and so Paul took time to thank Dan Kelly for accompanying him as well as Steve the guitar tech and Greg on sound. He also made a point of thanking Rockwood Music Hall for the extremely unusual and useful buzzer in the band room that would let bar staff know when to bring drinks for the musicians. He finished the set with a beautiful version of the stark

‘Everything’s Turning To White’, which is based on the short story ‘So Much Water, So Close To Home’ by Raymond Carver.

The crowd bayed for more and after a couple of minutes Paul reappeared and did an updated version of his classic travelers song, ‘Every Fucking City’. He amended the words to include “At a cafe in the port of Amsterdam a tweet from you said you’d gone to Rome” and at the end he sang “Yeah, every fucking city’s just the same” but added “Except New York” to a huge cheer from the crowd.

He stepped out from the A-Z format at the end by performing ‘Blush’ and then finishing the encore with ‘After The Show’.

As I’d seen a couple of photographers taking pictures during the show, I asked Greg (who is also the tour manager) afterwards if I could bring my camera over the next couple of nights and he told me that was not something he could tell me I could do. So I’m going to email Paul’s management again to see if they will let me take some pictures quietly from the back for a couple of songs so I can use those instead of using my iPhone to illustrate this blog over the next few days.

I talked with some people after the show and discovered one couple had travelled all the way from Kansas for these shows. I’m impressed. That is serious dedication on a scale I used to have many years ago. Back when I was in my very early 20’s I saw Springsteen play The River tour in Berlin, Rotterdam, London and Birmingham. Ironically enough Springsteen is playing The Apollo on Friday night and much as I would like to be there, I don’t think I will as I am seeing Paul that night.

Before leaving for the night I had a brief chat with Dan and then touched base with Paul, who I left sharing whiskey’s with Katy Steele. I’ll be back there tonight for the next installment of the NYC A-Z shows. There are a few tickets left at the door, so if you are in NYC I suggest you make your way down to the Rockwood. Paul will be onstage at 7.30pm. See you there.