Pengu!ns are Go! Watch them fly….

Pengu!ns is a band formed by my daughter Sharna (aka Sshh) and her boyfriend Zak. They are very cool and they are going to be very successful. This picture was taken towards the end of a show they did a couple of weeks ago at The Stags Head in Hoxton, East London. 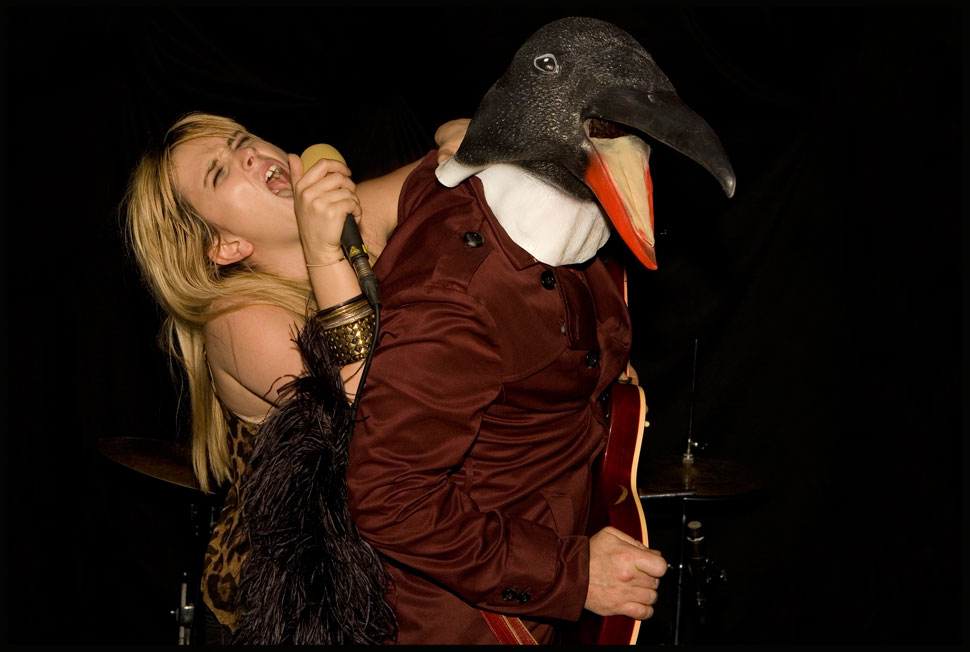 Hellzapoppin’ Pengu!ns © Andrzej Liguz/moreimages.net. Not to be used without permission.

They were supporting The Shoestrung, who are an amazing band that play 60’s white boy r&b in the style of Them, the Small Faces, early Rolling Stones & Beatles etc.. It was the first of their regular residencies at The Stags Head which will be held on the first Thursday of every month for the next few months. If you are in London go down and catch them as they are truly extraordinary.

But I’m not here to talk about The Shoestrung, as I’ve done that before. I’m here to talk about Pengu!ns. Which I’ve wanted to do for quite a while in this forum. But I’ve been waiting. I was ready last week but then I got busy and shot over 1500 pictures in 5 days. Of INXS, Razorlight (twice live and one session) and Shihad. And then had to edit and process them. And then on Monday night I went to the Metal Hammer Awards.

I was supposed to see Pengu!ns two months ago when I first arrived in London, but missed my flight. In the process of trying to catch it I lost my phone and spent over $200 on taxis in NYC. Sometimes, they’re the breaks.

Sharna and Zak got together about 7 years ago (respect) and started making music casually about a year after they met. Since then they’ve built a formidable arsenal of songs. They began playing shows around London a couple of years ago, the first of which was listed in the NME as Gig Of The Week. Zak is universally recognised as possibly the best drummer in the world, but what most people don’t realise is that he is also an amazingly talented multi instrumentalist. The two of them together have created all their music and artwork themselves. They’ve become a self contained unit. A band. And Zak has switched to guitar so they can perform live as a duo. 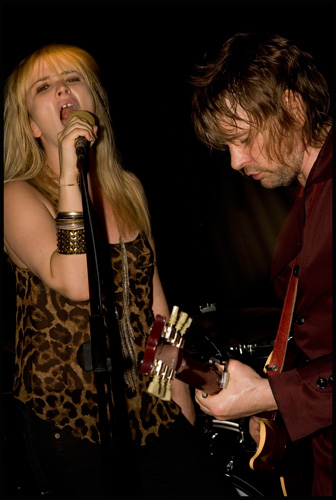 In many ways Pengu!ns is an extension of their relationship as they play out all the dramas of life on their stage. It was amazing to watch the connection between them as they romped through a great version of ‘Rising Tide’ in their rehearsal studios the week after I arrived.

Pengu!ns supported Beady Eye in Edinburgh and Newcastle a week later, but unfortunately I couldn’t make it to those shows. They were then booked to support Kasabian in Leeds and Wolverhampton and decided to play at The Stags Head in Hoxton as a warm up show.

So I finally got to see Pengu!ns play for the first time. They put on a great show, even though the sound left something to be desired, but that was to be expected in the tiny pub.

I decided to see the full show in a better environment, so last Tuesday (7th June) I caught a train to Wolverhampton, to catch their second show with Kasabian. It was a definite improvement as the sound was a lot better and I believe this is going to be a band to watch in the future. Highlights included the mighty slab of sound that is ‘Self Control’ and the post punk vamp of ‘Space Invada’. The sonic assault of Hellzapoppin’ closed out the show and made the way for Kasabian to capture the crowd in the palm of their hand.

Pengu!ns didn’t play my favourite songs, but its not my band. Its theirs. So they play what they want. They currently have one song on youtube, Hellzapoppin’, which is worth checking out. I wish you could also hear the glorious glam of ‘Jet Engines’, the psychedelic swirl of ‘Rising Tide’ and the stunning electropop of ‘I Love You’. Those three songs are phenomenal and guaranteed to be Top Five hits, if not Number One when they finally appear. But you’ll have to wait to hear them as Pengu!ns are keeping them close to their chests for the moment.

I’m proud of my daughter and the music she makes with Zak. Pengu!ns have their own sound. Listen out for it.