Cocaine kills smart people as well as stupid ones. And cocaine does tend to make the smart people stupid. Which is why they die. Gil Scott-Heron died last week. I took this picture at Hammersmith Odeon in 1986 when he was so out of it as he walked on stage that he fell on his ass. 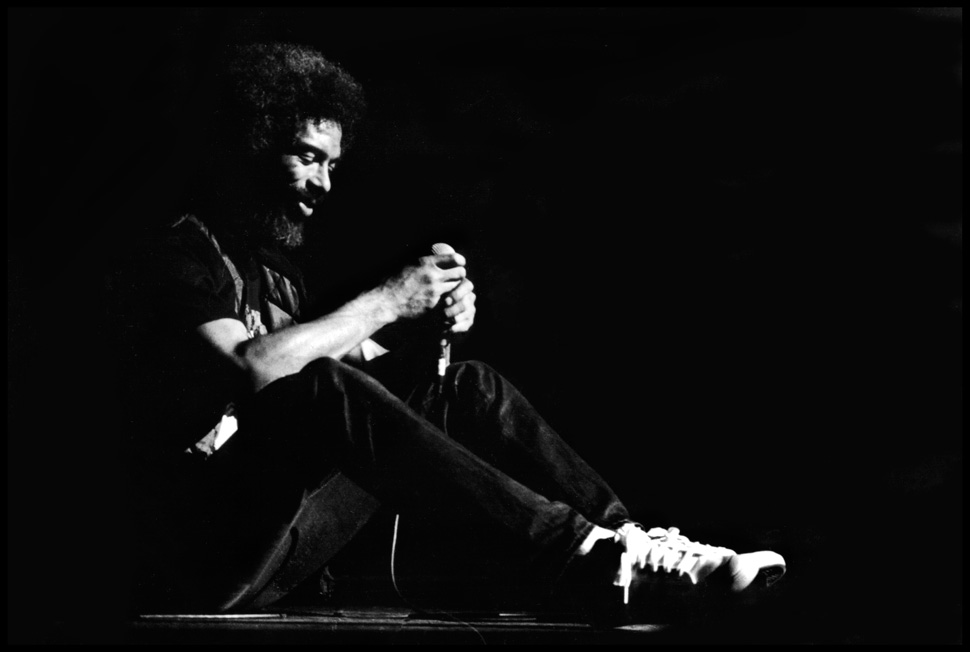 Gil Scott-Heron © Andrzej Liguz/moreimages.net. Not to be used without permission.

Addicted to cocaine for most of the last 30 years, he was a shining example of how that drug can destroy the most agile mind. I first came across Gil Scott-Heron when I heard ‘B Movie’ from the album Reflections in 1981. A searing indictment of Reagan and everything he stood for, it was a remarkable slice of protest music that moved the brain as well as the feet. Which was his specialization.

Regarded as partly responsible for the birth of rap, Scott-Heron always acknowledged the debt he owed to The Last Poets, who came before him. But he took what they started and with the help of musician Brian Jackson (who, incidentally, was STILL owed royalties by GSH when he died and never got the recognition he should have for developing the GSH sound) developed a groove-laden direction that laid the foundations for ‘Conscious Hip Hop’, as practiced by artists such as Chamillionaire, Common, Mos Def, Talib Kweli and Lupe Fiasco amongst others.

He released 14 albums, two books of poetry and a novel between 1968 and 1982 and then all went quiet as the addiction took hold and sucked the marrow from the bones of his inspiration and talent. In 1994 he released the average ‘Spirits’ album which was mostly notable for the song Message to The Messengers, where he tried to encourage Gangsta’s to be more socially conscious. Last year he released ‘I’m New Here’, which was a much better offering than ‘Spirits’. But still, two albums in 28 years? Not exactly prolific.

I worked a lot with Gil Scott-Heron when I first started my path to becoming a professional photographer. I remember his tour manager was constantly on edge because he never knew whether Gil would actually show up for the gig or not. There were many occasions when he would appear with only minutes to spare before he was due on stage. One of my favourite memories from that era is standing side of stage at some festival whilst Kim Jordan, his amazing keyboard player, was laughing wildly at her hands speeding across the keys as if they belonged to someone else and she could only watch in wonder.

I last saw Gil Scott-Heron in Sydney about 7 or 8 years ago. When I went backstage afterwards to say hi I was shocked at how much older and skeletal he looked. The abuse had obviously taken its toll on his body.

(7/18/2011 Update: I have to add in here that I met someone last night who went to Gil Scott-Herons’ funeral. She told me she’d heard that when he was on tour in Europe he was bitten by an ant and that is what caused his death. She went on to tell me that he had cleaned up his act in the last couple of years and because his body was so clean, when he was bitten, the poison from the ant was enough to kill him. My response was that in all likelihood his immune system was so weak from the years of abuse that it couldn’t deal with the toxicity. I’ve since remembered that he was diagnosed with HIV some time ago and so no doubt that is what contributed to the weakness of his body and it’s inability to deal with the ant bite. And so a giant of music was felled by an ant.)

Cocaine seems to have become cool again over the last few years. I remember being in London 5 years ago and watching in amazement as some friends piled out of the pub at closing time, went straight into the phone box outside and started racking up lines. On a busy main road. In full view of everybody.

The problem with cocaine is that even though it can be fun and give the impression lots is being achieved, quite often the long term effect is the opposite. A piece of work (eg: picture or song or story or painting etc etc) can end up getting over worked as perspective gets lost (eg: GSH did 2 albums in 28 years). And the price paid is higher than the value of what is achieved. But these obvious facts don’t stop people taking it.

Statistics show 5 times as many people in the UK now use cocaine compared to 15 years ago and the average street purity has fallen to 15.5%. Purity also fell in cocaine seized by customs from 67% in 2007 to 56% in 2008. In all likelihood, its probably dropped again. Which means the suppliers are cutting it by half before it even gets into the country. So for all those people who think they are getting the good stuff in the UK, you’re not. It’s already at least half full of rubbish.

British police told the UN in 2009 that almost a third of their street seizures now had a purity of less than 9%. In some cases purity had fallen to as low as 5%. They went on to observe that “the increased dilution of cocaine within the UK also suggests the establishment of large international trafficking activities in cutting agents which are usually legal substances when they are not used to adulterate cocaine. The Serious Organized Crime Agency (SOCA) seized some 15 tonnes of such cutting agents over the last year, which is more than the amount of cocaine seizures”.

And it’s hard to imagine that the cutting agents are good for you. Never mind the ravages on the body and brain of the cocaine itself. One of the most identified problems of over (ab)use is the over inflated sense of self-belief. Which is probably why its often been a drug of choice for musicians and stock brokers. On the one hand it can bolster those lacking confidence (of which there are many in the creative worlds) and on the other hand I’ve known a few who ended up believing their own publicity and lost their way on the rails whilst believing they were following the right path.

Not long after I started my career as a photographer I saw a musician come off stage after playing a show and within 2 minutes he was in the back of his dealers car doing lines. I thought it was a rock cliche at the time. I saw the same scene again earlier this year, but with someone I care about. And that worried me. And so now I don’t care about the cliche, I care about the person. You have to know things are serious when they reach that point. As another musician friend of mine put it: “Anything taken to an extreme is bad for you. All things in moderation”.

As noted by Elizabeth Damore in her essay ‘Cocaine and the Nervous System’: “All drugs have a negative effect on the nervous system, but few can match the dramatic impact of cocaine. Cocaine is one of the most potent, addictive, and unpredictable recreational drugs, and thus can cause the most profound and irreversible damage to the nervous system. The high risk associated with cocaine remains the same regardless of whether the drug is snorted, smoked, or injected into the user’s bloodstream. In addition to the intense damage cocaine can cause to the liver, intestines, heart, and lungs, even casual use of the drug will impair the brain and cause serious damage to the central nervous system. Although cocaine use affects many components of the body, including vision and appetite, the most significant damage cause by cocaine takes place in the brain and central nervous system.”

I don’t mean to come across as holier than thou here. I’ve always been an extremist in all kinds of ways. I’ve walked with plenty of people who have wandered all sides of every line available. And at the end of the day the choices people make are theirs to make. As long as their decisions don’t harm others. I learnt a long time ago that it’s important to take responsibility for one’s actions and the consequences of them.

The problem for me now is that I’ve buried a few people and known others who lost their way and never came back. And I don’t want to go to any more funerals for people who’ve died from drugs. Especially ones I care about. So if you can’t say no (all the time), then take a break and remember to keep things in moderation.

Which is kind of a strange thing for an extremist like myself to propose. But I learnt that its the healthy way. We only get one body which we can’t trade in and the damage we cause isn’t always repairable.

And talking about someone lacking in moderation, I’ve just finished reading the stunning pair of biographies by Peter Guralnick about Elvis, the original rebel and first mega star musician to be known by a single name. ‘Last Train To Memphis’ covers Elvis from birth up until he went in the army. And ‘Careless Love’ details his life from the army (where he first got into pills and addicted to speed), until his death in a bathroom the night before he was due to leave on tour.

He was almost the embodiment of ultimate irony when he died. A prud holder of law enforcement badges from all over the USA, including one from the Bureau of Narcotics and Dangerous Drugs (BNDD) that Nixon had granted him after the BNDD Director had turned him down, he was seriously addicted to prescription drugs. And they killed him in the end.

The official line that Elvis died ‘due to cardiac arrhythmia due to undetermined heartbeat’ was released by the Chief Medical Examiner whilst the actual autopsy was still taking place. The two principal lab reports released to the family two months later both agreed the primary cause of death was polypharmacy. They detected fourteen drugs in his body, ten in ‘significant’ quantity. Codeine appeared at ten times the therapeutic level, Methaqualone (Quaalude) at close to toxic levels and three other drugs which appeared on the borderline of toxicity in and of themselves (one of which I suspect was cocaine). No wonder he died. If anything, its amazing he survived as long as he did considering how heavily he was getting trashed. Every day. The accumulation over a period of time became too toxic for his body to handle and so it gave up. Happens to everybody. Even Elvis. And Gil Scott-Heron.

I recommend the music. And the books. But not the lifestyle either of these icons lived. R.I.P. to them both.