I used to be a Mutoid. So did Joe Rush. But then again, Joe started the Mutoid Waste Co., so it’s a lot harder for him to say he used to be a Mutoid. And although he walked away for a while, he did find his way back to the heart of what he started. And redefined himself in the process. Found a way of being humble whilst still recognising himself as the Originator. In other words, Joe Rush grew up. Like we all do. 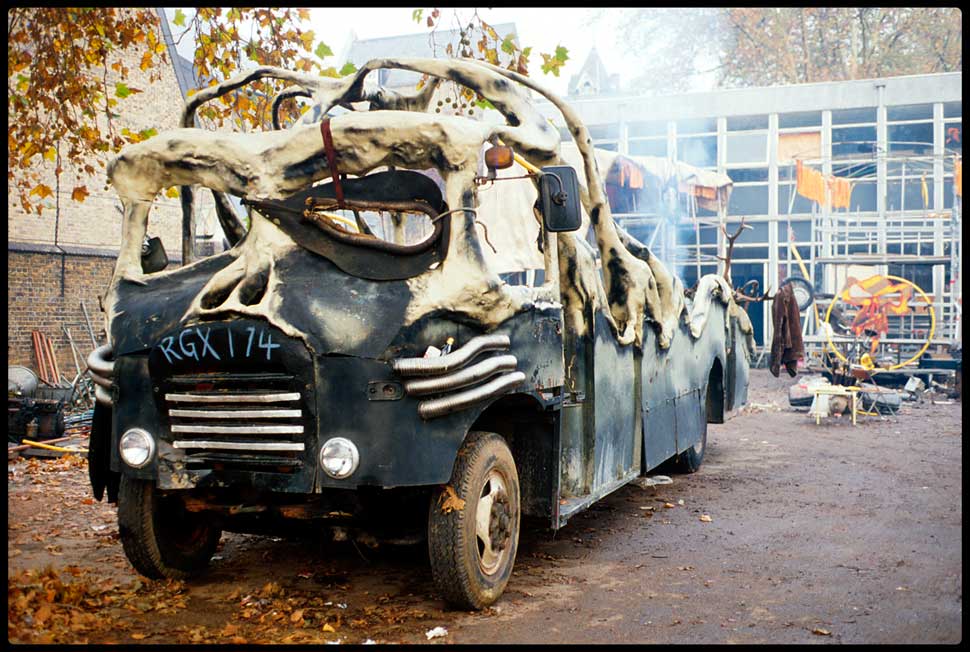 The Skull Bus in Ladbroke Grove 1987 All images © Andrzej Liguz/moreimages.net. Not to be used without permission

Joe is currently visiting NYC as he had a sculpture in an exhibition that opened last night. And so he is sleeping on my couch, which is what has inspired me to finally return to this blog. Which was long overdue. So now I will be back to daily posts. Over the last 20 years I’ve met a lot of people who build sculptures from scrap. I’ve even built a few myself. But I still regard Joe as the best of the bunch, a genuine Sultan Of Scrap.

He originally came up with the idea of the Mutoid Waste Co. in 1984 as Margaret Thatcher was laying waste to England’s green and pleasant land. He started making sculptures in a mews garage in west London and then taking them down to Portobello Road markets to entertain people. Robin Cook was a mechanic working in the mews garage next door to Joe. Over time, Robin watched Joe carry a bunch of scrap into his space and one day decided to knock on his door to see what was going on in there. Joe invited him in and showed him what he’d been making. The sculptures were cool but not welded very well, so Robin made the welds stronger and taught Joe how to improve his welding. And Joe taught Robin about the aesthetic value in scrap. And what it could become. Together they spearheaded a revolution that is still unfolding around the world. They grew into a sprawling outlaw tribe of misfits and rejects from mainstream society with a punk sensibility and the aesthetics of Mad Max and Judge Dredd (the genius comic, not the movie travesty foisted upon us by Sylvester Stallone). 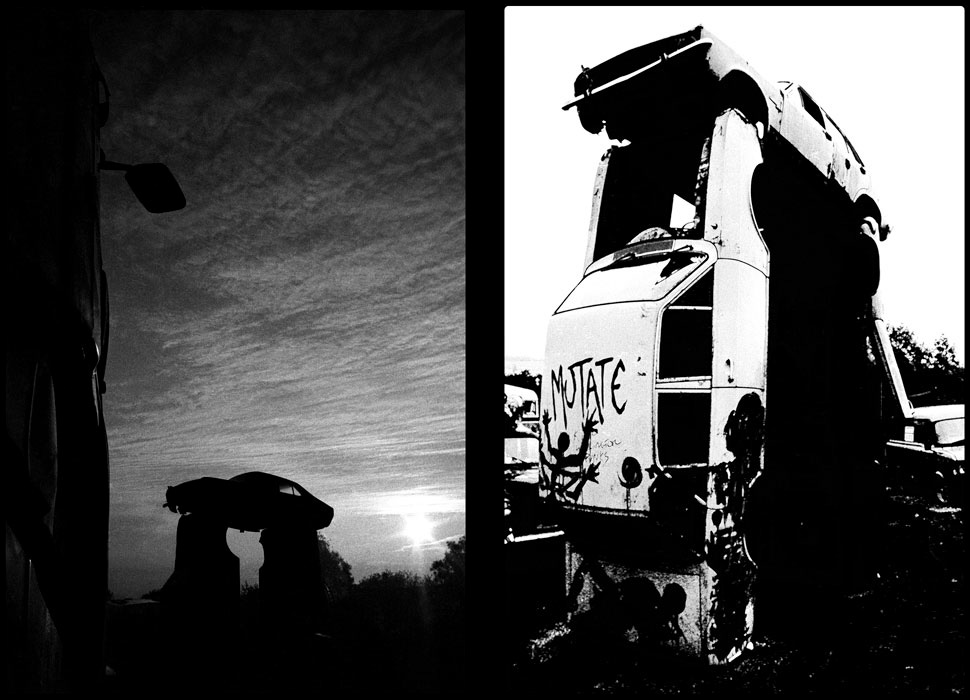 Carhenge at Glastonbury Festival 1987. All images © Andrzej Liguz/moreimages.net. Not to be used without permission

I came across the Mutoids when they built Carhenge at Glastonbury in 1987 and could immediately relate. They lived an itinerant gypsy lifestyle with most of them sleeping in buses and trucks at the abandoned schools and industrial sites they squatted. At that time I had my own squat in the genteel neighbourhood of Primrose Hill in North London. I’d grown up bouncing around 13 schools, being shoehorned into second hand clothes by my mother and had graduated to filling the places I lived with what I found on the streets. The year I lived in Australia before I met the Mutoids, I’d spent far too much time hanging out at scrap yards and tips with my good friend Jonh Ridley (with whom I ended up building The Recycle in Sydney. But that is an entirely different story).

The Mutoids had an energy that was missing from everything else in England at that point as most people were running scared and keeping their heads low as Thatcher had seriously stomped the Free Festival movement at Stonehenge in 1985. The Crusties were drowning in cider, the Punks by that time were as much of an anachronism as the Hippies and Rave culture was still 12 months away. None of us knew it at the time, but in all likelihood it is unlikely the Rave Revolution of 1988 would have happened without the Mutoid Waste Co.. They created a social environment that was lysergically benevolent for the first time since the late 70’s, which allowed the freaks to come crawling out of the woodwork and play. Again. 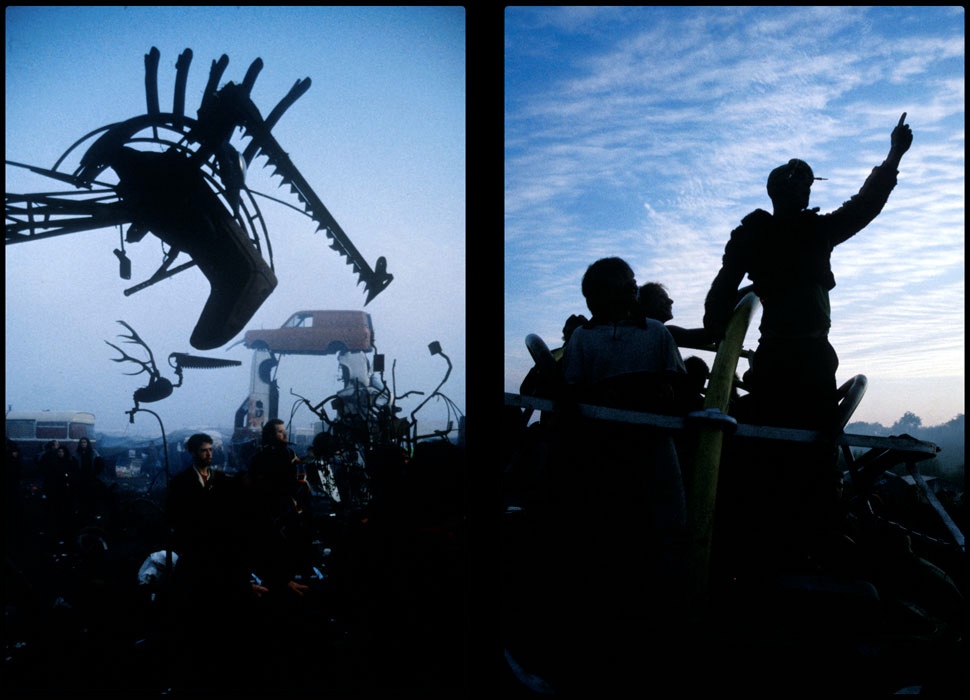 Glastonbury Dawn / Joe Rush on the Terroid © Andrzej Liguz/moreimages.net. Not to be used beyond this website without permission.

After spending the night dancing with the dreamers around Carhenge I watched dawn rise on the Longest Day and knew everything was going to be different from that point on. The creative chaos that is the Mutoid Waste Co. became the centre of what was really happening. It was the ‘real’ underground setting up camp in the middle of the mainstream. I abandoned my idea of photographing the bands on the main stage and spent the rest of my weekend wandering their encampment with a sense of wonder and relief.

I met Joe and his then girlfriend Ann-Marie, who it turned out lived around the corner from me in Primrose Hill. As we were neighbours, I became friends with Anne-Marie and hanging out with her once we were all back in London. A few weeks later I headed north to Edinburgh for the Festival, where the Mutoids had been invited to take over a big hole in the ground. They showed up expecting that they would simply be installing their sculptures and were informed they also had to produce a show every day. Which was the beginning of the Mutie band. 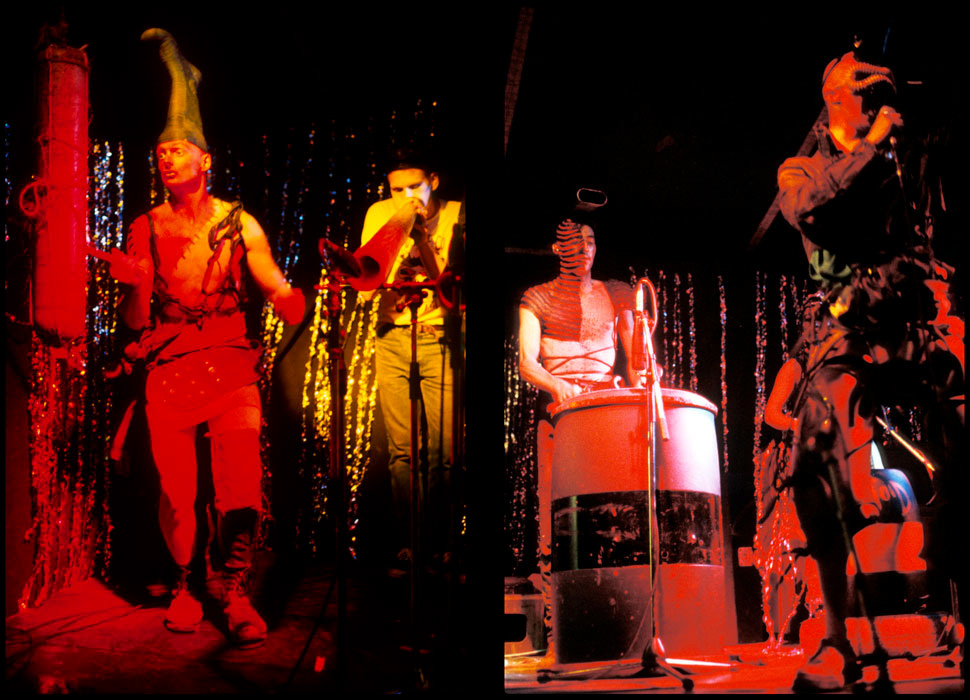 Strapper / Ivan & Joe performing at Edinburgh Festival 1987 © Andrzej Liguz/moreimages.net. Not to be used beyond this website without permission.

Joe became the Mutant Preacher, Ivan and Andy led the drumming, Strapper hit hell out of an oxy bottle and the twins Carl & Barry became a seriously twisted part of the show. The Mutant Preacher would ask for a volunteer  from the audience. Barry would offer himself and Joe would ask him if he wanted to be ‘Mutated’. His long dreadlocks swaying in time to the music, he would agree to undergo the process required. Joe would then lead Barry out the back of the stage and 30 seconds his identical twin Carl would leap through the silver curtain with his head shaved and wielding an industrial angle grinder, which he would use to great dramatic effect by chopping up tables as the good people of Edinburgh still sat at them.

Joe The Mutant Preacher at Edinburgh Festival / Joe & Kenny in Ladbroke Grove 1987 © Andrzej Liguz/moreimages.net. Not to be used without permission.

I became a total convert to the cause and upon my return to London spent most of my spare time with the Mutoids. It was a strange life as I was working at the Limelight taking pictures of pop stars by night and hanging with the Mutoids by day at the old school in Ladbroke Grove. There were many remarkable people I became friends with at that time, not the least of which was the incredible Lucy Wisdom, who deserves her own post and will soon get one. 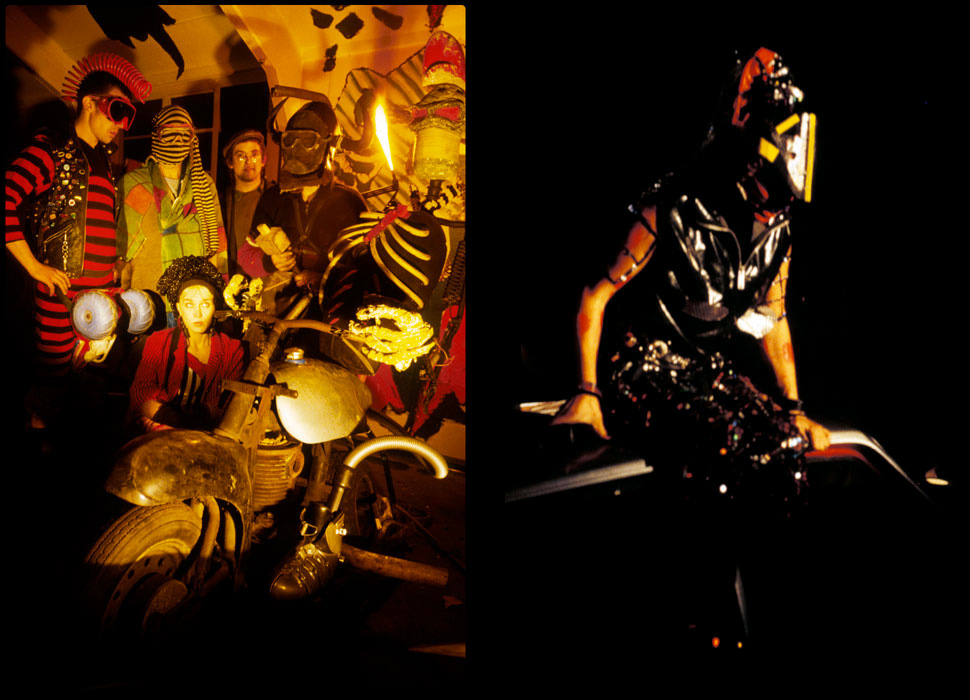 Muties in Ladbroke Grove / Lucy Wisdom 1987 © Andrzej Liguz/moreimages.net. Not to be used without permission.

Tragedy struck the Muties on November 18th 1987 when principal drummer Ivan Tarassenko was one of the 31 people who died in the Kings Cross fire at the London train station. One of the most remarkable speeches I’ve ever heard was at Ivan’s funeral, when his father, the renowned Atomic Scientist Sergei Tarassenko, spoke at length about the positive impact of the Mutoid Waste Co. on his sons life. He exhorted the Mutoids to carry on pushing at the boundaries of society because he genuinely believed in the depth of the vision they were expressing. Ivan is still sorely missed by all those who knew him.

When we were talking about this time the other day, Joe mentioned that somebody once asked him how he found all the people that made up the Mutoids. He told me he’d quoted Sonny Barger, the legendary leader of the Oakland Chapter of the Hells Angels. When Barger had been asked a similar question, he told the reporter that the Angels didn’t go recruiting in a conventional sense as they recognised their members before they even joined. And Joe believes the same principal applies to the Mutoid Waste Co.. It’s not something that is learnt from being with the Mutoids, but it’s something already inherent within the individual. And they bring that individuality to the Mutoids and in doing so, contribute to the collective

The Muties moved into an abandoned garage in Kentish Town in early 1988 and created a huge party there 3 days before I left for Australia. I thought I was going to be gone for 6 weeks, but ended up not returning to the UK until 1996. But that is another story. Tomorrow I will continue with my experiences as a Mutoid in Australia and beyond.

To see more images of the Mutoid Waste Co., check the M.O.R.E. (Ministry Of Random Events) Gallery on the website and read the previous blog about the Mutoids.