I first met The Boxer Rebellion at Notting Hills Arts Club in London when I was hanging out there a lot in 2005.  It was a Wednesday night, so it was Alan McGee’s Death Disco night. They’d just played a great set to about 100 people, maybe less. Sounding like a tough bastard child of U2 and Coldplay that was making out with Radiohead in the back seats, they were a revelation. Sweeping anthems abounded. It appeared McGee felt the same way as he’d signed them to his new label, Poptones, and was about to release their debut album, Exits.

All Images © Andrzej Liguz/moreimages.net. Not to be used or distributed beyond this website without permission

This is a polyglot band. Nathan is from Tennessee and moved to London looking for a new life after his mother died. He met Todd who had left Australia like Australians do and found himself in the center of the Olde Empire. Adam and Piers were locals looking to create something real with their Music School educations. I fell into conversation with Todd and we found that we had more than an accent in common as we shared a love for the same kind of music.

That meeting was fortuitous as I ended up doing a shoot with them and they used one of my images from Hampstead Heath inside the cover of Exits (the right hand picture at the top of the page). It was unfortunate that the day the album was released their record company (aka they ‘mighty’ Alan McGee) informed them that they’d been dropped. Poptones imploded two weeks later. And Mercury, who was supposed to be promoting and distributing the album ran for the hills. So no money at all was spent on promoting their album. Which was a real shame as it’s actually an excellent album. But that’s the music industry for you. Pick you up, fill your eyes with stars and then slap you down again.

Their manager had enough and left the industry. Unlike many other bands who’ve been in their situation and slunk off into the darkness with their tails firmly between their legs to be never heard again, The Boxer Rebellion lived up to their name and came back fighting. They found a promoter in Japan who agreed to fund some more recording and went back to work. Just before I returned to Australia to pack up my life and move to NYC, I caught up with them in the studio as they were making demo’s and they gave me 7 songs which I listened to repeatedly when I got back to Sydney. They seemed to have something going on.

It took them 4 years, but in 2009 they finally released their follow up album, Union. It came out exclusively through iTunes as they still hadn’t found a label to call home. Evacuate was the first single from the album and iTunes made it Single Of The Week. And over 500,000 people downloaded it. Instant audience. The album peaked at #4 in the iTunes UK top 100 album chart, and reached #2 in the alternative chart, both within 5 days of release. Unfortunately, due to the lack of a physical copy, Union could not enter the official UK chart based on downloads alone despite its high charting positions, a situation which achieved considerable media coverage. Which didn’t hurt the band at all. Nathan, Todd, Adam and Piers gave up their day jobs and embarked on the road to promote the album. 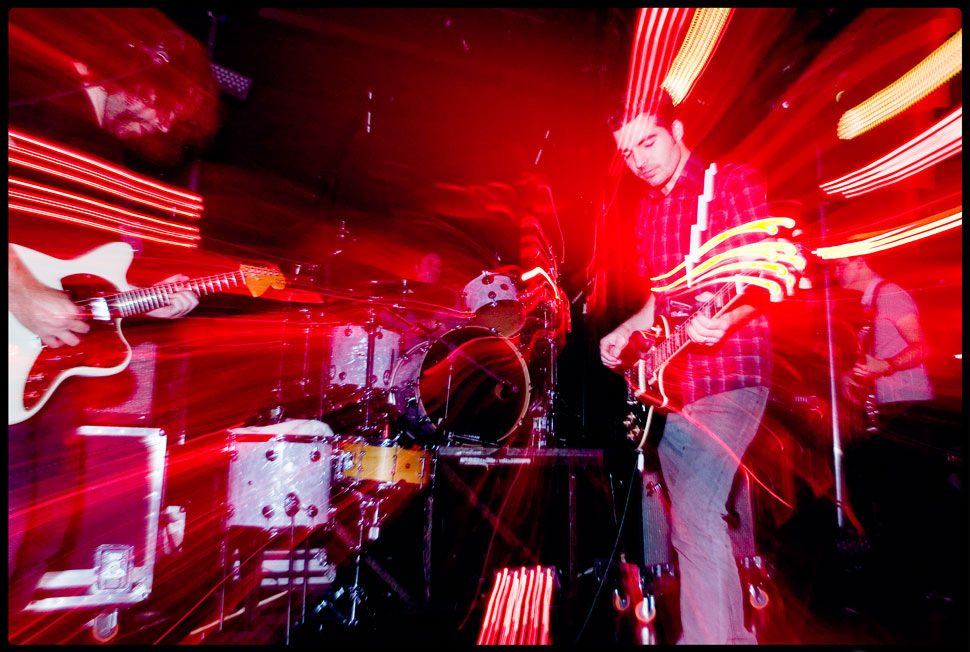 After all their bad luck (in 2005 they scored the support slot on The Killers tour when that band was riding high in the charts but Nathan’s appendix burst whilst they were touring with The Raveonettes immediately beforehand and he spent 5 months in hospital recovering), they finally hit a lucky streak. In 2009, whilst Union was starting to take off, they filmed scenes playing themselves at The Bowery Ballroom in NYC for ‘Going The Distance’, a film starring Drew Barrymore than sank without a trace but gained them an audience. Of girls. Nathan is blessed with movie star good looks and girls swoon in his presence. Not a bad thing. At all. Always been that way and always will be. And the fact that he can sing and the band roars along behind him only helps.

Last Thursday I got a phone call from a friend of mine asking if I want to go to The Bowery Ballroom with her as some friends of hers in a (v cool) band called Amusement Parks On Fire are supporting some band called The Boxer Rebellion. I started laughing, told her I know the Boxers and would meet her there. I called Todd and he confirmed they were in NYC, so I made my way up the road to Bowery Ballroom and saw the band for the first time in almost 5 years.

Todd was busy getting ready to play with his friends The Augustines who feature an amazing Americana songwriter by the name of Bill McCarthy. They are definitely worth watching out for as they have an album ready to drop in a couple of months. But no label, so if there are any A&R people out there reading this, check them out. As Todd was busy I caught up with the rest of the band and they were all good and excited to be headlining The Bowery Ballroom. After a while their new (to me) manager Sumit, who has done an amazing job over the last couple of years, kicked me out of the dressing room and so I watched Amusement Parks On Fire and was entertained by their mix of Shoegaze and Power Pop. I caught up with my friend for a while but she was getting drunk, so I left her to it and made my way down to the front for the Boxers.

This is their first real tour of the USA and Canada and they are relishing the prospect of working here as this is the natural home for their music. Even though they were still jet lagged from their flight from England, they played a blinding show. It was particularly emotional for them as it was their first proper headlining gig in NYC and it was close to sold out. They were ecstatic and it showed.

They opened with the chiming These Walls Are Thin, rolled through town with Evacuate and killed Semi Automatic. The girls screamed and the boys grinned. We Have This Place Surrounded soared like an eagle over the city. Todd hunched and disappeared in a mass of hair as his guitar squalled like few do. The Edge needs to start looking over his shoulder as somebody has finally arrived to join him in creating entire soundscapes with a single instrument.

Todd & Adam moved onto snare drums for Flashing Red Light Means Go and the heavy rhythms created by the three drummers rolled around the Bowery as Nathans voice reached for the roof. They finished the night with Watermelon which matches Bullet The Blue Sky for ferocity and intensity. Nathan threw himself out into the audience and ran through them to the back of the hall singing all the way. The girls loved him even more for it.

Afterwards the band made their way to the merch stand where a long line had formed to meet and shake hands with the new heroes in town. The following night they played in DC to a full house and arrived back on Saturday to play in Brooklyn and shoot a video for possible DVD release with big grins. Even though their rental van had caught fire in DC, they know it’s all going well and the dice are rolling in their direction.

This band are on fire at the moment. They have a new album recorded and ready to be released in the new year. They are touring somewhere near you now. Find them on MySpace or Facebook for the tour dates. And go see them before they start playing the huge halls they are destined for. You’ll be able to tell your friends in years to come that you saw them on their first American tour.

If you like this, leave a comment and check out the rest of the site. It’s new.

Update: Today is 1st Feb 2011 and they just released their superb new album ‘The Cold Still’. Go find it on iTunes. And they are on Letterman tomorrow night, so tune in and check them out.