Village People & Courtney Love in NYC: Where was Lady Gaga?

First of all, welcome to the new home of MORE Propaganda: The Blog. As you may have noticed, this is my photography website. So if you want to see more of my pictures, go have a wander through the galleries. I’ve been working on it like a dog for the last week and it is almost finished – the holes in the galleries will be filled by this time next week. The genuine genius and my good friend Leo Plaw, who is now living in Berlin creating paintings and building websites, has very graciously done the make over on my site and I am extremely grateful to him for the time and effort he has put in to make the back end hum like a sweet machine. Drop him a line if you need any kind of web work done. The cool design on the front end was originally initiated by Victoria Fishel, to whom my thanks are extended. I’ve transferred all the previous blogs into here, so if you want to find anything use the search box or go through the archives. For those of you who haven’t been here before, this blog is dedicated to my photography. It will feature one picture, or a series of pictures about which I will write something. Please pass the link on to everybody you know and feel free to leave comments to let me know what you think.

And now, as I haven’t written any Propaganda for a few days, down to business.

Last night was a big Saturday night in NYC. The night before I was at the Bowery Hotel for a Fashion Week after party when I met Randy Jones, the former cowboy from Village People. He made a beeline for me across the crowd because I was wearing a straw cowboy hat and he could instantly relate because we shared headgear, if not headspace (although I don’t do boys and he does). He was delighted to discover my Australian accent and when he found out I am a photographer, he very sweetly insisted I bring my camera down to his birthday party, which was at Foundation Bar in the Lower East Side. There were free drinks from 9.30 until 11, but as I’m trying to get healthy, I didn’t get there in time to sample the free booze. Randy was in full swing when I showed up, surrounded by friends and admirers and grinning like the night was full of treats. Which it was. And this was only the beginning.

I hung with Randy and his friends for a little while before making my departures as I’d heard Courtney Love and Hole were going to play at Don Hill’s in NYC, a very small club with a capacity of 250 that is more like a Dive Bar. It reminds me of a punk club I used to go to in downtown LA in the mid nineties, whose name escapes me at the moment but if anybody out there can remember it too, please let me know. Recently come under new management, Don Hill’s has relaunched itself during this years NYC Fashion Week with shows by BRMC on Thursday, Iggy Pop & The Stooges on Friday night (I shoulda shoulda shoulda shoulda been there but didn’t find out about it until too late) and Hole last night. Canada’s weirdo electro terrorists, Crystal Castles played last night and NYC’s own Yeah Yeah Yeahs are playing tomorrow. Or is it tonight? Not sure which night they are playing, but it’s worth heading down to Don Hills to experience one of the few venues left in NYC that feels like NYC used to be. Porn pictures adorn the walls and 70’s style porn flickers on the TV, with the ‘naughty bits’ painted over frame by frame like some strange art project overseen by Vincent Gallo. 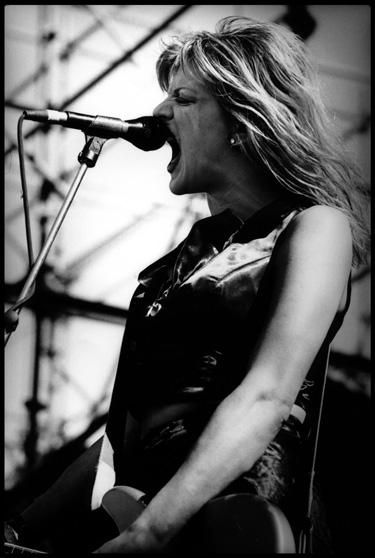 Anyway, I digress. Again. The last time I saw Courtney Love was in Sydney and Melbourne on the 1995 Big Day Out tour. She was, to put it mildly, a mess. I would have laid serious money on her being dead within 6 months. Kurt Cobain had died 9 months earlier and she looked to be trying to join him, hanging out with Al Jourgensen from Ministry at every opportunity and getting seriously wasted. I photographed her both live and hanging out backstage and she was a human cannonball looking for somewhere to land. (Full disclosure – I gave Big Day Out copies of some of the pictures I’d taken during the tour, which they passed on to the artists. Courtney Love gave her picture (on right) to author Poppy Z. Brite, who was writing a book about Courtney at the time. The picture subsequently appeared in the book, so I guess Courtney liked it.)

Before the band came on I was chatting with the guy who was videoing the show for the sponsors and he was wondering whether Courtney would come on as suburban housewife or wild woman of rock. He suspected suburban housewife, but I told him that I thought it unlikely. I’m not sure she knows how to really do suburban housewife. Hole is her ‘punk’ band and if she was going to be suburban housewife she would have done a solo album and collaborated with people like Jack Johnson and James Blunt. So nope, I was not expecting a tame time with Courtney. I also told him the infamous photographers story about Courtney. She had a habit of ‘going commando‘ and then hoisting one leg up on the monitors so the photographers below her in the pit in front of stage would get a ‘complete’ view of her. He told me he didn’t want to see that kind of picture. I laughed and struggled for some more room amongst the models and fashionista’s waiting to see who would arrive on stage: the trundling train wreck known as the ‘Most Controversial Woman In The History Of Rock’ (© Rolling Stone Magazine), the Oscar attending movie star or the semi suburban housewife.

And as it turned out, we got a combo package. The new Hole is not much like the old Hole. The danger, tension and personality of the band I saw in 1995 have been replaced by what appear to be blandly competent musicians guided by a boy guitarist who is young enough to be Courtney’s son and is milking his 15 minutes of fame for every drop of sustenance he can get. Even though Courtney didn’t bother to introduce him or the other members. Twenty four year old Micko Larkin found some kind of notoriety with Larrikin Love as part of the NME invented ‘Thamesbeat’ scene in London before hooking up with Courtney. Lucky boy. From Hammersmith to Hollywood by the age of 21 isn’t bad at all.

There is no backstage area, so the band made their way to the front and climbed up on stage through the audience. Courtney apologized for being late, commented that the place reminded her of 1992 and opened with a cover of the Stones ‘Sympathy For The Devil’. It was kind of strange to watch this woman sing “Please allow me to introduce myself, I’m a man of wealth and taste”. But then she’s always been a walking contradiction. The crowd of models and industry associates pushed towards the stage like Iggy Pop was up there. But he wasn’t. It was Courtney. The woman who’s been crucified more times than Jesus on the Cross of the Media. So she outstretched her arms and smiled. And the crowd surged. 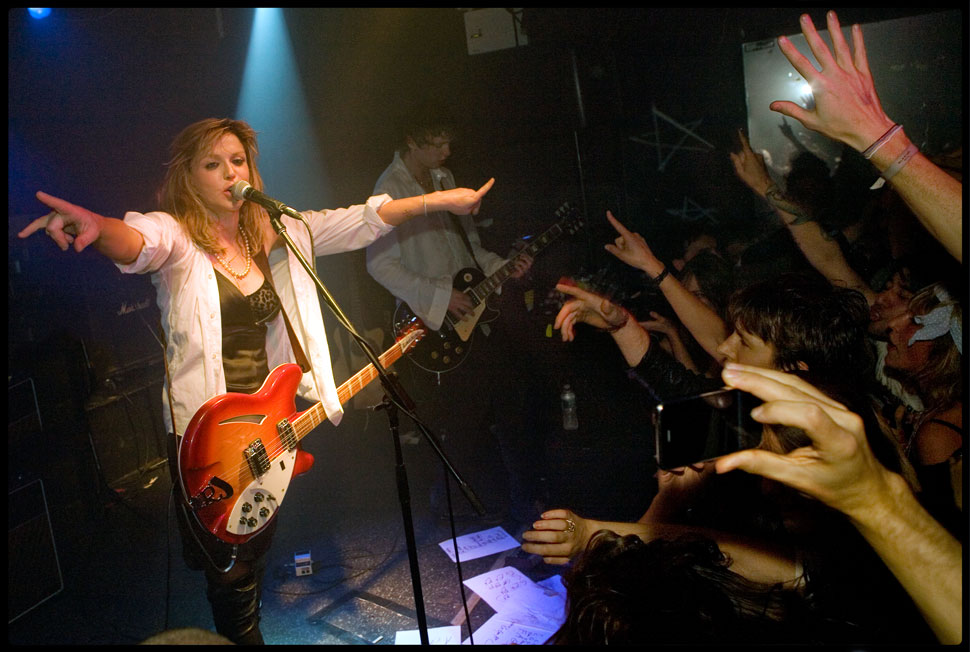 The best moment of the night for me was when she covered Bad Romance by Lady Gaga. Which raised the question: is Lady Gaga the new Courtney? And the answer has to be mixed. On the one hand, Courtney was seen by many as having ridden to success on Kurt’s coat-tails and then capitalized on it with some very cool guitar tunes, whereas Lady Gaga is seen as a unique individual in her own right. Lady Gaga is as controversial as Courtney was back in the day, but has gained far more fame and success because she didn’t bother being a punk, she’s just gone straight for the pop jugular. And sunk her fangs in deep. But she’s gathered the same audience Hole and Nirvana and Marilyn Manson used to have in the 90’s: the disaffected outcasts, the losers, the one’s who feel nobody understands them. She calls them her ‘Little Monsters’. So Courtney and Gaga are from the same family of freaks, just different genres. And I hope Courtney records and releases her version of Bad Romance as it’s almost like the song was written about her ongoing affair with fame, her fans and the media:

…I want your drama
The touch of your hand
I want your leather-studded kiss in the sand….

At the end of the day, a Hole show is a celebration of survival. And most people who go to see Courtney Love, go to see a survivor. And at least half of them are there to see if she is going to fall off the rails again. She is somebody who everybody knows has been through more than most should. And maybe some people back then thought she was the Nancy Spungen of her generation, but she was always a lot better than Nancy because she showed it’s possible that if you work hard enough you can develop enough talent to make some great music (as Hole did in the 90’s) and for being known as something more than a junkie.

So respect to Courtney for having made it. Both as a ‘star’ and to still be alive at this point in time.

As for me, I’m interested to see what Frances Bean ends up doing. She turned 18 this year and was part of an Art Show at La Luz de Jesus Gallery in LA during July 2010 under the pseudonym Fiddle Tim. Her artwork sold out. It’s not bad artwork, but I wonder if it would have sold out if she wasn’t Kurt & Courtney’s progeny. They say the child outshines the parent. Let’s see who Frances Bean turns into.

Today I’m listening to Celebrity Skin from Hole circa 1998