Respect. Chantal Ughi is the Thai Kick Boxing Female World Champion. I first met Chantal a couple of years ago when I was spending far too much time at Nublu on Avenue C in the East Village. Nublu was an amazing bar, full of characters and by far and away had more of the best professional musicians hanging out and playing there than any other bar I’ve been in. The Brazilian Girls started there when some friends began playing together for fun. Chantal used to work as the coat check girl and made videos on the side for Brazilian Girls and various other bands. 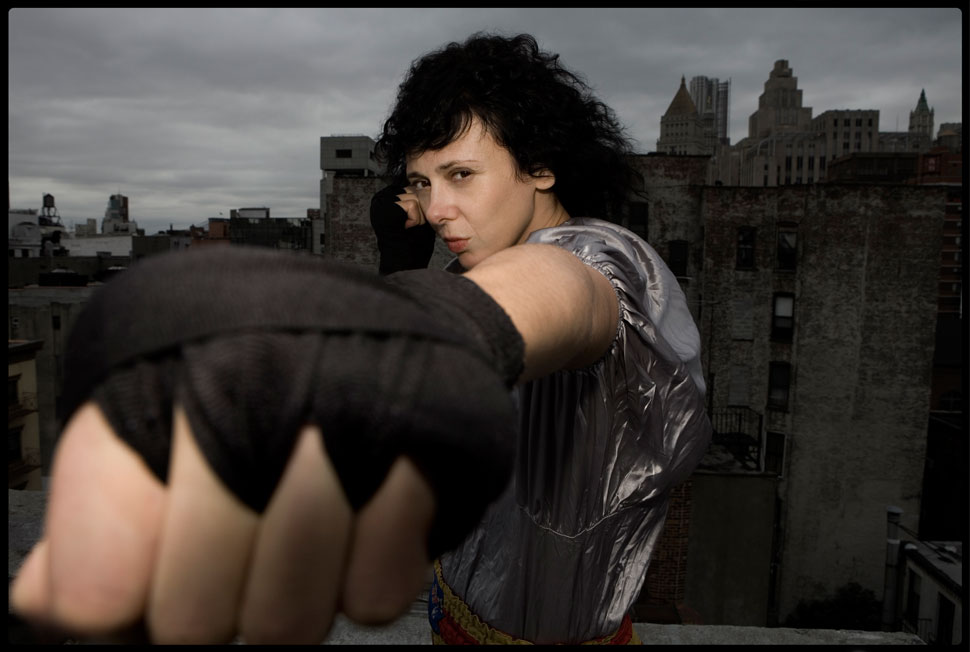 This picture was taken the day before yesterday on my rooftop in Little Italy. Chantal got in touch with me two days earlier through Facebook to let me know she was in town. We caught up after the Automatic Loveletter show and agreed that we would finally take some pictures, as we’ve talked about it for years now, but never had the time. She came around late in the afternoon, during a break in the rain. We went up on the roof and shot some pictures. This was one of them.

Chantal is a truly unique and inspiring over achiever. She was born from a French mother and an Italian father and grew up in Milan, Italy. She studied piano and violin from an early age. She then dropped music and started modeling in Paris, London, Madrid, Milan and Tokyo. She also pursued her passion for acting and photography by going to Acting School and taking photographs.

She moved to Rome and got her first acting role in ‘Traveling Companion’  which was nominated @ the Cannes International Film Festival. She went on to appear in a large number of movies before studying Shakespeare at the Royal Academy of Dramatic Arts in London and then moving to NYC, where she starred in the romantic comedy, ‘Big Apple’.

Once in NYC, as well as acting she started to focus more on her photography and also directed her first movie, ‘La Mia Mano Destra’ (My Right Hand) which won ‘Best Short’ at the Brooklyn International Film Festival. (Brooklyn has an International Film Festival??). Following the success she achieved with that, she made her first documentary, Voices Underground, on the NYC avant-garde music scene. Which is how she ended up at Nublu and singing with a variety of bands, including the Nublu Orchestra, Butch Morris’s Chorus Of Poets and In Flagranti Live amongst others.

Tired of NYC, she moved to Thailand to make a documentary on Women Boxing in Chiang Mai jail, but got distracted by training in Muay Thai, which is the toughest of all the martial arts. These people use fists, elbows, feet and knees when they are fighting. (Full disclosure: Chantal and I first bonded because I had already photographed the Lanna Muay Thai Training Camp in Chiang Mai, where she was planning to base herself). In December of 2008, this 5’10” tall woman in her 30’s became World Professional MuayThai Federation Champion in the 70Kg Division and in December 2009 she became World MuayThai Association World Champion in the 65 Kg Division.

I am now waiting to see what this remarkable individual does next with her life. To see Chantal fight, check her on youtube here: http://www.youtube.com/watch?v=MCO3D6UENBE. To find out more or about Chantal or get in touch with her, check her myspace page here: http://www.myspace.com/chantalughi.

Today I am listening to the Brazilian Girls doing Jique in a video directed by Chantal: