Last night I saw Juliet Simms and her brother Tommy of Automatic Loveletter play 6 songs at Angels & Kings, a small bar in the East Village. Even though Juliet was nursing a sore throat so couldn’t speak before the show, from the moment they hit the stage I was transfixed. She’s an incredible performer and Tommy is a superb guitarist and the two of them have a chemistry that only siblings can share. 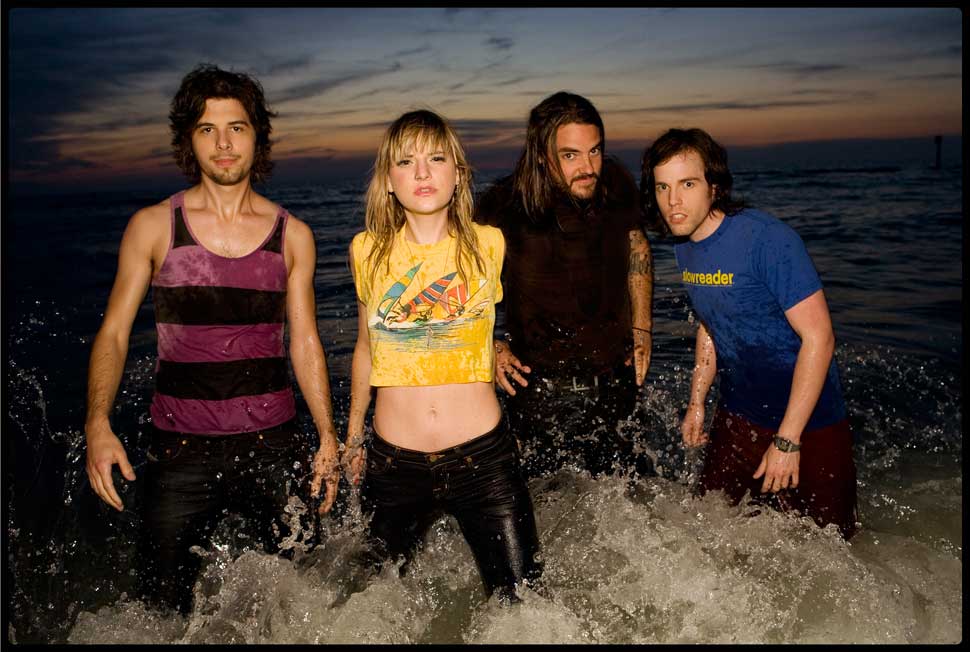 This picture was taken on a Tuesday evening a couple of months ago on the beach at Clearwater in Florida. I’d flown down from NYC earlier that day to location scout for the all day shoot on Wednesday, but suggested to the band that we take pictures as well as location scout on Tuesday afternoon and they agreed. I arranged for make up artist Andie Sleeman (http://andiesleeman.com) to work Tuesday as well as Wednesday, so we could shoot when I arrived.

From Tampa airport I drove straight to Juliet’s parents place where she was resting up for a couple of weeks. I found the band waiting for me and ready to go, as Andie had gotten there before me and already done their make up.

We all piled into the rental van and as soon as I pulled out of the driveway, I started looking for locations. Being a photographer looking for locations on a shoot can be similar to a carpenter who walks into a room looking at the way the doors and windows fit. You’re looking for a background that will enhance the subject. For a long time I’ve believed that its possible to find 6 different locations within 50 meters of any given spot. Three minutes after we left the house I found the first location, a one storey pink panelled office building that housed a veterinarians surgery.

Juliet, Tommy, Ryan and Clint arranged themselves around my camera and I went to work. From that point on it all flowed well. We shot 6 looks in the next 5 hours around Clearwater, finishing up on the beach as the sun was going down. After we got back out of the water we went back to their house where I was fed a great meal by Juliet & Tommys v cool mother, Natalie. The following day we continued the shoot and did another 7 looks before heading back to their house and going through all the pictures. The band approved a ton of pictures. Everybody was happy.

Automatic Loveletter released their debut album, Truth Or Dare, on June 22nd 2010 and joined the Vans Warped tour in July, where they consistently got great reviews for their live shows. Juliet has been through the record company wringer for the last 4 years. She was bounced around the ineptitude of Epic Records for nearly 3 years, until ALL was dropped in 2008. But she didn’t give up, she kept moving forwards.

RCA then picked up the band and put renewed faith and energy back under their wings. They recorded their album with Josh Abraham in the producers chair and now the album is doing really well and it looks like they are going to break out of the pack and achieve the success they deserve. I’m happy for them as they are bunch of great kids with cool attitude and a seriously hard work ethic. Listen out for them on your radio dial because they are already there. To find out more about them, check their myspace page here: http://www.myspace.com/automaticloveletter