Following on from yesterdays post about Sharna, I thought I’d move onto my own background. I was born in Birmingham, England and grew up there at a time when it was still the center of the Car Manufacturing Industry. In essence, Birmingham is the Detroit of England.

I’ve been to Detroit and was shocked to see how little of it has been rebuilt after the riots of the 1960’s. Birmingham had really serious riots in 1981 and 1985 in the ‘black’ area of Handsworth (http://en.wikipedia.org/wiki/1980s_Handsworth_race_riots). It’s been extensively rebuilt and it makes me wonder why the same was never done in Detroit. If anybody out there reading this can tell me, I’d be interested to know. 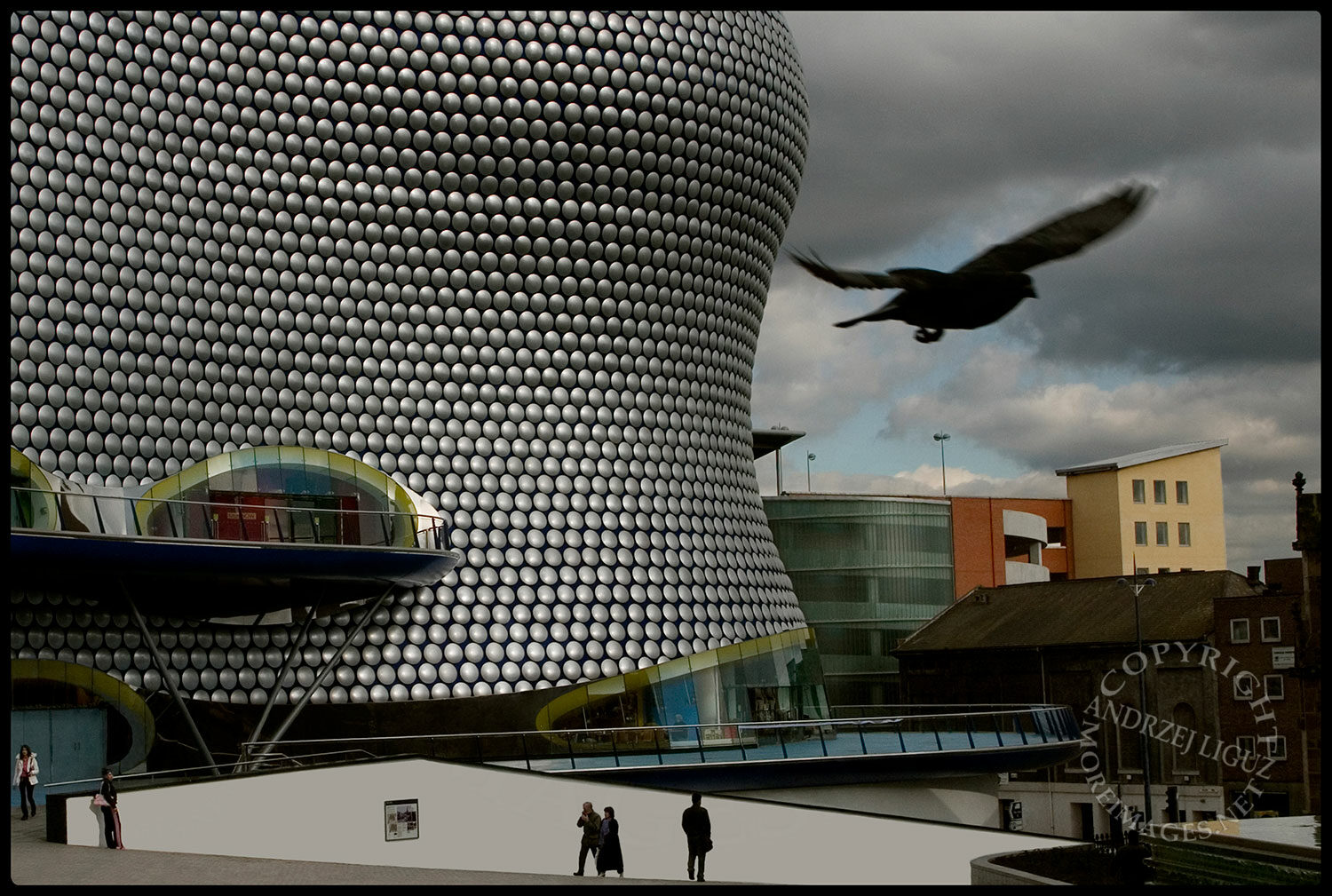 This picture of the Selfridges Department Store built in 2003 by Future Systems (http://www.future-systems.com/architecture/architecture_03.html) to replace the old Bull Ring Shopping Centre, was taken in 2004, on one of my few visits back to Birmingham since I left when I was 20 years old. The bird very fortuitously happened to fly through the picture at exactly the right moment.

It’s funny that the city used to have a shopping mall called the Bull Ring, as there were times when it was as dangerous to step in there as it would to be to step into a real bull ring.

Birmingham is a tough town. It’s where I learnt to never walk through underpasses late at night because if you do, you will probably get beaten up. It’s also the place where they developed sowing razor blades into jacket lapels, so if somebody grabs you by the lapels in a fight, they will lose their fingers.

I left home when I was 17 and was sitting in a bar a couple of weeks later talking with two girls; one was really pretty and her friend was quite plain. The pretty girl was telling me I should go travelling around Europe, get some life experience and then come back to see her. Her friend disagreed and told me I should move to another city in the same country where I speak the same language and am used to the customs as it would make the transition away from the comfort zone of my friends easier.

Being 17 and stupid, the next morning I set off hitch hiking for the south of France with £14 in my pocket. I got as far as Paris, where I ended up living on the streets for a few weeks before crawling back to Birmingham with my tail very firmly between my legs. I’ve often thought the plain girl gave me some of the best advice I’ve had in my life and when I finally regained the courage leave Birmingham again 3 years later, I moved to Bristol. That was the beginning of my real travels. And a whole bunch of other stories, some of which will no doubt surface here over time.

Today I am listening to Ku Klux Klan by Steel Pulse the first reggae band from Handsworth to achieve success, as that was a serious soundtrack in the summer of 1977