My daughter, Sharna (aka Sshh) was born on this day. She grew up in Australia and now lives in London with her boyfriend Zak; making music, creating art and writing a book. She is an extraordinarily talented individual and I watch her progress through life with great interest and pride in her achievements. Not pride because I made her this way, but pride because she has made herself this way. 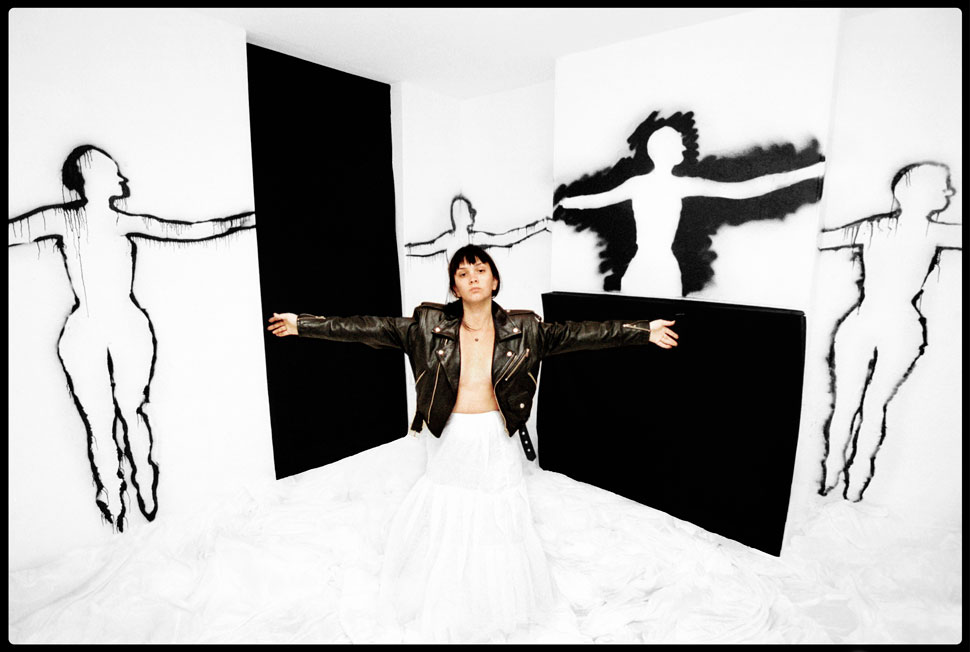 All images © Andrzej Liguz/moreimages.net. Not to be used without permission.

She didn’t have an easy childhood – her mother and I parted ways when she was very young and she ended up bouncing backwards and forwards between the two us. In total, she lived with me for 10 out of 20 years and the last time she came back to live with me, she was 14 and had teenage attitude to burn. Neither of us knew how to deal with it but in the end, we managed as parents and teenagers have for eons. Not very well.

She was going to a very average school at the top of a very steep hill close to our apartment and complained bitterly about having to climb that hill every morning. I would have done too if I was her. I was really surprised when one day towards the end of Year 10 she came and told me she wanted to go to Bradfield College Of The Arts for Years 11 and 12. I’d never heard of it and it turned out that it was on the other side of the city. I told her she could go but it would be up to her to make sure she got to college on time every day. To my amazement, she got up at 7.00am every day for the next 2 years and got to college on time to start classes at 9am and gained a lot of respect from me in the process. Don’t get me wrong, she partied hard as most college students do, but she also got her work done.

The picture at the top of this page was taken in a warehouse in Surry Hills, an inner city suburb of Sydney. Sharna was working on her artwork for the end of college Art Show. She decided to paint the walls of this room in three coats of white paint and then draw outlines of her body in black on the walls. To keep the space looking consistent, she covered the floor in white parachute material and wore a white skirt with a black leather jacket.

Once she had completed the room, I photographed her there and she also photographed it herself. She then glued the photographs together with maps of places she’d lived and key phrases onto three large canvases, each about the size of an average door. Once the canvases were covered to her satisfaction, she then coated the canvases in an inch thick layer of wax and spray painted her outline on top. The whole process took her about 3-4 weeks 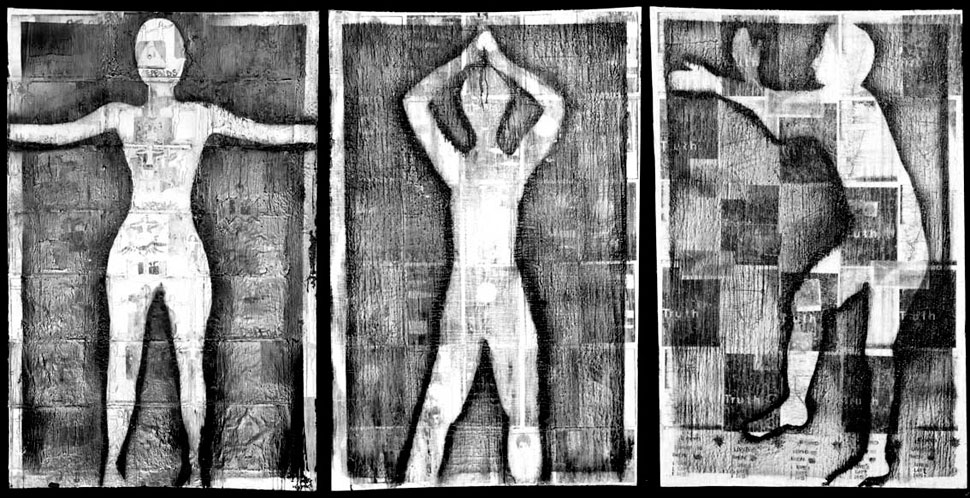 I was completely blown away by the finished triptych my 17 year old daughter had created when I saw it in her end of year Art Show and told her that I believed it would get in to Art Express, which is an exhibition of the best artwork produced by over 12,000 Senior High School/College Students in New South Wales at the end of Year 12. 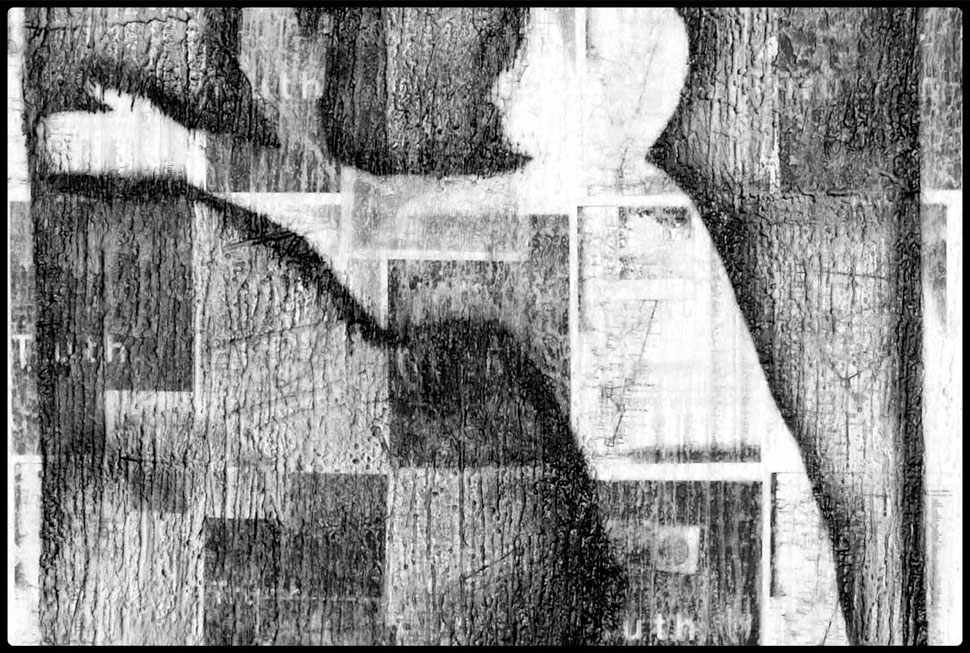 The week of the Art Express announcement I was in Melbourne for a photo-shoot and flew back early so I could go to the opening. I was under the impression that it was happening early evening, as Art openings generally do. That morning I got a phone call from a friend of mine, Britt, who it turned out was working for Art Express. She told me I was mistaken and as the Art Opening had just started, we had to get down to the David Jones store in the center of the city asap because Sharna was needed there. 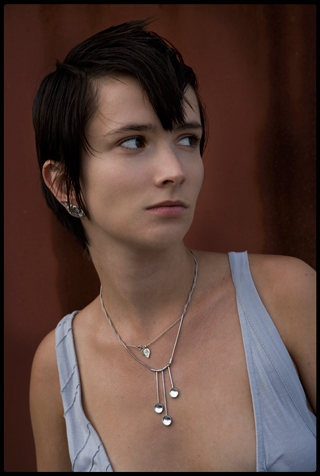 Sharna had stayed out at a friends and had quite a large night of it. I drove over, woke her up and we made our way to David Jones. It turned out that out of 12,000 students who were considered for Art Express, Sharna had won first prize. Still rubbing the sleep from her eyes, she collected a gift voucher worth $250 and her artwork was on display for the next 6 weeks in the window of David Jones, where it was seen by thousands of people every day.

She was subsequently accepted into the National Art School, where she developed a strong drawing technique and also got frustrated with the confines of art school. She moved to London to live with Zak about 4 years ago and I’ve watched her grow into a self assured, beautiful, smart and caring young woman.

It’s been a real pleasure over the last couple of years to meet people who know her independently of me and who tell me how much they like and care about her. She holds herself well in all kinds of company and I have no doubt whatsoever that over the next couple of years she will gain the success she richly deserves. Even though I know she thinks I push her more than necessary to do more and better, (as that is part of my role as her Dad), I do believe she is a very talented writer, a superb artist and a great musician. She has a band with Zak called and you should listen out for them, because some time in the future they will be on your radio.

When people find out that I have a daughter, they always ask me what she is like. For many years my response has been is that she is a unique individual in her own right. I am proud to be the parent of this extraordinary and gifted young woman.

Today I am listening to Trouble by Penguins, because it is my daughters music and today is her birthday. I wish we were in the same city so I could take her for lunch and tell her in person how I feel about her.