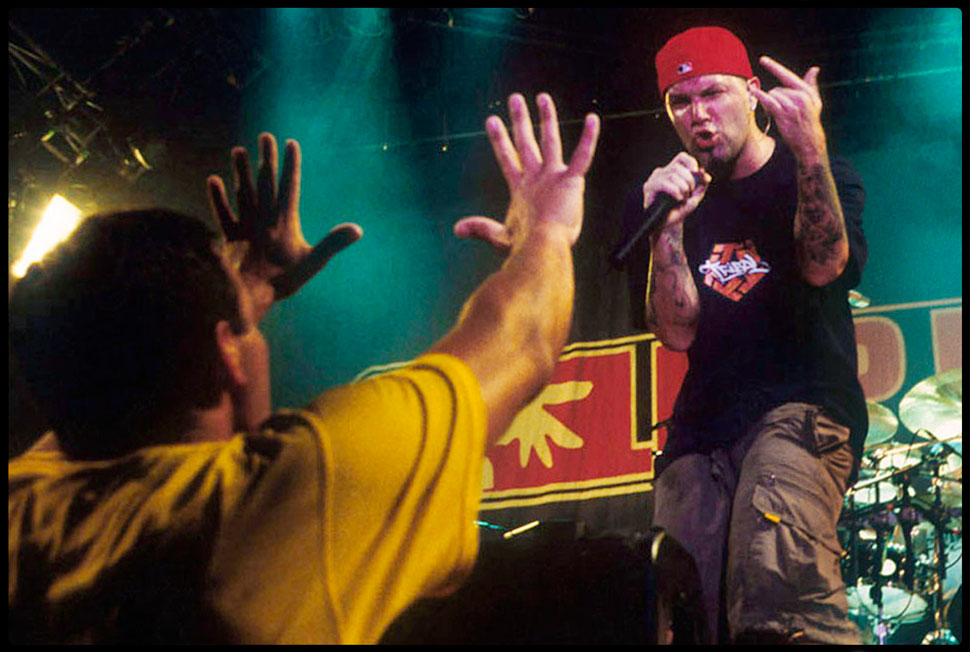 This picture was taken on 26th January 2001 at the Big Day Out in Sydney. A loss of life and a loss of innocence. Half way through Limp Bizkit’s second song, the crowd was obviously out of control and security personnel were becoming seriously concerned with the pressure being placed on the barrier in front of the stage.

One of the yellow shirted security guards asked me, a photographer, to tell the band to stop playing. I told him that he should do so himself, as he was wearing the yellow shirt and the band would be more likely to listen to him.

After hesitating for a minute, the security guard jumped up onto the camera platform in front of the stage and waved his arms at Fred Durst, asking him to stop. I took this picture as Fred Durst ignored him and carried on singing. The security guard was then hustled off the platform by two members of Limp Bizkits’ personal bodyguard detail.

The band played on even though the war zone continued to develop in the mosh pit. I went to one of the bodyguards who’d hustled the security guard off stage and told him that it was obvious local security were concerned for the safety of the fans, which was why the guard had tried stopping the show. The bodyguard then went and talked to the head of front of stage security, who then called head of production on his radio.

Once the band had finished their song, they continued to play quietly in the background for at least another 5-10 minutes as lead singer Fred Durst asked the audience to step back and help people who had fallen. Someone in the audience abused Fred Durst and they started to argue. I was so angry with Dursts behaviour I called out for them to stop playing entirely (as the Red Hot Chili Peppers had done when a similar incident happened at last years BDO). The photographers were then hustled away from the front of stage area.

People were falling over in exhaustion and being carried into the first aid area, where St. Johns Ambulance crew were tending to them. A photographer from local daily newspaper The Daily Telegraph was getting in people’s faces trying to get pictures. A guy he was attempting to photograph turned and tried punching him out. The photographer was dragged off by crew members and was last seen talking to police.

This picture ended up being used as evidence at the Official Inquest, where I also gave evidence and was questioned by various attorneys. In my opinion, Fred Durst should have been forced to appear in front of the court. But he didn’t. He appeared via a video link up.

At the end of the day, the Coroner laid blame for Jessica’s death at the feet of the Big Day Out Promoters, but also took a serious swipe at Limp Bizkit. Senior deputy state coroner Jacqueline Milledge said that Durst could have taken the situation more seriously, with his comments on stage during the attempt to rescue Michalik were “alarming and inflammatory”. To see more about this tragic day check the Wiki page here http://en.wikipedia.org/wiki/Jessica_Michalik#Mosh_pit_death

For me, I was there on the day and this picture really tells more than a thousand words.

Apparently Limp Bizkit have reformed and are about to tour again. I only have one word.

Today I am listening to The Beatles ‘Help’ in honour of Jessica Michalik: