I first met Rob Garza and Eric Hilton, the two main men behind Thievery Corporation, in October 2004 when they were in Sydney to do some promotion. We did a photo-shoot and got on so well that when I moved to America, Rob asked me to shoot the pictures for his solo album and we became good friends. When Thievery did their next album, the mighty ‘Radio Retaliation’, Rob & Eric invited me to come down to Washington DC and do all the pictures to help them promote it. 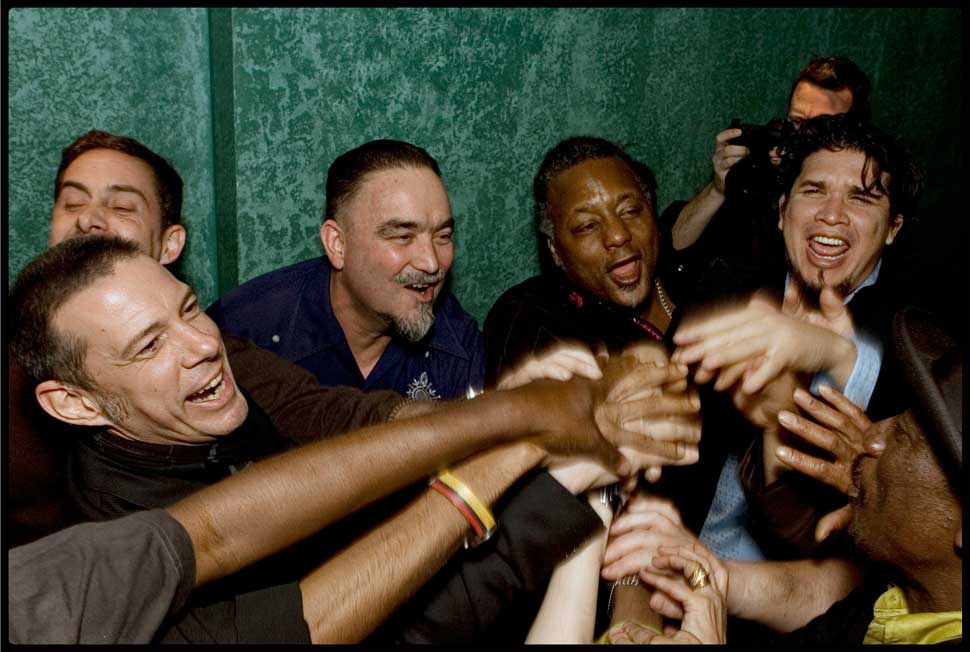 This picture was taken in January 2010, before one of the 5 shows they played at the 5.30 Club in Washington DC. When they perform live, there can be up to 18 people on stage and every night before the show, they all gather in one of the dressings rooms, sing together and join hands to bond as a band. This pre-show ritual is common to many bands, but because there are so many members of the Thievery touring band and they come from so many parts of the world, the energy generated in the air is joyously palpable. All of the touring band members carry themselves as good people and its been a genuine pleasure getting to know them.

Eric and Rob have created an inspiring organization. They have been entirely independent since they first started as DJ’s in 1995 and established their record label, ESL Music, in 1996. They record everything themselves and then strike independent distribution deals with record companies around the world. Which means they get to keep the majority of the income from their record sales, unlike bands signed to major labels. Lots of todays bands would do well to look at the example they set. They also use the platform their success has given them to promote constructive political solutions. You can find out more about them here: http://en.wikipedia.org/wiki/Thievery_Corporation and http://www.thieverycorporation.com/ (The picture on their homepage is one of mine)

And Rob and his lovely lady Charisse have just had a baby….so I wish them all joy and happiness….. 🙂

Today I am listening to Thievery Corporation doing Radio Retaliation