This picture was taken early one morning during the 2000 Olympics at the Aboriginal Tent Embassy in Victoria Park, which was set up to protest the lack of Land Rights in Australia. A little known fact is that when Cook landed in Australia in 1788 he declared Australia to be ‘Terra Nullius’ (http://en.wikipedia.org/wiki/Terra_nullius#History_in_Australia), essentially depriving the Aboriginal population of sovereignty. 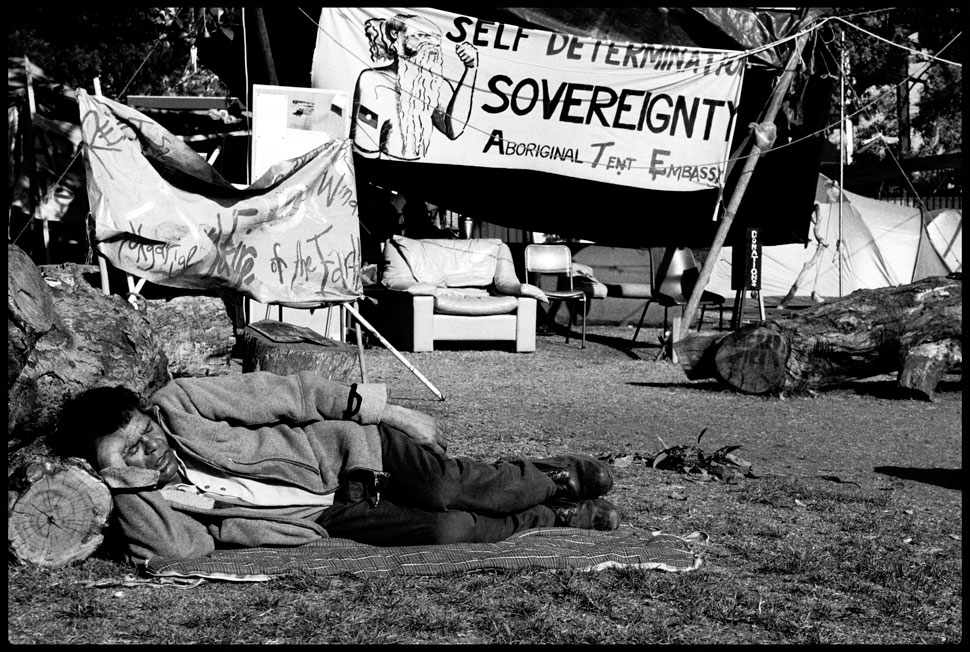 To my amazement no publication in Australia would touch my pictures, which can be seen in the reportage Gallery. There was a veil of silence drawn over the Tent Embassy by the Australian media and to my knowledge no magazine in Australia ever ran a story on it. The only journalists and photographers present were from international publications.

I am inspired to post one of the pictures from this photo essay today after watching My Asian Heart, a documentary about my remarkable friend Phil Blenksinsop. (I am not in the habit of posting download links, and apologies to film maker David Bradbury for doing so, but you can download it here).

I met Phil when I worked for The Australian in Sydney in 1988. We both left at the end of that year when I went up north to go ‘bush’ and he moved to Bangkok where he has been based for the last 20 years and ultimately become recognized as one of the greatest photo-journalists of his generation.

He always pushed me to take better pictures and has a sense of social responsibility that puts 99.99% of the rest of us to shame. His pictures are sometimes hard to look at, but always tell the truth and when I decided to spend the 2000 Olympics at the Tent Embassy in Sydney I definitely had Phil in mind. To see his work, check out his pictures at Noor Images, the Photo Agency he helped establish a few years ago.

And today, in honor of the ongoing Aboriginal situation, I am listening to Beds Are Burning by Midnight Oil