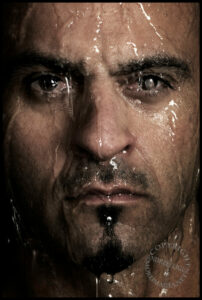 Victor Calderone © Andrzej Liguz/moreimages.net. Not to be used without permission of copyright holder.

As I waxed so eloquently yesterday about the photoshoot I did with Victor Calderone, I thought it only fair to post one of the pictures from the shoot. This image was the reason we ended up doing the shoot together. His album was called ‘Evolve’ and so when we met I suggested he have water running down his face, making it appear like he was coming out of some kind of evolutionary swamp. He was a sweet guy and got really excited about the idea and booked me for the job.

Once I showed up at his apartment (see yesterday’s pic) to do the actual shoot, he got cold feet and told me he didn’t want to do that particular part of the shoot any more. I was disappointed and told him that it would be the strongest picture of the day, but carried on and did the other pictures we had agreed upon.

His wife and child were also present and so as the shoot progressed I asked his wife to encourage him to do this particular set up and when we had finished everything else, I asked him if he would give me 5 minutes in the shower so I could do these pictures as I was here anyway and it was what we had originally agreed to do together. His wife chipped in as well and he finally agreed to stand semi naked in his shower with a stranger taking pictures of him. And was subsequently happy he had done so as it was one of these images that he used on the cover of the ‘Evolve’ album.

And today I am listening to 8 Ball by Underworld